Hail, Tyrians! I’m Karl McLain, and today we’re here to talk about the thief’s elite specialization for Guild Wars 2: Heart of Thorns™. In the expansion, you’ll be able to specialize as the daredevil, a high-evasion death machine who roams the battlefield in search of their next target. The daredevil will wield a staff, use physical skills, and take advantage of unique dodge-roll abilities against the legions of Mordremoth.

To start off, let’s talk about the overall vision and theme for this specialization. The daredevil is an up-close fighter that can engage multiple enemies at a time with sustained area-of-effect damage while retaining high lethality toward single enemies. This high-flying damage dealer has an easier time maintaining fights in close range and has the tools to turn a fight the moment they find an advantage. With its high evasion potential, we’re excited to see the daredevil zipping around the battlefield, crushing vulnerable groups of enemies, and pressing the fight forward to the end.

As it goes, thieves have a low health pool and a few different ways to supplement their survivability, notably shadowstepping, stealth, and evasion. With this specialization, we want to draw specific attention to evasion; you’ll have an extra endurance bar, bringing your total endurance to 150. Furthermore, your endurance abilities will be increasingly enhanced with the grandmaster trait line, where you’ll choose one of three different dodge-roll enhancement options:

Lotus Training
Your dodge changes to Impaling Lotus. While in combat, each dodge you use will throw daggers that bleed, torment, and cripple enemies. Additionally, this dodge functions as a whirl finisher.

Bounding Dodger
Your dodge changes to Bound, which gives you the ability to leap in a direction, dealing crushing damage at the location where you land. This dodge ability also functions as a leap finisher.

Unhindered Combatant
Your dodge ability changes to Dash, which removes cripple and chill effects from you and increases the distance you dodge. 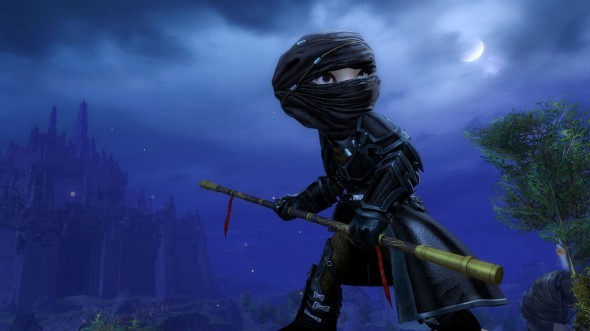 While wielding a staff, you’ll remain elusive while gaining access to regular area-of-effect melee damage. You’ll be able to make frequent use of weakness and blindness in addition to having evasion available to keep you mobile on the battlefield. Here are a few abilities you’ll have access to with this weapon:

To bolster the nature of the daredevil, the specialization will feature the use of the physical skill type. These abilities are single-target based, with a focus on disabling and eliminating weakened foes. The daredevil’s physical skills will have a variety of unique effects that aren’t normally available to the thief.

Channeled Vigor: Channel your energy to gain endurance and health per pulse. Heal for more if your endurance is full.

Palm Strike: Strike your enemy once to deal massive damage and stun your enemy, marking them with a Pulmonary Impact. After a few moments, Pulmonary Impact delivers a second blow. This ability cannot critically hit enemies.

Bandit’s Defense: Briefly block incoming attacks. If you block an enemy in melee range, retaliate and knock enemies down.

Distracting Daggers: Equip a set of daggers that can be thrown to daze and interrupt enemies. Interrupting a skill with this ability increases the recharge of the skill interrupted.

This skill is a combo. You’ll be able to deliver three strikes in quick succession to your enemies, with the final skill granting the daredevil access to the first skill-based finisher available to players. 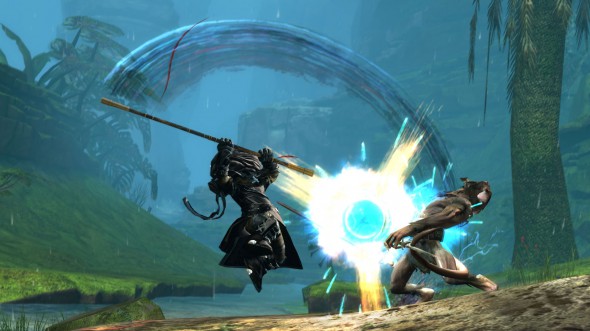 For a full list of traits, see this page: http://dulfy.net/2015/08/25/gw2-thief-elite-specialization-traits-from-game-files/

In addition to the grandmaster traits that change your dodge ability, there will be multiple other traits available to the daredevil that help bolster their in-combat prowess and enable them to constantly move around the battlefield. The first minor trait unlocks your first endurance bar, and the remaining minor traits will allow you to regain endurance upon stealing as well as gain health when you successfully evade an attack. Here are the other major traits you’ll have access to:

The daredevil presses forward. Through Mordrem, through Orrians, through enemies of the realm—felling enemies with deft blows as their tireless staves and fists fly true. See you all again soon!

This is easily the first Elite Specialization I’m genuinely excited about. I was sort of excited about Chronomancer, but that was more to do with nostalgia from remembering the first GW and the scrapped Utopia expansion. This one just looks incredibly FUN to play and beat the tar out of mobs with! HoT can’t come out fast enough!

My only complaint is the name. Daredevil? They’re really going with that?? … meh

the staff looks super fun but i doubt ill stick with it. ive always built my thief to survivability and mobility, and it has served me well. so ill probably stay with my current d/p+sb equipment, even if i take this specialization. my 3rd attack skill with d/p is already a shadowstep, and the pistol gives me an interrupt, so these traits just build on my existing….. build.

No your dodge will still cost 50 energy your max energy is just now 150. lol giving 150 energy as a max then reduce dodge cost down to 33 energy would be way too much.

Basically daredevil is all dodge and cc. I think we can confirm that everything thats been posted here over the past few days is correct meaning staff stealth attack is gonna be op as fuck.

Note that they didn’t confirm the minor traits! I’m pretty sure those are going to be the ones that heal you when you evade, and give you endurance when you steal. Couldn’t be happier about the placement of these traits! I can get everything I wanted!

That Asura reminds me of Mini ninja lol

Excited for Daredevil,Thief was my first character in GW2

They understand that the thief needs stuff to survive the frontline, yet give the squishier Tempest nothing except a few unreliable auras. Nice work, Anet.

the elementalist was never designed as a frontline fighter. it is squishy, its supposed to be squishy. but the thief counters its squishiness with evasion, and does well on the front line. they merely built on that with this.

The problem with that is they said the Tempest is frontline, and gave it melee range skills.

yea but that is all offensive. the elementalist is mostly an offensive class. even the water spells are designed to be offensive, they just also heal you and such. but dodging is a fundamentally defensive tactic. they just built on its existing utility.
and dont daggers have close range skills for ele too? so really they were just adding more options in that department.
i agree eles should have more defensive options, but i dont think its quite that bad.

It gains frontline power but still isn’t meant for it, like ele. We still awful stability so it has it’s risks.

Looks awesome and the Asura looks adorable in that mask. XD

asura look adorable in almost anything

as a Charr all asuras are the same. You can’t recognise any details.

i cant explain it but having more dodge is really weird. almost like cheating.

not really, when you consider before the trait overhaul there was a trait that returned part of your endurance every time you dodged, allowing you to dodge way more frequently, and three times in a row from the outset. they replaced it with a vigor thing but its not the same.
this basically just gives us that back, to an extent, so its not much different from before.

I miss that trait so much… Miss gettinbg might, speed and endurance back when I dodged

All new spec have more powerfull F1, thief dont but have incrased dodge.

As your final act before unlocking and permanently equipping daredevil, your thief needs to be downed while failing the pre-event for the inquest golem – resulting in the swamp being flooded with toxic chemicals.

Then you equip a blindfold.

nerf in 3, 2, 1…
this will be fun to play and annoying to play against. catch that dodging, jumping, stealthy bugger.

Reminds me little of the staff powerset in CoH.

Looks pretty cool. Makes me a little more hopeful for the ranger and engineer elite specs.

eh, wish they actually gave thieves a new concept then just expanding what they already have.

I just realised the way that asura wielding that staff is different from the usual way of wielding it.

All elite specializations are expanding the mechanics that priofessions already have.