From Sept 10 to Sept 13, Mordrem will be staging periodic invasions into selected zones. 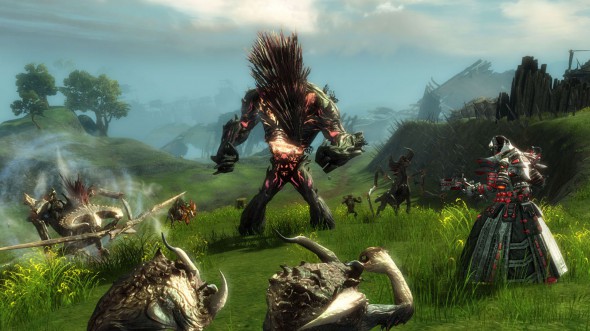 Mordremoth is rallying its forces, sending armies of Mordrem out of the Maguuma Jungle to test Central Tyria’s defenses. Drive back the invasion, and stop the jungle dragon from sinking its teeth into vulnerable territory!

From 9:00 a.m. Pacific Time (UTC-7) on September 10 through 9:00 a.m. Pacific Time (UTC-7) on September 13, Mordrem will be staging periodic incursions into Brisban Wildlands, Kessex Hills, and Diessa Plateau. Keep an eye on the world event UI, which will let you know when Mordremoth is launching its assault. Coordinate with other players to stop the Mordrem in their tracks, and you’ll earn Mordrem Blooms. Mordrem Blooms are the research samples the Durmand Priory seek. In exchange for the research samples, the Durmand Priory is offering concessions as a reward.

This event is recommended for players level 18 and up. If you’re just starting your journey into Tyria, you can prepare by exploring the game world, completing maps, learning your character’s abilities, and making friends to join forces with during the invasion. Guilds will be seeking new members, so be on the lookout for one that’s right for you! In addition to all the perks of guild membership, you’ll have allies on your side during this tumultuous time.

ArenaNet developers will be joining players in the game throughout the invasion, so look for the red ArenaNet logo, and be sure to say hello. We’d also love to see your screenshots of the event, so tweet us your favorites @GuildWars2 or submit them to the official Guild Wars 2 Tumblr! Our team will be sharing the best of the best through our social-media channels through the week of September 13.

20 replies on “GW2 The Mordrem Are Coming”

Any idea if there will be special rewards for this?

Likely to be these

[&AgGHEgEAAA==] Memories of Scarlet Box – Contains components for the crafting of spinal blades and items from Scarlet’s assault.

[&AgGBEgEAAA==] Arid Dusty Satchel – Contains components for the crafting of Mawdrey and items from the Maguuma Wastes.

Spinal blades? THE ONE EVENT I MISSED! SWEET!

You can still do spinal blades just have to camp a bit in the jp. As long as you do that regularly it’s not too bad of a wait. I am making the 3rd or 4th set right now before the final ascended version from camping that.

Which JP? o.O I’ve just been going by the gear node in my home base!

Not So Secret in Gendarran Fields.

and aertherblade from center of Edge of the Mist WvW Map

There is a Mystic Toilet recipe for blade shards, just need a heap-ton of sprockets and a bit o dust. the hard bit is getting them coloured node things for the later stages, kinda wishing I hadnt sold my red ones…

Because they used the word concessions, so I pictured them running a stand selling fairy-floss, ice-creams and slurpies.

hi dulfy, do you know if there is something else if you arleady got spinal blades (4 colours yellow, red, blue, green) and maudrey)
could we get Scarlet rifle from Memories of scarlet box for example ?
or unidentified fossile from Arid Dusty Sachel ?

will there be a bag for the past event Marionet, so we could get Keeper’s recipes ?

“”you’ll earn Mordrem Blooms. Mordrem Blooms are the research samples the Durmand Priory seek. In exchange for the research samples, the Durmand Priory is offering concessions as a reward.””
Maybe something like the halo or horns? hopefully something more than “potion of mordrem slaying” although, even that might be handy against them ” need mastery to get through armour” blokes.
Just wonder what the Devs have against Kessex Hills….

You do realize they said september 10, fallout releases november…

Ooo it starts on my birthday! Thanks Anet, I knew you cared!

TBH they shouldnt be doing this in Kessex Hills, considering it’s still affected by the toxic spores (unless this event is replacing them..?)

Anet hates Kessex Hills!! a year or two from now, when the focus shifts to Primordius, destroyers will overrun Kessex and set it all on fire!

“Quaggan was born in, and now will die in, stupid Kessex Hills!”