A guide to the GW2 Mordrem Invasion event running from Sept 10 to Sept 13 in Brisban Wildlands, Kessex Hills, and Diessa Plateau.

Events are starting 30 minutes past the hour and only last for 30 minutes. Rewards seems to be handled out after the invasion has finished in a zone and based on the number of Mordrem incursions you have defeated personally.  The event has been patched and you should be able to get rewards properly now.

The event rotates between maps, here is the pattern so far with an hour break before repeating. 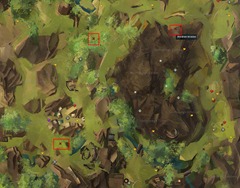 You get a stacking buff called Invasion Defender which increases with the number of invasion events you have defeated. This might regulate how much Mordrem Blooms you will get at end of the invasion.It might be worth it to hop between different events to get more stacks.

We have been tracking player response and recognize that this event has not gone as intended. We’re at a point where we can’t change anything more about this event for this weekend without risk to the greater portion of the game. We also are going to postpone our plans to organize an in-game event around the Mordrem Invasion this afternoon. Instead, we’re going to continue to monitor for your feedback and collect information that will help us improve on these types of events going forward.

As we mentioned yesterday, we will be taking care of those of you who did not get your rewards, so look for those in your in-game mail in the coming days.

We encourage all of you who’ve participated in the Mordrem Invasion to please share your constructive thoughts on how we can improve on these types of experiences in the future. Please share your ideas and feedback in this thread.

Not getting rewards before the hotfix patch

Note: Arenanet is aware of the non-reward issue. They are working on a fix.

Dang Mordrem. They’re EVERYWHERE! They even got into the code and did bad stuffs. 😉

Seriously, we’re really sorry about the non-reward issue! The team is aware of the problem and is working to correct the issue as soon as possible.

We know that some of you are experiencing issues with the Mordrem Invasion Event. A few notes:

Note 2: Another response from Arenanet on the bugged rewards issue.

Next to these waypoints you will find the vendor that will give you rewards in exchange for Mordrem Blooms and coins. 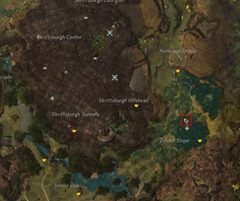