MMORPG was able to reveal some details of the Engineer elite specialization, the Scrapper.

Scrappers gain access to hammer, new toolbelt skills, and floating gyro bots. It give the Engineer an option for close ranged combat and an electric theme. in raids the Scrapper can be traited to lock down enemies and grant super speed to allies in combat.

Here is the full article on MMORPG.com, below are the relevant details. 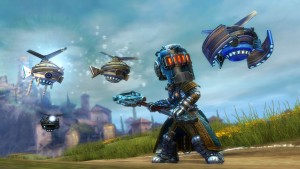