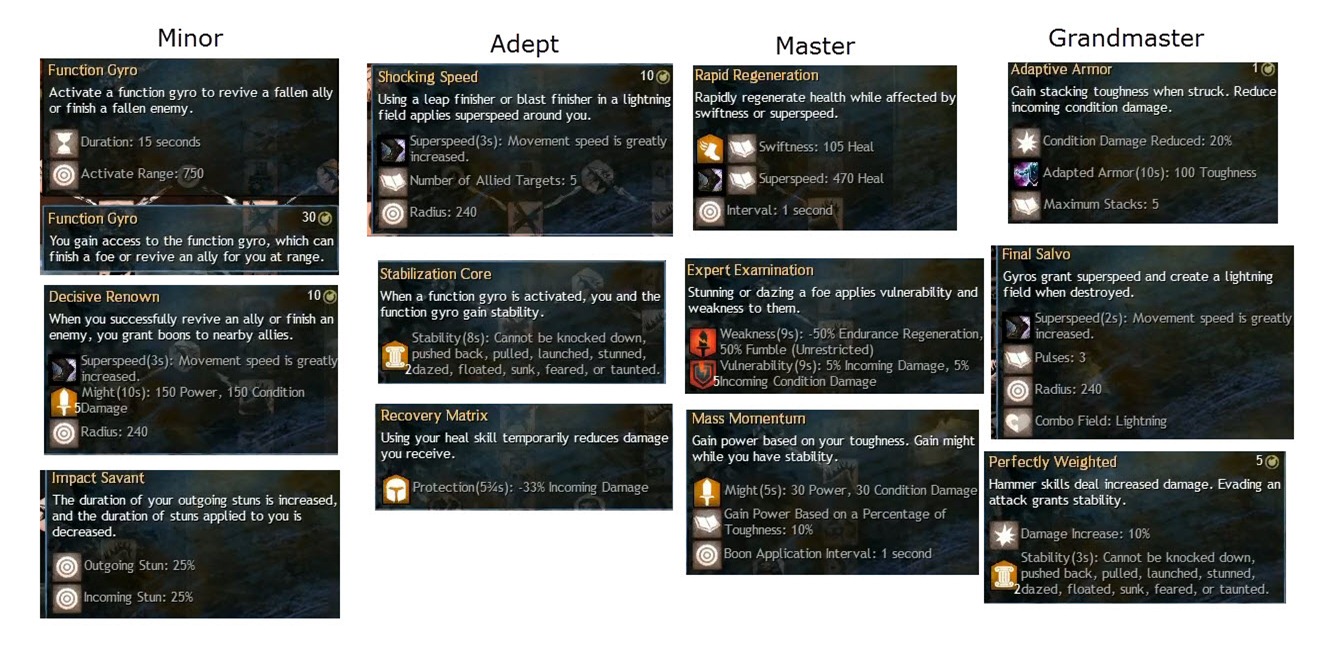 It actually gives you 40 sec…

34 sec
at max. taking it gives the last puls on it’s las second of life. being it the 30th second.

Finally someone who knows math 😛
Though in actuality you cannot use this gyro to maintain perma-stealth in let’s say Arah dungeon. Because enemies CAN see the gyro and destroy it, leaving you with only 1-4 secs remaining on your stealth.

But if it pulses 4 second stealth every 3 seconds, wouldn’t it have an extra 1 second stealth after each pulse that continues to stack until the gyro is destroyed? (At least until the cap on stealth duration stacks is hit, but I don’t know when that is.)

As for it’s practical use, yeah I don’t see it being used to skip fights in current dungeons unless it gives a smoke field or is paired with other stealth skills. On the other hand, it might be amazing for ambushing in Wuv, despite the visibility of the drone, because I don’t see a target limit on it’s tooltip.

Time doesn’t freeze while stealth is applied :P. It applies 4 seconds of stealth per pulse yes, but older stealth stacks do expire in the meanwhile. It’s basically 3 secs x 10 pulses (to match the duration of 30 seconds) and +4 seconds from the last pulse.

Hi, I have no research but I know boons like swiftness stack duration. Lets say t=0 apply 10 sec swiftness, t=5 apply 10 sec swiftness, at t=5.00001 you will have ~15 sec remaining. By your maths stack one ends at t=10, stack 2 ends at t=15, no swift from t=15. In game you have swift until t=20.
And also I know stealth works similarly since dropping a smoke field and multiple blasts is one of the main reasons for bringing a thief. The smoke field lasts for only 4 seconds, blasts in in it grant 4 seconds of stealth. But commonly people raise their stealth up to 20+ seconds.
So t=3 apply 4 sec stealth, t=6 apply 4 sec stealth, … , t=30 apply 4 sec, means stealth up to t=40. ie. 40 seconds of stealth.

PS. I do know that auras work as you describe, applying multiple fire auras does not mean you have extra long aura, t=0 apply 5 sec of aura, t=3 apply 5 sec aura, first aura is replaced, duration remaining 5 seconds. So I understand the confusion and may be wrong with my conclusion above, however nerfing stealth to your stack method will destroy thieves.

Right math, but forgot t=0 is an application, so 11 total (had to go back and verify you get stealth immediately on use)

AutoAtacking he maintains 11 Might and 16 Vulnerability, I am afraid with the health pool of the Bulwark Gyro, Purge Gyro remove 2 conditions Evry 3 seconds, and Sneaky Gyro gives infinite stealth? Really?

Heh, I have an Engineer, and even i admit reading some of these descriptions, the Scrapper sounds like he’s going to be OP. But we’ll just have to see how it plays before we know for sure.

This is what a real Elite specialization looks like! In your face Dragonherpderp!

No more Ranger in sPvp :/

I think the gyrocopters could have had more creative/interesting abilities (pulsing knockbacks, laser targeting that applies weakness on targets, hologram decoys, etc. etc.), but otherwise, it’s a solid elite spec.

So glad I made an engineer

So very happy I made a Juggernaut forever ago. So. Very. Happy. Have a feeling things gonna get nerfed before launch though. Just seems too good.

They’d said they weren’t like Guardian spirit weapons. It’s true they’re not exactly the same but they are actually quite similar in function. Personally not one of my favourite ability types so that’s a big bummer for me.

And seriously, what was the point of telling us the drones have “limited fuel”. Just say “they have durations”…. like other abilities, eg. Guardian spirit weapons. I was expecting some sort of new fuel mechanic.

I don’t mind the F-key mechanic. It’s not game-changing but could be handy. I like the hammer 2 whirl finisher. Useful.

Not to my tastes – mainly because of how they did drones – but I’m sure some will like it.

Now it’s down to druid….

the reason why they say gyro has limited fuel is because they are machines, they ran on fuels or petrol! they say it that way as like a metaphor… DUH! Think of them as miniature motor vehicles!

Yeah, obviously they’re machines. But saying they use fuel is much less clear than just saying they have limited durations like spirit weapons. So I (and others, eg. see below) were expecting some kind of fuel system.

Personally I’d have much preferred necro style pets, i.e. unlimited duration. That might have been enough for me to buy the expansion. I’ve tried guardian spirit weapons and find them too tedious.

Kits and turrets are two of my favourite utility types in the entire game. Elixirs and gadgets are also decent. I’d rank gyros below all of them. Not that they’re dreadful but for my tastes they add very little to the profession.

Wonder if gyros will work similar to other summons, aka. cooldown starts when they disappear

This is by far the best specialization they have done…and the first to give me that feeling of actual visible progression of you class. The rest? Apart from Revenant all are clunky and lackluster making their base-specs much more appealing.

Also it’s pretty much confirmed engi has 10x better lightning animations then a “tempest”..the irony is over 9000.

Good thing i have 1 of each class maxed out. (except rev)

I think I might have finally been able to make a decision on a legendary weapon. These abilities sound awesome(and really strong. 500 toughness just like that? range finisher, free might stacks, projectile reflect, gap closer. really cool set of abilities)

now I just have to decide if I keep my sylvari engineer and lvl him up to 80 or get any other race >.>

Omg a hammer that can dps, engineers got a lot of love, and gyros are very cute XD

Woohoo! This elite spec, yes!
Does this mean I can put on soldier on armour and 2 trinkets and the rest zerker?
Wanting some extra defence and whatnot for when going up close.

These gyros dont seem to be much more than just normal every day skills with a more physical representation.

Whats the difference between using an exploding gyro and using an elementalist fireball for instance?

Could Anet go back and look at Tempest and Dragonhunter, having the people who designed this redo them to make them half as good as the Scrapper? This is just beautiful.

You overlook that engineers cannot swich weapons. All the possibilities the option to mix 3-4 weapons on Dragonhunter I think is in balance with putting enough power and utility on a single weapon (Scrapper). Pick a Hammer with a Scrapper, good luck with the kiting ranged enemies. About Tempest… well yeah the whole thing sucks, it’s basicly a “press this button to do some big explosion with this element” and that’s it.

Hmm *cough* …. scrapper have everything against ranged characters, in fact he counter them …

You don’t kite ranged enemies, you kite melee enemies. Kiting means staying at range, exploiting/utilizing range to receive little to no damage while dealing a bunch of damage to the person/monster you’re kitting……..

Mortar kit/ Grenade kit has us covered in that regard.

Besides our current setup doesn’t give all much counter-play vs ranged foes anyway it’s more of a situation of who dps/reacts the best.

Hammer gives us a Block, Reflect, Gap closer/Evade all the tools needed vs ranged foes.

I’d much appriciate if you wouldn’t have stolen my avatar.

Stolen? Are you the creator of this peace if not then you have no right to make that statement. Your avatar? All i did was type “sylvari” in deviantart.com and the original is this http://www.deviantart.com/art/Fall-Sylvari-253498785
If anything it’s both of us using this picture as our avatar because lets face it, it’s beautiful!
I didn’t even know you existed until now and might i add i care not.

Either that, or just straight up use more appropriate English. Use things like hyphens, or change the sentence structure.

English isn’t even my 1st language, and I get this fact.

<– my dads buddy just got a nice six-month old Mercedes E-Class E63 AMG from only workin part time online… find more information It’s been six months since i started this and i made so far total of 37,000 dollars. Basicly i profit about 80 dollars every hour and work for 3 to 4 hours a day–>,…,

Wow… that elite is just… so vary wow….

Okay, this is probably the most impressive specialization that i’ve seen of the lot. Except maybe chronomancer. I rescind my earlier comment along the lines of engineers being beyond all hope, and i look forward to testing this on the live servers!

Okay, the backstory almost redeems the horrid name. Further redemption will be dispensed if Rytlock fails to appreciate the contributions of an NPC scrapper in game.

I might actually try a scrapper for my condition engineer in pvp – utilizing not a single element of the scrapper besides the function gyro. I won’t claim that a dual pistol, balthaar rune engineer is competitively viable – but it does have a blowtorch skill that burns for more damage then it has health. Being able to distract enemies with a mobile murder bot (instead of striking dramatic poses over fallen enemies myself) should give me a bit of tactical breathing room in tight encounters.

Unless those new condition/meat tank necromancers gain anymore popularity. Lord knows how you supposed to kill those things.

Scrappers gonna nerf, it’s too op! As much as I will definitely gonna enjoy and love this elite, but to me it seems bit too much! I’m pretty sure they are going to make the autoattack speed bit slower than it is. Whilst for Thunderclap… I think it should be non-ground targeting or within 1000 range (same as Rocket Charge). Stealth Gyro should have much lower health pool or last for <15s. As for the traits, I think Mass Momentum should have a cooldown.

Sure the hammer dammage seems to low at this moment;) but it´s just the first try.

Sinister Condi Engi running Shredder Gyro combined with the firewall from Flame Thrower, lightning field from the toolbelt skill or the waterfield from the healing turret could be a very very dangerous thing for PvE! Keep an eye on this one folks! 😀

If the Gyro survives the attacks 😀

<– my dads buddy just got a nice six-month old Mercedes E-Class E63 AMG from only workin part time online… find more information It’s been six months since i started this and i made so far total of 37,000 dollars. Basicly i profit about 80 dollars every hour and work for 3 to 4 hours a day–>,,,,,,,gjhgh,,,,,