A guide to claiming the Guild Hall in Heart of Thorns.

To start the Expedition, make sure you have 100 gold and 150 favor first. Favor can be earned via guild missions. Head to the Guild Initiative Headquarters in Lion’s Arch and talk to one of the two NPCs. One of them is for the Lost Precipice and the other is for Gilded Hollow. 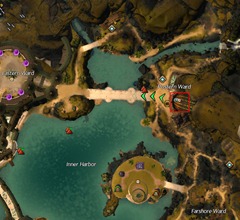 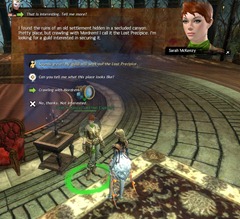 You will need to have 100g and 150 favor to start the Expedition. 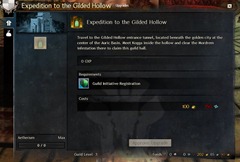 Getting to the Guild Hall Portal

Lost Precipice portal entrance is in NW corner of Verdant Brink. You will want to have unlocked Faren’s Flyer Waypoint in the SW corner of the map and then follow the dotted line to the portal by combination of gliding and walking up stairs. If you have a teleport to friend item, you can wait for a guildie to get there first and just teleport to them. This is a much easier location to get to. 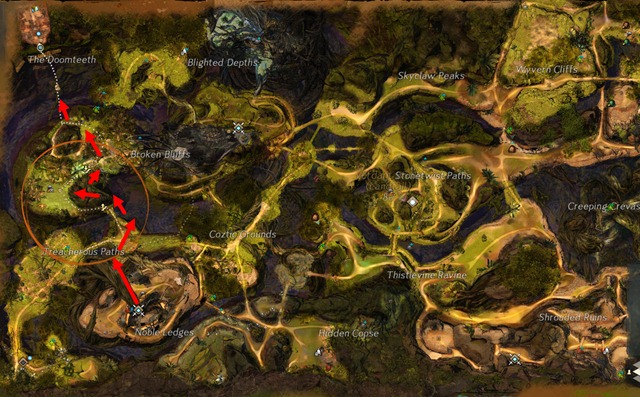 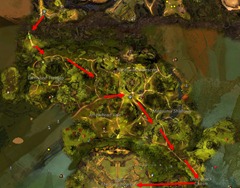 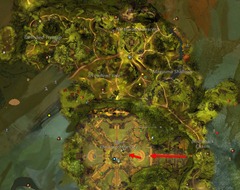 At the very center of the city, you will find a hole in the ground that you can drop down to access the lower city. 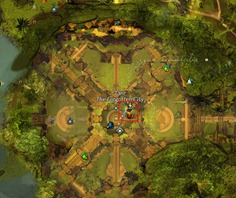 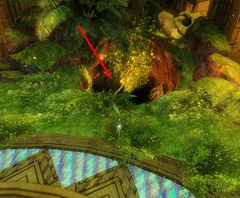 Once you are in the lower city, follow the dotted line. You will find the way to the portal blocked by an invisible wall. To get past it, you must have Exalted Markings Mastery to use the teleporter. Luckily only one person in guild needs it and everyone can just use the teleport to friend (Mesmer portals also work!) 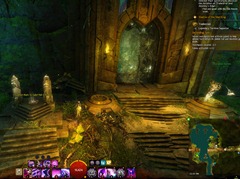 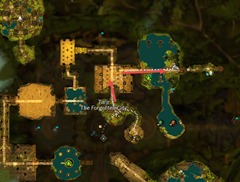 This part is similar for both guild halls and the event scales based on how many players are in the instance. Gliding Mastery is not required but it will help to get to parts of the guild hall much faster so you can meet the time limit requirements. There are two parts to this. 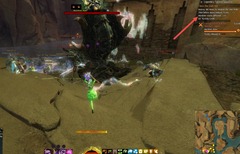 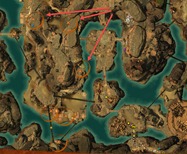 If you fail to kill the Mordrem Maw within the time limit, the air toxicity level will rise and everyone inside the instance will all be killed. Luckily you can retry this how many times you want. Another thing you have to watch out for are the Mordrem mobs defending the Mordrem Maw that can shield the Maw from damage until they are killed so you will want to kill those ASAP.

After you have cleared 5 waves of Mordrem Maw, prepare for Vinewrath Knights to spawn. These are Champion/Legendary Mordrem bosses. How many spawn will once against depend on your instance size. For an instance of 50 players you can expect 3 of them to spawn. All of these Mordrem bosses have a break bar and some are only vulnerable when that break bar is broken so you will need to constantly apply hard CCs to break that bar. Others are extremely melee unfriendly so you will want to have ranged weapons as well.

You do have a bit more time to kill these Vinewrath Knights The time limit was 8 minutes for the particular instance we had. 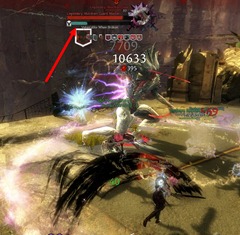 After you defeated these Mordrem bosses, you will be able to interact with the crystal in the guild hall and finally claim the guild hall.

Tavern is the first thing you will build for your new guild hall. Talk to the Tavern Proprietor to get started. He is also the NPC where you can view other upgrades for your Tavern

You will need the following materials to complete the first restoration. Guild members can donate materials to help this via the guild treasury. 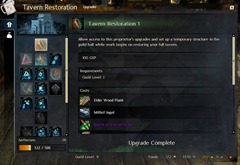 Empty Kegs are crafted by Chef (400). The recipe is automatically known so you do not need to purchase any recipes. It requires 10 Elder wood planks, 10 Mithril ingots, 3 Vial of Linseed Oil per Empty Keg. Linseed Oil requires Flax Seeds which can be found in the new maps. Milling Basins can be brought from the cooking vendors.

You will need to have completed Tavern Restoration I and then you can proceed with this building process that will costs 150 Favort and the following mats. 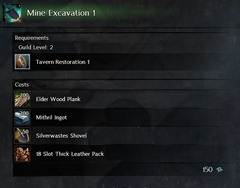 You will need to have Mine Excavation I completed, 1500 Aetherium and 150 Favor are also needed in addition to the following mats. 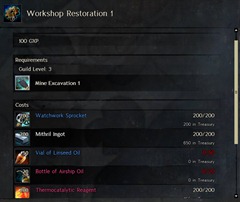 There are more upgrades for the Tavern/Mine/Workshop that give buffs to the guild or improve that particular structure. They can be found under each particular tier of Restoration. Which one you need will be something you have to decide to have. They all cost Favor to build and some may require Aetherium as well. Aetherium is time gated and there is a favor cap of 2000 per week so you will need to carefully manage and decide on what to build. 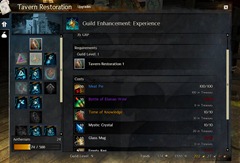 Special thanks to Ethereal Guardians [EG] Guild for the info on guild halls.