GW2 Heart of Thorns Act 2 Story achievements guide. This is a work in progress.

While being pursued by the Mordrem beast, avoid taking any hit. The best way to do is this to get ahead of the Ruka NPC as waiting for him will spawn things that can make this achievement very hard to do. You need to have an idea of where to go and once Ruka get on the ledge with the Mordrem wolves below, do not follow him. Instead, use your #1 skill to directly leap to the top and doing so will avoid spawns of Mordrem tendils which will make this achievement very difficult. Other than that, the only thing you have to becareful is avoiding the traps and run between the red circles to not getting hit by them. I use the #3 leap to get past the first circle since it is hard to navigate.w 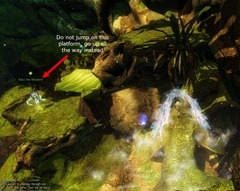 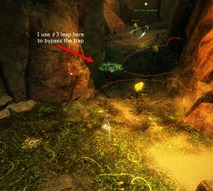 A bit tricky achievement. You need to gather all 23 blue orbs that are out there. After the Mordrem wolves/tendrils on the ledge you should have 8 orbs. After the first open area where you need to glide past you should have 14. In the narrow section with the plant traps there are a bunch more at the top so keep an eye out. You should have 20 orbs after passing through the traps section. Follow the video if you need. Keep in mind that there is a buff you get while doing this achievement that keeps track of how many orbs you have gotten.

Complete the trial of strength with no deaths. This trial of strength achievement is pretty easy. Make sure you have a ranged weapon and some cripple/immobilize as most of the mobs that spawns are pretty easy to kill from ranged. The only one I really had trouble was the Destroyer Harpy that spawns first as he evades attack and launch fireballs at you that are hard to avoid. Remember that your heals do not work while in this trial. Also watch out for mud puddles on the ground that will cripple you and don’t stand next to the trial altar as rocks will fall down and knock you down.

The five mobs you will get in this trial are Destroyer Harpy, Icebrood Elemental, Risen Plaguebearer. Branded Minotaur (watch for his charge), and Mordrem Stonehead (also charges). 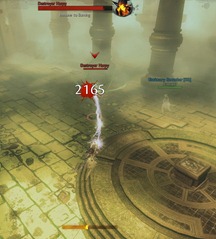 This achievement sounds hard since you have to navigate a maze under a certain time limit but it is actually pretty easy thanks to gliding. To the left of the maze entrance is series of steps you can climb on and basically glide to the top of the maze and work your way to one of the objectives. Make sure you have swiftness as you will be put in combat and will not make the jumps between the walls that make up the maze otherwise.

Defeat all the Mordrem mobs in the teamwork trial. Make sure you kill all the normal Mordrem wolves before you kill the alpha or you will fail this achievement. If you use the “cheese” method you can do this achievement at the same time as Leave it to Me painlessly by having your party members kill all the wolves in normal form.

This is a pretty painful and tedious achievement if you attempt it solo. You need to complete the trial by killing the marked Mordem while in rabbit form. In rabbit form you have only #1 attack skill so it can be really tedious if you try it solo (prepare to spend anywhere from 30 minutes to 1 hr). Bring friends to make this quicker and less painful.

If you have any Fire Elemental Powder or Ogre Pet Whistle it is time to bring them out as they will help you immensely with this. There is another way to “cheese” this by having the instance owner stay at the start of the room without going in and everyone else in the party go and kill the Mordrem wolves. No one will be transformed into the rabbit form as long the instance owner does not move once you get ported into the trial room.

This achievement appears to be bugged as reaching Taimi without getting hit by the two sets of traps did not grant me the achievement. For the traps it mostly comes down to RNG and a bit of practice. I find it helpful to move as soon as you see an empty space in the next row of traps. Swiftness helps too. You don’t really have the time to dodge if a trap spawns under you as the trap basically triggers instantly. Mesmers can cheese this by using double blink with mimc. Same applies to other glasses with blink like abilities. 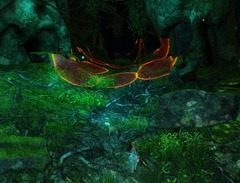 For this achievement, you need to kill the Mordrem wolves only using the skill you get from the pad that the Mordrem controller is standing on. You need to basically displace one of the Mordrem controllers away from the pad he is standing by either crowd control abilities like push/knockback or kill him without killing any of the wolves.Once the controller is no longer on his pad, you can hop on it and use the #1 skill to basically one shot all the wolves for the achievement. If you attempt to jump on the pad while the controller is standing on it, you will be knocked off it. Make sure you don’t use any AoE abiltiies here as the mordrem wolves have very little HP and if even one dies not via the pad ability you will be disqualified for the achievement. 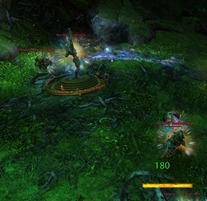 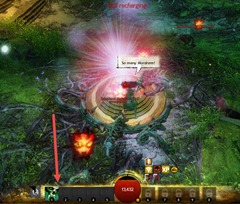 Help Taimi collect saurian bones without using more than 4 mushrooms. I am not really sure how to fail this achievement as all you do is collect a Tasty Mushroom outside the cave and throw it inside the cave with the #1 skill to spawn a random creature that will drop the saurian bone once killed. Once you have the bone, just interact with one of the pillars with the green star. 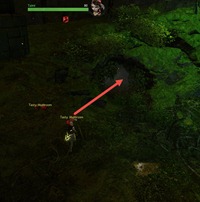 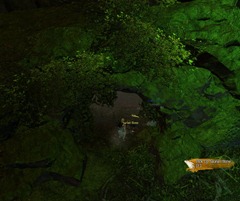