Hatred Assassin plays as a medium range melee fighter, specialized in dealing a mixture of force damage as well as melee damage.Unlocking this Discipline’s maximum potential requires a fine balance between spending time in the thick of the battle and spending time at medium range from your enemies. Hatred playstyle is very different from Deception and requires a lot more situational awareness due to the fragile nature of the Discipline in terms of raw damage reduction. If you enjoy playing at medium to short range with access to some of the most powerful DoTs in the game as far as PvP goes, then continue reading onward!

in 4.0 has taken a large turn in the opposite direction compared to the 3.0 era. Critical Rating is now much more valuable than before because it now increases both critical chance % as well as surge %. Accuracy is still unused in this Discipline, so refrain from taking any accuracy. Lastly, while Alacrity is still a decent stat, the new Critical Rating stat has simply proven to net greater gains than Alacrity. Because of this, I recommend gearing in a full power/Critical Rating set of gear. You can afford to take 2-3% Alacrity. At the end of the gearing path you will have so much Critical Rating that your DoTs will have a 50%+ Critical Chance and your melee abilities will have a 45%+ Critical Chance. This is almost 3x the amount of Critical Chance % that we had in 3.0. This has greatly increased sustained damage as well as made our self-heals from damage more reliable, which means an increase in survivability. Due to the large amount of Critical Rating that you will be taking your burst windows will also be even more potent, rivaling levels of burst that Deception has access to.

As far as augmentation goes, I recommend Critical Augment 40. If you want Alacrity in your build, feel free to use a couple Alacrity enhancements as well in order to hit the 2-3% mark, but you can completely forgo Alacrity if you wish to add more burst to your build through increased Critical Rating. Power augments are still a viable option if you wish to see a higher bonus damage number on your stat sheet, but in practice, the increased Crit % and Surge % are the more attractive option for this Discipline.

The math behind relics and augmentation can be found here.

Utility choices will vary based on what type of PvP you’re partaking in and most importantly your personal playstyle. While Deception has a large array of choices for utilities, Hatred only has a few viable utilities to choose from. Hatred really lacks in the defensive department and because of this, you will want to choose utilities to help boost your defenses. 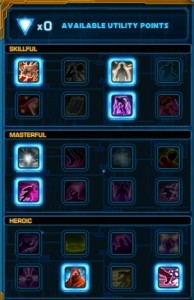 *Note: Dark Stability has been nerfed from 12 seconds in duration down to only 6. Because of this, it’s not worth taking in my opinion. 6 seconds of immunity every 2 minutes is simply not worth it. Most of the AoE CC that this utility would prevent you from being caught in can instead be avoided by having superior positioning skills during a fight.

In PvP there are no ‘real’ set rotations. With that being said, there is a basic and generic order to use your abilities:

At this point, you will reapply your DoTs and attempt to DoT spread again via Lacerate. Ability usage in ‘Lacerate/Thrash’ blocks will depend on how many enemies you can hit. If you can hit multiple enemies use Lacerate, in single target situations just use Thrash. Sometimes an enemy may purge your DoTs, in these situations you will want to reapply them via Lacerate while hitting another enemy that already has DoTs up. If they are out of range of another player with DoTs on them, manually reapply the DoTs before starting your single target DPS rotation using Thrash. Leeching strike is best used when you need to recover at least 4k HP so that the self-heal isn’t wasted.

Doing this general rotation will net you maximum possible DPS. Here is a picture of a Solo Ranked match where I was Hatred.

With better offensive cooldown management, I could have pushed 5k DPS or higher probably. This is just to show what this spec is capable of in an Arena environment.

Peeling is a bit harder to do as Hatred because a lot of the CC that could be used to relieve pressure will be broken by your DoTs. Because of this, I suggest using the Stun Grenades instead of the Seismic Grenades while playing this spec. The stun grenade CC duration is in fact shorter, but it will not break on damage. In conjunction with that, you can use your knockback root to peel for your teammates because your DoTs will not break the root applied from your knockback. 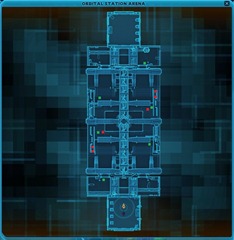 This map is one of the best for an Assassin player. Use the red marks for offensive Phase Walks, green for defensive. Try to initiate the fight by getting a stealth knockdown on as many enemies as possible. Force the fight up on the catwalk and use your knock back to force imbalanced fights for the enemy. If you set your PW up top and have focus fire on you, jump down. If the enemy chases you, PW back up and you have now forced a 3v4 in favor of your team. 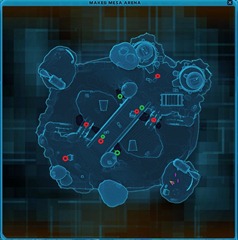 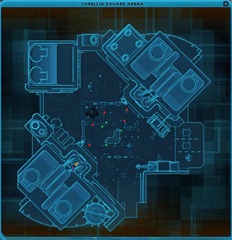 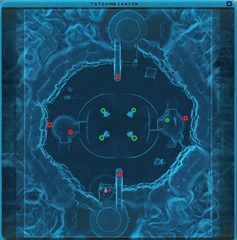 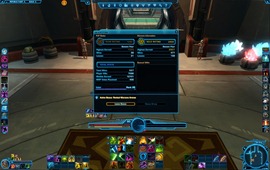