This guide discusses the abilities, strategies, utilities and gearing for mercenary healers in PvE content.

Mercenary Bodyguard might be the strongest single target burst healer in the game, but it also performs very well at AoE healing due to strong low-CD abilities.

Healing as a mercenary is both fun and challenging, since a mercenaries have a special heat system that makes its play-style unique. The most important part for mercenaries is to learn how to control the heat-level and since most boss fight have different mechanisms the optimal rotation might differ a lot from the standard rotation.

This section covers an outline of the important abilities for mercenary healers and discusses the strategies for the use of these.

In this section the important abilities for Mercenary Bodyguards are listed.

The rate at which heat is vented is dependent on the heat-level. The higher heat-level the slower resources are being regenerated. The regeneration tiers are with 0 alacrity:

A mercenary healer should try to stay in the fast region as often as possible to maximize the output.

These are the primary healing abilities

These are abilities that increases the survivability and mobility

This section discusses the strategies on how to best use the abilities in different situations.

Remember to apply Kolto Shell to as many people as possible before a fight and whenever there is a transition phase in the fight. This will help migrating a lot of damage from the boss.

Remember to build up 10 stacks of supercharge before the fight or in the transition. This will enable you to use Supercharged Gas or Supercharged Celerity when the fight starts.

Supercharged Gas is one of the core abilities in the mercenary rotation. The ability provides great burst healing potential or works as a rolling buff that should be kept up as often as possible:

Under normal circumstances, Supercharged Gas should be used whenever it is ready, but in some fights, it is better to hold it for a few seconds to be ready for a coming burst healing phase.

Note! It is possible to build stacks of supercharge while Supercharged Gas is active! This is good to know if you don’t need to use the full duration of to spam healing scan.

The Kolto Shell will provide a continuous, passive healing to the target when it takes damage and is therefore extremely helpful for the heat management. The Kolto Shell should be applied to as many targets as possible during a fight to lower the overall damage taken by the raid.

The Kolto Shell is extremely effective in fights with a lot of raid wide damage and in these fights; the mercenary healer should focus on blanketing the raid with Kolto Shell, whenever there are no more pressing matters to attend.

It might not always be possible to keep 100% uptime on all raid members during the entire fight, especially in 16man. In these cases, it is good to have a priority on who will benefit most from a Kolto Shell. The priority will be based on who takes the most damage during a fight and will in most cases look something like this:

It is important, not to reapply the Kolto Shell on a target unless the old one is depleted (or very near depleted), because if it is reapplied too often the full potential is not used and the heat-level will most likely go out of hand. The Kolto Shell should as a minimum be kept up on the tanks at all time.

Progressive Scan is one of the most useful abilities in the repertoire and should be used as often as possible. The primary reason for this is the armor buff that it applies to the four targets it heals over the channeled duration that increases the armor by 10%. Besides the armor buff the heal itself is very effective because it will always heal the targets with the lowest health.

Besides that Rapid Scan also builds 2 stacks of supercharge each time it is used.

Healing Scan is the strongest healing ability in the rotation. The primary function of the ability is to provide a +3% healing received buff to the target. This healing buff should as a minimum be kept up on the tanks at all time, but the buff should be applied to as many targets as possible during the fight.

Note! During Supercharged Gas, Healing Scan has no cooldown and can be cast on a lot of people in very short time, if you don’t need to spam heal the tank (Remember to watch your heat).

Emergency Scan is the primary burst heal, not only because it activates instantly, but also because it makes the next Healing Scan activate instantly. Besides the initial burst healing Emergency Scan also provides a HoT that heals for a fair amount.

Kolto Shot is used as a filler in the rotation whenever only a low to moderate amount of healing is needed. Kolto Shot will also help with heat-management since it will vent 1 heat (2, if critical) and build 1 stack of supercharge each time it is used. Therefore Kolto Shot is a very important ability and should be used whenever no bigger heals are needed.

Kolto Missile is the mercenary’s primary AoE heal. So if the fight has a lot or raid damage Kolto Missile should be used as often as possible. Kolto Missile is maybe the strongest AoE heal in the game at the moment due to the short cooldown and relatively high output. Note that Kolto Missile also can be cast on the run.

Progressive Scan is also very effective for raid healing, because it heals up to four targets over the channel duration.

Hint! Progressive scan can also be cast on the run if Thrill of the Hunt utility is selected.

Jet Boost can also be used as an AoE heal if Kolto Jets utility is selected. Jet Boost heals all allies around your current position for a moderate amount. Jet Boost is however a bad healing ability because:

If there are, burst healing phases in the fight make sure that Supercharged Gas is ready for this. The burst rotation is a execute top-down rotation.

Use Kolto Missile and Progressive Scan on cooldown!

On the official swtor forum Palydin have created a guide where he discusses the efficiency of each healing ability with respect to potential output (Healing/Second) and heat cost (Healing/Heat) vs the number of healing targets. The results of his calculations can be seen in the link below:

If you are interested in joining the discussion I refer to Palydin’s forum guide, where he also discusses the optimum DPS abilities for mercenary healers.

The entire system makes the build very customizable, so dependent on the fight and personal play styles the setup will differ a lot. Because of this, one build will not be optimal for all fights and for all players.

A general setup that will be useful in most encounters in the current content could be.http://dulfy.net/2014/10/13/swtor-disciplines-calculator-swtor_miner/?link=dGEAAABBAAAAGAYDBQ4QFxMA 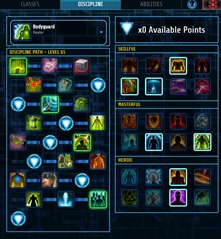 Mastery is the primary stat for all healing and DPS classes. Mastery increases the bonus healing added to all abilities and increases the critical chance by a small amount

Power is the secondary stat for all healing and DPS Classes.Power is important for healers, since it boosts the bonus healing/damage.

Alacrity rating is considered a tertiary stat. Alacrity increases the speed at which abilities are activated, by decreasing the activation time of the abilities, reducing cooldowns, and increasing the resource regeneration rate.

Generally critical will increase the size of the heals, while alacrity increases the number of heals time. A even split between the two on enhancements, earpiece and implants seems to give a decent output.

Augments: Mastery vs Power vs Critical vs Alacrity

Augments can have one of four possible stats that will directly increase the healing output. On augments the primary, secondary and tertiary stats compete directly with each other. The total stat budget is:

The initial tests seems to indicate that the tertiary stats (critical and alacrity) will increase the expected healing output more than mastery and power. If you have spilt evenly on the enhancements you can fine-tune the stats using the augments.

In the table below the optimum stat are summaries for the different endgame gear tiers.

The set bonuses are very important for mercenary healers, because they will greatly increase the healing output:

Set-bonuses are the first thing one should focus on getting. Set-bonuses are so important that a armoring with the bonus is better than an armoring two gear tiers higher that does not have the bonus.

Consumables are an important boost to the stats and can mean the difference between victory and defeat. A mercenary healer will want to be equipped with the following:

Datacrons provides a small permanent boost to the primary stats (mastery and endurance). The datacrons can also give you datashards, but these are of little use since the datacube is no longer BiS relic.

It is possible to unlock some legacy buffs that will give a permanent boost to your healing output, by completing all companion conversations and quests.

The companion legacy buffs are:

These buffs can only be achieved once per legacy, so you only have to complete the companion stories on one character. To see which companion unlocks which bonus look here: http://dulfy.net/2012/04/22/companion-gifts-and-crafting-bonuses-for-1-2/

The buffs relevant for the mercenary healer is increased critical chance, critical multiplier, healing received and HP. The accuracy buff is only relevant for DPS.

The user interface is a very important part for healers, since you can increase the healing done a lot, by just setting it up correctly. The optimal user interface differs from player to player, but I will try to cover the basics here.

First of all the normal group window should be changed the ops-window (can be done in preferences), since the character pictures are just a waste of space in the graphical interface.

The ops-window and the health bars inside it should be as large as possible, since healers have to focus mostly on the group’s health and not so much the battleground itself. By making the opswindow large also makes it, easier to spot debuffs on the friendly targets. It is also possible in the options for the ops-window to only display cleansable debuffs if one prefer that.

By increasing the maximum zoom in the preferences you can get a better view over the battlefield. This will help a lot when placing an AoE heal.

One thing should be done by all healers is to focus target the boss to easily see how much health the boss has left and to see what skills the boss is casting (interrupt if it´s possible and if there is time).

Assign hotkeys to the abilities that is most frequently used. This might be obvious to most people, but I have met several people that did not use hotkeys, and was surprised how much it helped them, when they started using them. Place the hotkeys close the movement buttons, so they are close at hand (I use the number just above the letters).

In the preferences, there are a set of options that can be extremely useful for healers. These options can be found under Preferences -> Controls -> Combat:

NeNiMel is main healer and officer in <Ragnarok> on The Red Eclipse. NeNiMel has played SWTOR since the beta and has primary played as a mercenary healer (Atmea). Since 2.0 he has maintained The Mercenary / Commando Healing Guide on the official swtor.com forum, where he with help from the community has collected knowledge about mercenary and commando healing.