Darkness Assassin is the Tanking Discipline for the Assassin advanced class. Out of the three Tanks available in PvP, Darkness has the highest single target burst as well as the most potential utility in a PvP environment. Your goal as Darkness will be to mitigate as much of your team’s incoming damage as possible and redirect it to yourself. Do you want to actively save your teammates while dealing out some pretty good damage as well? If so, Darkness is the Discipline for you.

Here is a picture of my stats while in my Tank gear. This is with an Advanced Anodyne Fortitude stim active. This gear is also a mixture of Exemplar and Cynosure gear, about half and half, so keep in mind that with full Exemplar gear your stats will be slightly higher. 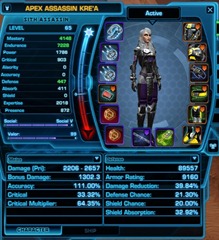 I want to preface this section by saying, the gearing specifications are the ones that I personally use in Solo Ranked, Group Ranked and Regular Warzones. I have found that this gear gives the best balance between damage mitigation as well as offensive damage output. The gearing stats that I have provided are obtained by using 7 Advanced Discipline Enhancement 40X, 9 Advanced Lethal Mod 40B-X, and 14 Advanced Fortitude Augment 40. The earpiece I use is Exemplar Bulwark Device and the implants in use are Exemplar Bulwark Package. I have chosen to use these implants and earpiece because they give more Endurance than DPS Implants/Earpieces do and they also help bump up your Tank stats just slightly to help with what little damage can be mitigated. DPS Relics help with your damage output, but they are also the only relics that have endurance on them naturally, as the Tanking relics give Mastery instead of Endurance.

I do not put any points into Shield rating because this Discipline has a skill that increases your shield chance by 18% and it has 100% uptime. I would rather use those points to gain more damage. The armorings should all be from the Survivor’s set bonus. The hilt should come from the Juggernaut/Guardian’s tank saber as this hilt has more endurance than the Assassin/Shadow sabers. With 4.0, came an interesting change to Tank PvP sets. There are no longer “High Endurance” versions of the armoring, they are all Versatile Armorings. This means that in order to gain the most endurance possible, it must be done completely through the use of Mods, Enhancements (Includes Implant/Ear), and augments.

Here is a screenshot of this gear set up (DPS tank gear) in a ranked environment pre in patch 3.3, just before 4.0 was released. Notice that I’m still able to perform my job, generating as much protection as possible, while also doing good damage. 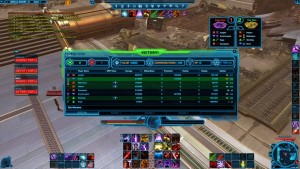 Explanation: Electric bindings is a great peeling tool for the Tanking Discipline. Mental Defense is a good utility to take to reduce damage taken while stunned, since you will be running high endurance DPS gear with very little mitigation. This will help you when you are being Tank tunneled.

Explanation: Emersion is a must have, there is nothing that will be more valuable in this tier of utilities than this one. This will not only break any and all roots/slows but also prevent you from being rooted/slowed for the duration of Force Speed. I take Audacity now because with the set of gear you will be running with, you will want all the DPS you can get as well as the cooldown reduction on your knockback, it will give you great peeling ability as well as a DPS upgrade.

Explanation: The most beneficial utility in this tier is Haunted Dreams. It allows you to set up a lot of great plays, especially when used in conjunction with Phase Walk, Phantom Stride and Force Pull. Having Whirlwind as an instant cast is core to the utility of the Darkness Discipline and you are only gimping your utility as a Tank without it. Phasing Phantasm has replaced Shroud of Madness for two reasons. The first reason is because the 4.0 Meta is that of a mobility arms race. With the addition to many gap opening abilities as well as rotational slows/snares, it is very useful to have an additional root break. The second reason is because as Darkness, your Force Shroud has a lower cooldown than the other two Assassin Disciplines due to a passive in your Discipline tree. Because of this, you are less reliant on having an additional Force Shroud attached to your Force Cloak.

First and foremost, the most important aspect to successfully Tanking in PvP is to perfect your Guard Swaps and peeling. Keeping your team alive always comes first, doing damage is always secondary to that. Second, with majority of your GCDs being spent on peeling abilities or guard swaps, there is little room for an ‘actual’ structured rotation. With that being said, here is a generic Tank rotation to generate the most DPS and procs as possible in the shortest time frame:

Start from stealth to build 4 stacks of Dark Protection.

This is a very basic rotation. In practice, your actual rotation will vary depending on what procs you get. For example, sometimes you will reset your Shock by getting an Energize proc after using Thrash/Lacerate. In this case, you will want to use Shock and then go straight into Depredating Volts, pushing your Maul back since it has a long internal cooldown before you can proc Conspirator’s Cloak again (10 second internal cooldown). If you can, try to only use Discharge when it is proc’d and does 75% more damage or if you need to reapply the ‘Unsteady’ debuff to an enemy, otherwise, always use Lacerate in its place, as it puts up a very valuable Trauma debuff on the enemy. Only ever use Maul when it is buffed with Conspirator’s Cloak, as spamming it otherwise will starve you of Force. Darkness is a spec that really lacks a structured rotation and is all about procs. When you consider the fact that a large majority of your GCDs will be spent swapping guard or peeling, your rotation becomes even less important.

Guard Swapping – Guard swapping is the most important aspect of Tanking in a PvP environment. Use all of your tools available to you in order to swap guard efficiently and effectively.

Acquire Target’s Target Keybind – This keybind is good to immediately pick up the target of whoever you have targeted. For example, I target an enemy Marauder. I see his target switch from myself to my teammate. I press the hotkey to acquire his target and immediately swap guard. Now all of the burst that the enemy throws onto that target will be mitigated by 50%.

Acquire Focus Target’s Target – As explained above, this is used to pick up the target of your Focus target, allowing for easy guard swaps.

Focus target Modifier: This is used to use abilities on your focus target, without ever targeting that player. Here is a guide on how to set up and use Focus Target Modifier.

Darkness is known for its wide array of utility and potential combos that can be pulled off to secure a kill. Here are a few:

1) Drop Phase walk into the group > Force Speed away from the fight > Force Pull the enemy Tank> Whirlwind the Tank> Phase Walk back to the fight.

2) Electrocute your target > Drop phase walk and Phantom Stride to a group of enemies on one of your team mates > Throw a grenade > Phase Walk back to original target.

3) Run off the edge of tier 2 of a map (Makeb Arena Bridge, Orbital Catwalk) > Force Pull enemy Tank> Whirlwind them > Either Phase Walk back to Tier 2 or Phantom Stride back to an enemy on tier 2.

4) Overload a Tank to root them > Force Pull an enemy DPS or Healer away from the Tank> Burst them down.

These are just a few of the combos that can be pulled off as Darkness Tank. I will upload video demonstrations of how to do these combos later. 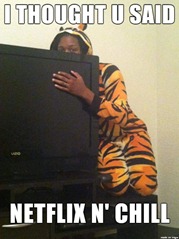