Hello I’m Thrax/Thraxara/Agent_Thrax and I’ve been playing SWTOR at a Nightmare progression level for about 2 years now as a Sniper. I have had the privilage of raiding with some of the best players to ever grace this game and hope my experience and expetise can help you become the the best you can! I’ve raided with such guilds as Drop It Like it’s Hoth, Phantøms, Ufrog, Reckoning, Titans and Zorz at a Nightmare level. As of 5/11/2015 I have cleared all 4.0 Content with Phantøm’s playing all Sniper specs and keeping up with those Broken PT’s and hopefully you will too after reading this. I sometimes stream our raids on twitch if anyone’s interested, Can expect dank tunes and Nightmare bosses www.twitch.tv/agent_thrax🙂

With the release of 4.0 Bioware have finally vastly improved and reworked the Saboteur Spec to make it, to be blunt viable. I know many people didn’t bother to learn it in 3.0 including myself because Marksman and 3 Cull Virulence were so strong it made the spec pointless and the boss encounters leaned away for the spec and more towards the others anyway. With the resurrection of the old operations in conjunction with the reworking of the spec it’s now viable and if played correctly optimal on most bosses. In this guide I will aim to give you short, efficient advice on how to play Saboteur Gunslinger. This guide will be oriented towards PvE.

4.0 Saboteur is “Single Target AoE” damage which in it’s self is a weird term and makes actually playing it fun and enjoyable but still gives you a challenge to make you stop and think rather than going on auto pilot. At the moment Saboteur is the highest parsing spec on the Parsely (http://parsely.io/parser/leaderboard) Leaderboards and to be honest it should be because it’s a hard spec to play in an actual raiding environment with movement because Plasma Probe/Incendiary Grenade being a grounded ability it gives it depth.

To quote the 3.0 Virulence guide writen by Yolo/Snickerr “To live a Gunslinger must remain in cover. We have a wide variety of defensive cooldowns to work with such as Shield Probe, Evasion, Covered Escape, Entrench, & Diversion. Shield Probe is used to mitigate moderate damage while Evasion (while in cover) would mitigate massive spikes. One of my favorite things about this class is being able to use Covered Escape at the perfect second to mitigate a high damaging ability 100% (think NiM Dread Guards).” Thanks to 4.0 we have all this TIMES TWO!! Imperial Preparation/Bag of Tricks! Resets the active cooldown on Evasion/Dodge, Countermeasures/Surrender, Shield Probe/Defense Screen, Cover Pulse/Pulse Detonator, Entrench/Hunker Down, and Covered Escape/Hightail It. This ability has a base cooldown of 3 minutes and is off of the Global Cooldown. This makes Gunslingers basically gods, I’ll talk more about this down below.

Gunslingers have always had a reserved spot in most raid groups and with the revival of the “Old Content” this holds true once again with 4.0. The combination of high damage and utilities like Diversion, Covered Escape and especially Ballistic Shield, Gunslingers are the best ranged DPS to take in most raid encounters (Everyone else re rolled to AP PT anyway it seems #Kappa). Saboteur though relies unlike Marksmanship and Virulence on a somewhat static target which limits where this spec can be played but get creative! Throughout my raiding time I’ve played “less than optimal” specs. To give an example Marksman on Tyrans Nightmare 90% of people went Lethality but I chose Marksman because I could make it work and managed to do sick DPS with it after experimenting.

The Saboteur rotation is not hard at all! It’s just implementation into certain fights which at times can get tricky and not destroying your energy in the process. I will explain this more at the rotation section down below.

Here is a list of all the Saboteur changes from the 4.0 update if you haven’t already read the patch notes.

There is 2 Common Builds you can use. In my personal opinion 99.95% is more DPS but you can remove a Crit/Alacrity piece and add 1 more Accuracy enhancement and take out 2-3 Augments to be at 100% if you prefer it. The new rotation for Saboteur with 4.0 is a lot of fun and rewarding when executed correctly. The rotation is pretty simple and nothing too fancy, Just a set rotation and making sure you use the right priority on 2 gcd’s when energy or the situation calls for it. There is only really 2 parts to this rotation; The Opener and and the default rotation.

But there are a couple of things to keep in mind.

For maximum dps use this as an opener. Not much to say on this just follow this and you will be golden. I would agro/threat drop on Adrenal to give tanks a fighting chance 🙂

Once you have completed the opener you now move on to this rotation that doesn’t change until <30% which at that point Quickdraw replaces Vital Shot only if the target still has the Marked Target debuff, marked targets take 5% more damage from ranged attacks Vital Shot applies the debuff for 45s. I would only roll on a target for a parse 99% of the time in actual Operations Basic Attack is more viable and A LOT more safe. I would use energy cooldowns such as Cool Head at 40-50/60-50, Illegal Mods on GCD 9 and10 aka the Flyby and Vital Shot gcd’s to try to squeeze more DPS if you are using the max DPS rotation or saving things for a burst DPS phase.

Continuing from the Opener

Just the same rotation as above but you start on the 5th picture/gcd it’s super simple.

At points in the rotation you will have high energy or if you are entering a burn phase on a boss encounter and need maximum DPS, I would 100% encourage you to replace basic attacks and roll with:

A.) XS Freighter > Vital Shot if they aren’t already on the target (debuff included)or on cooldown.

B.) Quickdraw > Vital Shot if the target has the “Marked Target” debuff.

Of course, you’re going to want to use your high energy abilities when you have illegal mods and Cool Head up, but be conservative when they are on CD as it can be very tricky to not burn through your energy, again try not to push too hard until energy cooldowns re available. 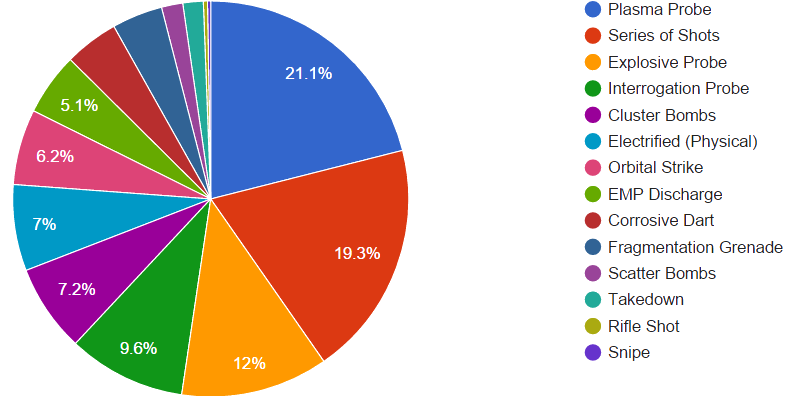 Here you can get a general idea of what your highest damaging abilities will be on a stationary target over 1.5million HP and decent crit. (Don’t have a Republic Version of this yet soon tm*)

Playing Saboteur in a Raid Environment

As a general rule only play Saboteur on either; A.) A 65% Static target or B.) An AoE Intensive fight. This yields the greatest DPS. I would encourage you to experiment with what bosses this spec can be played on, with planning, knowledge and communication it can be a great spec to play on 70% of boss fights.

Talk to the raid leader/tanks about when and where the boss/adds will be for maximum DPS it’s essential to always precast when ever you can and a greater under standing of the fight as a whole is always nice to have.

Also don’t be afraid to save abilities such as Flyby for say a mechanic that releases adds in like 20s such as Draxxus or Grob’Thok as it will yield more dps and we all love DPS!

This is a general Slinger rule but use your Raid Shield as much as you can as it’s free damage reduction to EVERYONE. Obviously there is some phases where you need to save it for example final burn on Brontes Nightmare but on this fight you can use it to reduce damage on the raid (This helps the healers heal the tank more as he gets rekt) at the 100-50 Kephass phase.

Here you can see me playing Engineering/Saboteur on Firebrand and Stormcaller Nightmare. Things you might notice about what I do;

Pre-cast Flyby as much as possible, always do this when you can more DPS!,

Modify the rotation slightly by using Flyby before Incendiary Grenade to have all the orbital ticks be able to hit the Tank before the “Defensive Systems” cast ends,

I use Charged Burst and other low prioirty abilities on the adds in the shield to save my high damaging abilities for the Tanks to help beat the DPS check. A good rule for all DPS is you might not be top on the meters like I was because I couldn’t execute my rotation on the adds but I save my damage for the ACTUAL target that needs to die. I would call it “eDPS”, Effective Damage Per Second”.

(For the record I still could of had higher DPS, there is always room for improvement!)

Would like to thank all “my m9s and m10s” that I’ve had the pleasure to talk and to play with over the last 2 years via Twitch and Ingame Phantøms, Zorz, Severity, Death and Taxes,Hates You, Drop it Like It’s Hoth <3, RIP, NGE, and Failure,

Special Thanks to Yolo/Snickerr and Shulk who had some of the ability names and descriptions already written out.