Vengeance Juggernauts are the most durable damage dealers in the Star Wars Universe. Their offence favors close range combat (4 m) and is geared towards burning away an enemy’s health bit by bit with a combination of lightsaber and force abilities. This specialization excels in large battles and with clever positioning and crowd controlling abilities the best Juggernauts will literally Slam their way to top damage.

If you enjoy leaping into the thick of things and dealing massive AoE damage, this is the class for you. Read on if you wish to take yourself to the next level

The Knights of the Fallen Empire expansion (4.0) introduced a huge change to the stats by rolling surge rating into critical rating and changing the formulae drastically, making critical chances of over 35% easily attainable. This change has greatly increased the value of this stat to the point that it is viable to stack crit over power (the mastery/strength stat is no longer viable for augments).

In the previous expansion, The Shadow of Revan (3.0), alacrity became another great stat to add to your gear as it decreases the GCD (global cooldown) and CD of many of your abilities. I had much success in stacking this stat. However, it becomes fairly useless if you ping is high, or your APM (actions per minute) is low.

As a result of all of this the way I have chosen to gear is to:

The Discipline System is a designed path for each class which grants you key abilities for that discipline, there are 3 disciplines to choose from for each Advanced Class – This guide is for Vengeance Juggernauts.

The Utilities System gives a player an opportunity to customize their character based on their playstyle. The Utility Tree is divided into three Tiers: Skillful, Masterful and Heroic. Tier one, Skillful, you need to spend a minimum of 3 points in order to open Tier 2, Masterful. From Tier 2, you need to spend 2 points in order to unlock Tier 3, Heroic, where you can then spend the final 2 points for a total of 7 Utility points. Now, you can spend all 7 points as you see fit. Meaning you can spend all 7 in the first 2 tiers or spend them evenly across all three Tiers. It comes down to what Utilities are needed to be competitive in your gaming environment.

For PvP there is a lot less wiggle room for utilities. The way I see it, as a dps your primary focus should be on talents that increase your own dps, whether by keeping yourself alive or by a flat damage increase. If you can manage to fit other things in great, but DPS should be your primary concern. The Knights of the Fallen Empire (Patch 4.0) added some new utilities and modified others.

The following are the Utilities that I recommend in a PvP environment. Due to the amount of crowd control in the game, these utilities are geared towards increasing your mobility – the lack of which was the downfall of the class in the previous expansion. 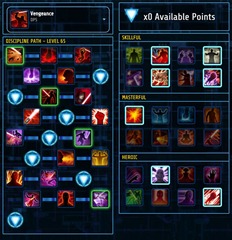 Note: There may be a slight bit of wiggle room, and while I strongly suggest this build, I think it is important for everyone to experiment with different utilities and come to your own conclusions.

What you need to know beforehand

Before we begin to learn the rotation of the Vengeance rotation itself, you first have to commit to memory the various “Procs” that generate various outcomes and abilities in Vengeance.

Smash and Vengeful Slam spread your bleed effects to all targets they damage, if at least one of the targets is already affected by your bleeds.

Shatter finishes the active cooldown on Ravage and generates 3 rage.

Shatter impale, Civious Throw and Venegeful Slam increase the critical chance of your next Force Scream by 50 %. Stacks up to 2 times and lasts 15 seconds.

Ravage and bleed effects both have a 30% chance to grant Destroyer. Destroyer finishes the cooldown on Vicious Throw and makes it cost no rage and usable on a target with any health level. Can only occur once every 20s.

Note: Alacrity will affect the cooldowns of these abilities.

Does high force elemental damage on initial application with a 12 second Elemental Damage Over Time Effect that deals high Damage. This Damage over Time effect can be spread by Bloodbath! Generates one stack of Savagery and resets the cooldown on Ravage. Each tick of the Damage over Time effect has a 30 percent to generate Destroyer.

Ravage: Is the Traditional cornerstone of the Vengeance Juggernaut and deals a significant portion of your single target damage. Plasma Brand resets the cooldown on Blade Dance.

Vengeful Slam: It is your primary AOE and secondary filler. Vengeful Slam can be used to spread your Damage over Time effects to multiple targets.

Sundering Assault Your primary filler. It’s a core rotational ability in the fact that it’s the quickest method for generating Focus you have in a single GCD. In addition, if you have your 2 pc set bonus, every 30 seconds, it generates a 15 second buff that increases all damage you deal by 2%!

Enrage Instant ability off the GCD. Generates 6 focus. Should be used only when Sundering Assault is on Cooldown and you NEED focus.

Force Charge Closes the gap between you and your target instantly, cannot be used if character is under cover. Grants Unstoppable and Brawn.

Saber Throw It is a very effective filler, and applies an armor debuff.

Force Choke Does low damage over 4 seconds and stuns the target.

Force Push Pushes the target away several meters and knocks the target down for 2 seconds. Deals moderate damage.

As a damage dealer, your primary objective is to kill as many enemies as you can. While this spec deals decent single target damage, Vengeance excels at applying group pressure and this guide is geared around the idea of “DoT Spreading” through Vengeful Slam. While there is not set rotation due to the dynamics of PvP here are a few notes on ability priority for PvP.

Here are some common openers depending on the situation. You should default back to either of these if those abilities are all off CD.

This is going to be our primary opener, remember this. That said there are a couple modifications that we can make to maximize our uptime/burst:

1) Ravage should always be used ahead of Vicious Throw provided you are in range and the target does not have a white-bar.

2) Vengeful Slam can shift upwards in the opener depending on if targets are moving. Remember, the goal is group pressure and spreading without all 3 dots is preferable to spreading to less targets as Shatter does significantly more DoT damage than the other two, and Vengeful Slam also hits for a decent amount itself.

3) In 4.0 the 6-piece gear bonus (the auto-crit on Impale) proc has changed from Saber Throw to Force Scream. As a result, in order to get the auto-crit in your opener you will have to swap the positions of Impale and Force Scream.

4) You can substitute Sundering Assault with Enrage if Enrage is on CD or you want to hold your root-break / speed buff.

5) Due to the Focused Freedom utility Enrage in Vigilance should not be used mid leap. Ideally you will wait until you need the focus to use it to have a greater uptime on your speed increase.

This opener is for single target control and is designed to get a full Ravage in an Unstoppable + Brawn window with zero chance of it getting stunned or knockbacked (if you have the recommended alacrity). While Ravage has lost much of it’s damage, forcing your target to use a root break early on can be very useful. I rarely open in this manner. The same notes for the multitarget rotation apply here as well.

This is the single most important part of any Juggernaut’s utility when it comes to PvP. As the saying goes, you do zero DPS if you’re dead. In general, you will have to learn when you need to use a CD or when to save it for a better time. In regs feel free to be a bit more liberal; in ranked you have to be a bit more certain. That being said, it is always better to pop your defensive cooldowns earlier rather than later. I never ever want to see a Juggernaut dead with DCDs available!

The Juggernaut has some great utilities to help teammates stay alive, and make opponents very annoyed.

Taunt: A must, it takes nothing for you to cycle your taunts off CD and it really helps to keep your teammates alive – make sure you are not taunting the enemy that is focusing you, you will lose it effectiveness.

Intercede: The damage reduction on teammates is huge, and can mitigate a lot of burst if timed correctly.

Stance Dancing (Soresu/Shien): This is one of the more difficult concepts to master, for if done poorly it can be disastrous for your team. Here are a few pointers in order to use this concept effectively in both regs and arenas.

Intimidating Roar: In venge/vigi this ability is a bit annoying to use, because your dots will likely break it the second you use it. That said, it is not a bad idea to use it before you start putting any damage out, or to interrupt critical heals/damage from the other team.

Force Push: Whether it is a healer or dps, if you see a chance pushing an enemy out of los is generally a good idea so long as your teammates aren’t on them. This is especially useful to push a tank or a healer out of guard range which presents an opportunity for a kill. Other fun things you can do with this ability include pushing people into acid and fire pits. You will eventually get used to the range that you targets are pushed, and from there you just need to make an imaginary straight line of you, your target, and whichever pit. GG.

Zetsuma, of Jedi Covenant from the guild Lethal Dose Fifty, has played a Guardian since launch and has made the top 10 Juggernauts in Seasons 4 and 5. In season 6 he took a break from Jugg and got both his Sorc Healer and Carnage Marauder to Tier 1, the highest on the server for both Advanced Classes. Season 6 also saw him get Tier 2 for all other ACs (excluding Jugg – which was not played). Going into Season 7, with the increased mobility of the class, he is ready to continue the Jugg life.

Rydarus, AKA “Alácrity.” is one of the more outspoken proponents of alacrity as a stat in 3.0, and 4.0 has only solidified his obsession with the stat. He’s perfected and tinkered his approach to Vig/Veng under the principles of DoT uptime, and hopes to spread the “proper” way to run Vigilance/Vengeance to other players.

I’d like to give special thanks to a couple other people who helped with this guide.

First Vesev, who really helped get my first guide written and formatted. Without him this guide would not be here.

Special shout out to fellow Lethal Dose Fifty Jugg, Gilgamesh, with whom all things Jugg have been discussed through and through.