Hello I’m Thrax/Thraxara/Agent_Thrax and I’ve been playing SWTOR at a Nightmare progression level for about 2 years now as a Sniper. I have had the privilege of raiding with some of the best players to ever grace this game and hope my experience and expertise can help you become the best you can! I’ve raided with such guilds as Drop It Like it’s Hoth, Phantøms, Reckoning, Ufrog and Zorz at a Nightmare level. As of 5/11/2015 I have cleared all 4.0 Content with <Phantøms> playing all Sniper specs and keeping up with those Broken PT’s and hopefully you will too after reading this. I sometimes stream our raids on twitch if anyone’s interested, Can expect dank tunes and Nightmare bosses www.twitch.tv/agent_thrax 🙂

With the release of 4.0 Virulence is to be honest overshadowed by the other 2 specs, which is a shame because this spec is fun but the revival of Engineering was the best overall move in my opinion after a solid 1 -2 tiers of the same rotation with Virulence it was a welcomed change. Don’t get me wrong this spec is still powerful on a few select fights! This guide will be oriented towards PvE.

4.0 Virulence is a Multi Target Damage over Time (DoT) Spec that revolves around throwing 2 DoT’s at a target and then using Cull. In 4.0 it’s 95% the same rotation from 3.0, the only difference being you need to filler more because Snipers lost the old set bonus that reduced the cost of Takedown (It might actually still be worth but I don’t play enough atm to test this if someone can do this comment below or contact me I will confirm or deny this). Even though you won’t be playing this spec much it still does solid damage. *I’m only going to list the “3 Cull rotation” at the rotation section because there is not point listing a sub optimal rotation. If you want to for whatever reason view it you can check it out in the Dulfy 3.0 Guide written by Snickerr/Yolo*

Snipers have always had a reserved spot in most raid groups and with the revival of the “Old Content” this holds true once again with 4.0. The combination of high damage and utilities like Diversion, Covered Escape and especially Ballistic Shield, Snipers are the best ranged DPS to take in most raid encounters (Everyone else re rolled to AP PT anyway it seems #Kappa). Virulence in 4.0 is HEAVILY overshadowed by Engineering and Marksmanship and is only played on maybe a total of 3-4 fights out of all of them.

The 3 Cull Virulence rotation revolves around Culling 3 times before refreshing your DoT’s. This rotation relies heavily on Cull RNG (When DoT’s Crit during Cull you regen 2 energy back meaning you don’t need to filler and can Takedown and Lethal Shot more) and not messing up fillers or else your energy is basically destroyed. This spec is probably the hardest Sniper spec to play and to be honest for the output it gives and the fact Engineering/Marksmanship is better on 90% of encounters I would say it’s now the worst Sniper Spec out of the Three.

Here is a list of all the Virulence changes from the 4.0 update if you haven’t already read the patch notes.

There is 2 Common Builds you can use. Virulence in 4.0 is similar to its 3.0 rotation apart from you NEED to filler more because of the new 6 piece set bonus.

But there are a couple of things to keep in mind;

Corrosive Dart and Grenade, Cull and Weakening Blast should be used on cooldown, priority permitting of course.

After Cull there are 3 sets of rotations you will do (In this order);

Filler Priority is as follows (Top being highest priority bottom being lowest):

For maximum dps use this as an opener. Not much to say on this just follow this and you will be golden. I would agro/threat drop on Adrenal to give tanks a fighting chance 🙂

After Cull there are 3 sets of rotations you will do (In this order);

Filler Priority is from top to bottom (Top being highest priority bottom being lowest):

I would use energy cooldowns such as Adrenaline Probe 40-50/60-50, Target Acquired on the filler gcd’s to try to squeeze more DPS if you are using the max DPS rotation or saving things for a burst DPS phase. Don’t be afraid to Filler a few more if you mess up your energy. 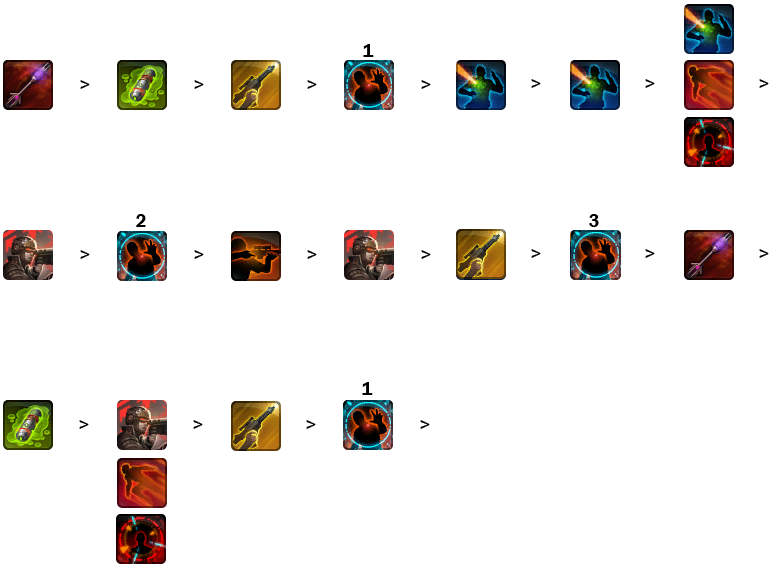 As a last note, Weakening Blast will move about in the rotation ALWAYS use it before you Cull, For rotation 3 you won’t have it sometimes just Cull anyway because you don’t have 100% Cull up time sadly on Weakening Blast if they wanted to buff the spec this is one way to increase DPS for make the duration longer and the cooldown shorter. This looks like this.

(Thanks to Mortini for mentioning this :p)

DoT Spreading/Multidotting does great damage so use it as much as you can. You can use this rotation to keep 2 sets of DoT’s up at the same time, Great for fights such as Sword Squadron, Master and Blaster, Coritanni and Dread Council. 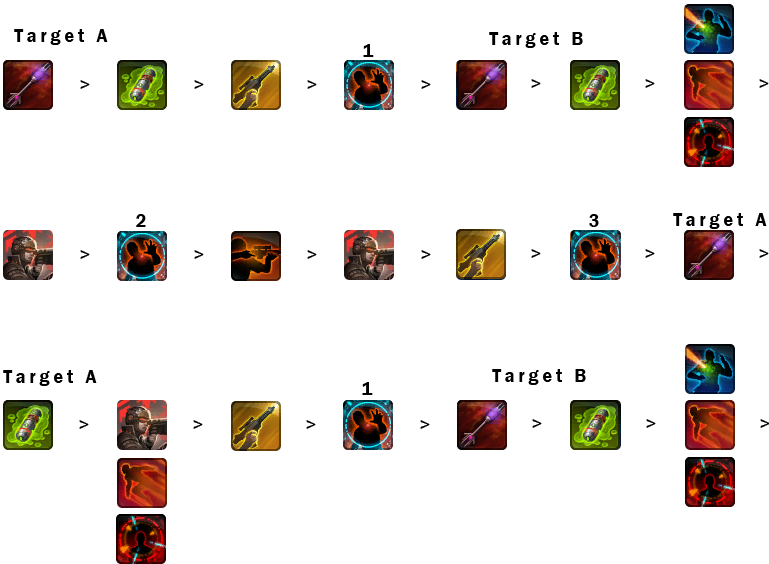 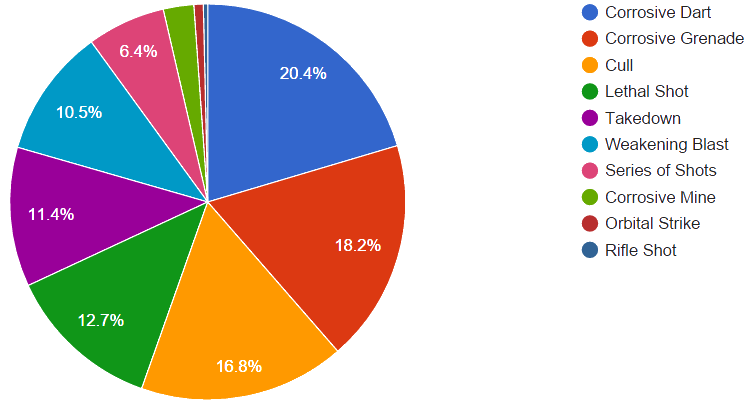 Playing Virulence in a Raiding Environment

Virulence in 4.0 should only be played on fights where Engineering and Marksmanship is not viable. This is only on a few fights but on these fights this spec is still strong.

Talk to the raid leader/tanks about when and where the boss/adds will be for maximum DPS it’s essential to always precast whenever you can and a greater understanding of the fight as a whole is always nice to have.

DoT Spreading/Multidotting does great damage so use it as much as you can!

Here you can see me playing Virulence on Dread Council Nightmare. Things you might notice about what I do;

Pre-cast Orbital as much as possible, always do this when you can more DPS!,

Multidot on Multiple targets (I had a bad hangover and was still a bit rekt when we killed this so my rotation is actually cancer, Don’t do drugs kids),

Save my offensive cooldowns for the phases that matter since I already know we are going to make it past the first phase so I save Laze Target, Target Acquired and Adrenal for Styrak/Brontes burn phase and final <15% to 0% end burn phase.

On the Styrak/Brontes burn phase you can hit both targets if you target Brontes with Corrosive Dart then Corrosive Grenade because Styrak’s Dragon has a tiny hitbox you can use Brontes instead to spread your DoT’s. Just make sure the tanks move Styrak/Dragon on top of her ASAP once she teleports.

Just remember to save raid shield and offensive cooldowns for final burn to maximize your potential damage dealing and damage reduction.