Focus Guardian is your alternative DPS discipline versus Vigilance. The differences are in both the playstyle and damage out put. Unlike Vigilance, Focus doesn’t have DoT’s (except Exhaustion) and is more mobile, especially with the utility selections.

Focus is considered a burst spec but isn’t as bursty as once before and in comparison to say Infiltration or Combat but it has its strengths. Regardless, Focus gives the option of swapping between an AOE and single target rotation for situational DPS increases.

Below are the utilities you’ll want to take. These utilities will increase DPS as well as some quality of life for your rotation and capability in a fight. You can realistically take what you like, but there are ones I consider mandatory, which I will outline below.

With the large amount of changes to stats such as Mastery, Critical Rating and so on. Gearing is a bit more open than it used to be, how ever I will outline what I deem is a decent stat allocation. This will change with gear tiers and stat budget so I’ll try and make this universal.

What You need to Know

Focus revolves around buffing yourself passively in rotation to allow for a massive hit at the end of each ‘cycle’. These cycles remain the same until certain situations like execute or AOE where some abilities will be shifted or neglected. 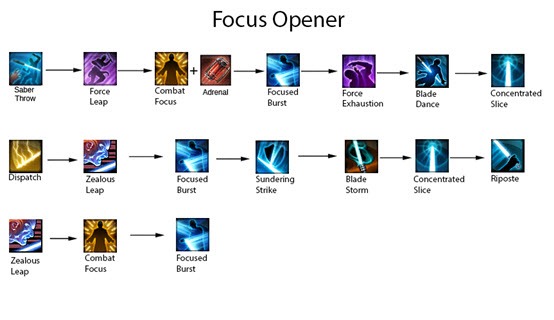 Saber Throw will grant some additional Focus on top of a decent hit before you gap close with Force Leap. Combat Focus will build your buffs and more focus to begin your next cycle with while its buff to generate Focus over time will persist also. Dispatch will be used instead of Riposte due to Ardent Advocate, bringing some added damage into your rotation. Any time you Force Leap, always substitute Dispatch for the next Riposte. Ardent Advocate lasts 15 seconds, plenty of time to reach the next Riposte or the one after if you mess up. 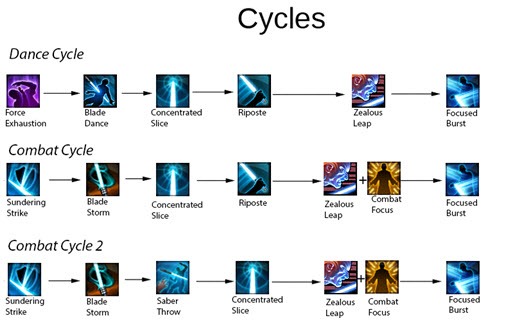 As I mentioned before, Focus has cycles and each one moves into one another. They carry Focus or lack of Focus into one another. You need to Alternate between Dance Cycle and Combat Cycle or Combat Cycle 2 depending on how much Focus you have. As I mentioned, Saber Throw is needed to keep rotation Stability and Combat Cycle 2 is needed so you don’t need to resort to basic attack. Due to Saber Throw now being 0m on default, this rotation have now be used sans any set bonus.

Knowing when to use Combat Cycle 2 is rather easy. When your Dance Cycle ends, if the amount of Focus you have is two or lower, then you need to substitute in Saber Throw as an impending Zealous Leap will eventually fail, leaving you without any means of using it. This process can be delayed in fights due to Visionary and Narrowed Focus granting you Focus back for taking damage. But always keep this in mind as it may catch you off guard if you rely too heavily on damage intake for rotation stability. 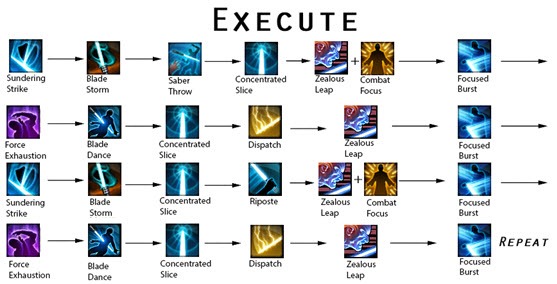 With the large amount of Focus from your Combat Cycle 2 bleeding into your next cycles, this opens up room to allow Dispatch. This means Saber Throw will be used more frequently for a potentially massive gain of damage, as such it balances out. The rotation simply replaces Riposte for Dispatch and every 2nd Combat cycle is Combat Cycle 2, meaning Saber Throw is used (practically on cooldown). This helps not burn you out for the increase in rotational cost.

In 3.0, a few players voiced concern on the placement of Sundering Strike and the use of Force Exhaustion with Blade Dance. With the help of Rydarus (Author of Vengeance guide), we found a rotation that flips ability placement around to remove Sundering Strike from the Heightened Power Window. This rotation isn’t as easy on the eyes as the other and doesn’t flow as nicely but it still works and secures more damaging abilities inside the window. 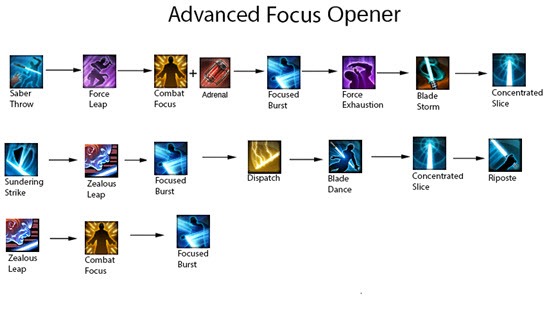 Here is the advanced opener. As you can see it’s a bit less clear in regards to a pattern of combination of abilities but follows the same rules. 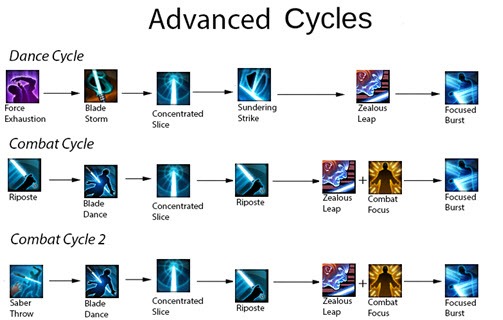 As you can see, Sundering Assault has been pushed to the end of the Ravage Cycle meaning its outside the Heightened Power window. On top of this, the placement of Blade Storm also procs the 6-piece Set Bonus, allowing your first Concentrated Slice to crit versus the second with the more simple rotation.

Lastly, in the Combat Cycle 2, you will ignore the first Riposite in favor of Saber Throw for the reasons outlined above to stop the rotation burning itself out. 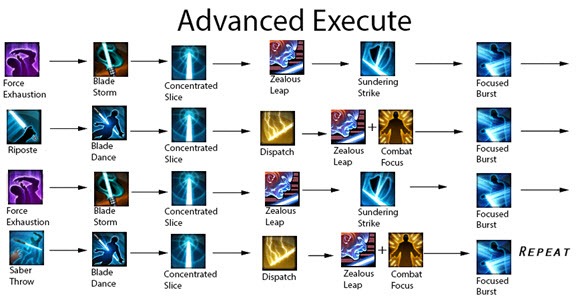 And finally, here is your execute. 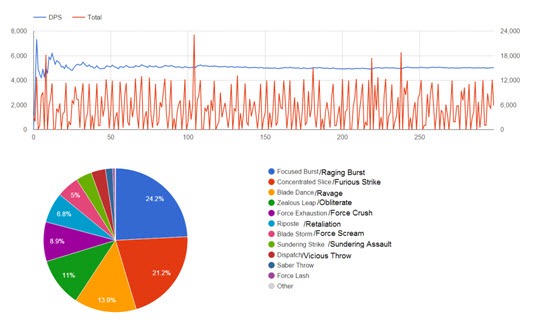 Above is a sample parse damage distribution. Regardless of gear levels you should see this graph be roughly the same. This parse is about a 5.1k in 192’s with new augments (my focus has been on my tank set).

Firstly, you’ll notice Focused Burst is the highest contributor to your damage, dealing about a quarter of the total damage dealt. How ever in a fight, this number may be lower due to uses of Sweep or delays on the use of this ability.

Coming in second is Concentrated Slice. Due to the high base damage and even higher crit damage, it will pull a head over Blade Dance as it has less shut down possibility on top of being instant.

Blade Dance most of the time is a decent filler, as you can see, its damage gap between Concentrated Slice is much higher than Zealous Leap. Blade Dance can and will do high amounts of damage but it’s barely an ability that will push past Zealous Leap.

Zealous Leap, even though a minor gap closer does deal good damage, even when it crits. It deals higher base damage than Blade Storm but does cost Focus, though since the rotation is built to ensure it’s always usable, it’s used pretty much on cooldown.

Blade Storm is very suseptible to crits for its contribution. A great ability due to the fact it grants Focus but as a damage contributing ability, its contribution is sort of RNG plagued, arguably this case could be made for any ability but the contribution deviation on my parses of Blade Storms seems to be one of the highest.

Sundering Strike merely out contributes other abilities due to flat usage. The abilities that fall below it merely are not used enough to push past its total damage.

Dispatch, depending on scenarios in fights may be used a lot more than a parse due to Ardent Advocate. Right now it’s used once outside the execute and frequently within. Don’t expect it to be a big player in the end result of your parse.

What to Check For