My name is KueDaddySausage/DeluxeTryHard. I play on The Harbinger or where ever there are Team/Solo ranked pops. I play a multitude of classes such as, Assassin, Sniper, EasyTech… I mean PowerTech, Sorc, and Operative. As for right now in the RANKED PvP scene, the best classes to choose would be Sniper and Powertech. For Regs, you can get away with just about anything. I have played since the launch of Swtor taking some major breaks in between, I love to PvP and will probably get into raiding (Don’t hold me to that) and stream. (You can catch me here at Twitch.tv/deluxetryhard)

As a sniper with high damage comes some squishy draw backs. A sniper should always be in cover, no matter what. When you’re in cover you are uninterruptable and when you have entrench activated you cannot be stunned. The thing with sniper DCDs are that you need to know the best time to use them. As a sniper one thing you will need to master is positioning which I will go over in a detailed explanation later in the guide.

The rotation for a marksman sniper is not difficult as long as you pay attention. The rotation is set in stone regardless of what situation you run into, unless you run into 5 people clumped therefore the rotation is – Suppressive Fire spam until you cry because you’re out of energy.

The only reason that I did not rank it 10/10 is because snipers damage is all channeled aside from execute and followthrough. Therefore you have the chance to being Line of Sighted by an enemy player. So positioning is everything for this spec. But other than that, the DPS output of this class is second only to the Powertech and sometimes not even then. Your damage is very intense: Ambush (21-25k), Snipe (9-10k), Penetrating Blasts (4k a tick), Execute (10-13k), and Followthrough (9-11k).

A) This is my standard Team Ranked Utility Set 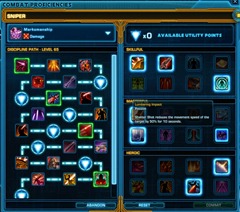 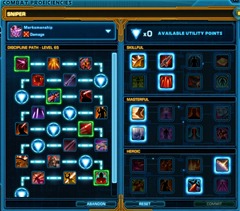 C) This utility set is if you are trying to tunnel one target only, and they are kiting a lot. 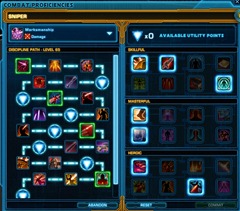 D) This utility set is good if again they are running two melee dps and clump a lot, the diversion slow is incredibly annoying. 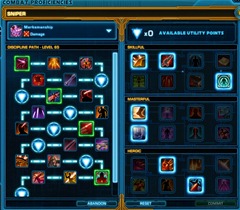 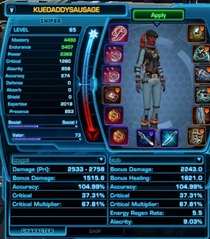 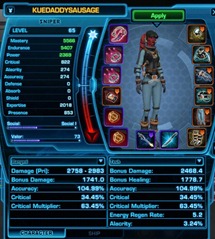 No Screenshot at this time, will update. But here are the gearing that you’d need

The tricky part about PvP is that it’s hard to have a SET rotation, because everything is so situational. What I will usually do in the beginning of the match is –

Positioning in Team Ranked PvP and Solo Ranked PvP is what makes the difference between a bad sniper and a good sniper. Unless you have to, you always want to be behind your frontline. In solo ranked you want to make the enemy dps go through your dps to get to you, all while getting hit in the process. In Team Ranked positioning is important because Guard only has a 15m range, and all your abilities are 35m range, so you need to be close enough where you can either roll into guard range, or the tank and quickly get to you. You don’t want to be close enough to the point where you can get cleaved with your whole team. (Cleave means when an enemy AoEs and hits multiple people with it.)

Knowing your enemy cooldowns is one of the greatest things to know. You obviously don’t want to autocrit ambush a jugg who has reflect up. or try to stun a sniper who is entrenched. Pay attention to what defensives your enemy has up, to do so learn what the animation looks like and what the buff icon looks like on their tray.

As a sniper you hit like a truck, so usually the enemy tank will guard off your target, making it hard for you to burst them down. A common trick that I love to do is wedge yourself between the enemy and your target and knock them back, separating them by at least 30m, giving you the chance to hit the unguarded dps/healer and possibly the chance to kill them. (I do this in one of the videos I will link further in the guide).

Diversion is every snipers best and worst friend. It rips you out of cover and debuffs your accuracy by 45%. But fear not, you can roll resist diversion. In order to roll resist diversion you once again need to learn what the animation of diversion looks like. The animation looks like the character is throwing a grenade and then a green grenade comes out flying towards you. Your reflexes need to be strong. You have probably a one second window to dodge it, and it won’t always work. But it is possible. You want to roll as soon as you see the snipers arm throw something.