GW2 Developer Crystal Reid goes over the details in designing the Sabetha fight.

Sometimes when people who don’t play video games ask me what I do for a living, I just tell them I come up with fun and interesting ways to kill players, which either answers their question or confuses them further. Either way, it’s the best part about working on the Raid team.

With the upcoming release of Salvation Pass, we wanted to do something a little different with a blog post. Since we don’t want to reveal any of the secrets or mechanics in the new raid release, we thought this would be an awesome time to do a deep dive into how we designed and built the encounter with our final Spirit Vale boss, Sabetha.

Sabetha’s origins are a little different from the Vale Guardian or Gorseval. The encounter is very loosely based on an old map that was never used. Our resident map artist Tirzah Bauer had built out this amazing tree fort suspended high above a forest a few years ago. Since that day, we’d talked about creating an epic boss in the area. As luck would have it, Tirzah was also assigned to the team to bring Spirit Vale to life. 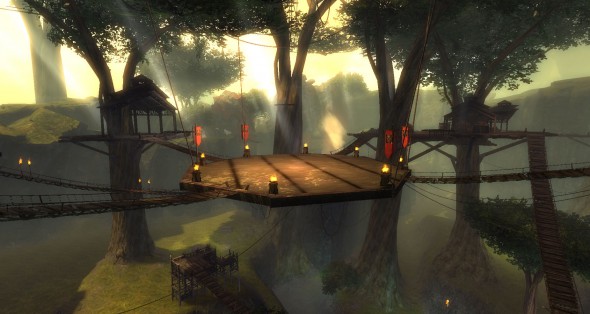 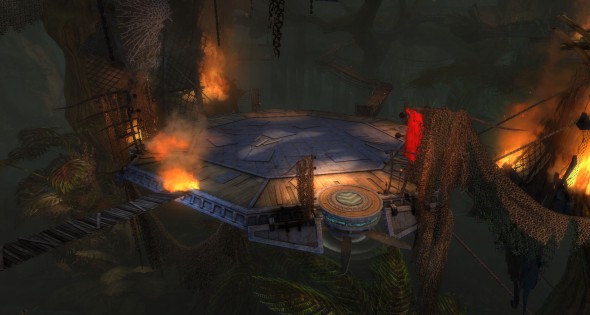 Once we had a solid idea of the type of encounter we wanted to build, we then focused our efforts into documenting the encounter so that someone could approve our wild idea. To aid us in this process, the team developed a new raid-encounter template as a guide to help us make sure we built a full encounter that touched on everything from narrative to level design, mechanics, play and build roles, achievements, and even expected gameplay (yes, part of these documents look like boss guides). Working from this guide, we can make sure that we’re building a cohesive experience that brings out the best of what Guild Wars 2 has to offer (more details on this in our last blog post, Designing Challenging Content). For fun, here are some of the original design images we created as part of this document process. 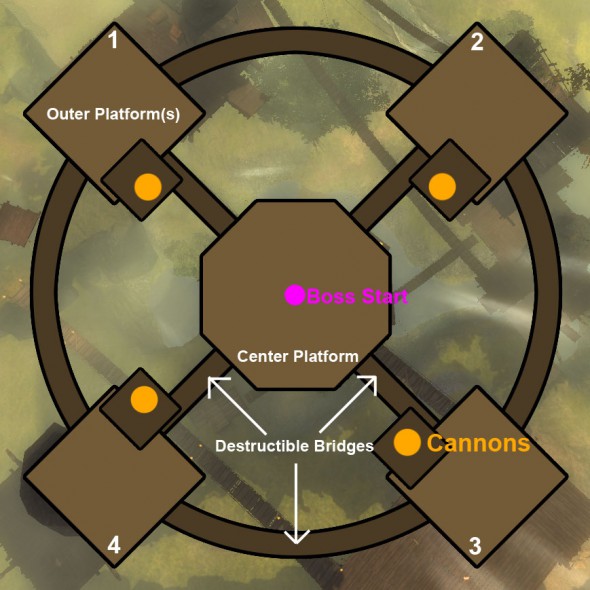 You can see from this image that the play space was a lot different from the first iteration to the final shipped product. The main platform is still the same, and we still have the outer platforms with the cannons. However, the process of getting to a cannon used to be “some guy runs out there” using bridges that connected to the cannon platforms. When a cannon spawned, it would also spawn a bandit arsonist who would attempt to burn the bridge down. We intended the gameplay of killing cannons to be a quick, in-and-out process with a small strike team. If a bridge burned down you could still recover, though with a penalty. It all sounded great on paper. And then we hooked it up. It was disappointing to say the least.

Ultimately, it wasn’t fun. The distance the strike team had to cover was huge. By the time they were able to get out and kill a cannon and the bandit arsonist, the next cannon was getting ready to spawn. It created this horrible loop where if you were assigned to the cannon strike team, you were never able to fight the boss.

So here we were at our first design challenge. We loved the idea of these cannons raining fire down on a platform and creating environmental obstacles for players to avoid, but we hated all the running that was required of players. Somehow the concept of “rocket jumping” came to mind. We quickly built a prototype of Explosive Launch and scheduled a session to test it out. Once we launched the first player up and heard the laughter, we knew we had a solution. Explosive Launch solved the stretches of boring running, created a really interesting coordination check, and—most importantly—it was fun. Who doesn’t love blowing up their friends? Mike Zadorojny, that’s who.

Skills to Pay the Bills

Sabetha has a number of unique skills in her arsenal, but her Firestorm attack is the centerpiece for her in terms of both wow factor and complexity. 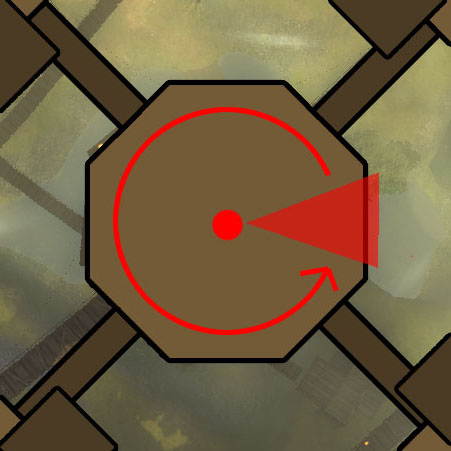 Firestorm went through about three different scripting iterations before we found one that worked. The first version worked but had a major performance impact. The second iteration sort of worked. It was much more friendly performancewise, but it could get out of sync, frequently causing it to do bizarre things, like randomly killing players without great feedback. The final iteration took more time to build, but ultimately it was the one that had the least performance impact on the game and did what we needed it to do. 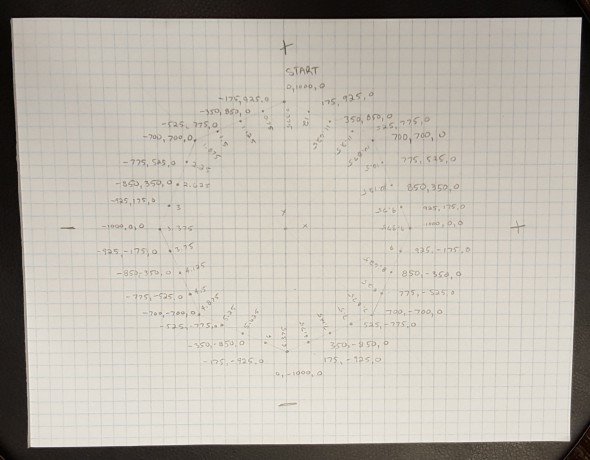 The image above is how we plotted out the skill on paper before we scripted it. The outer numbers represent the location the attack would target, and the inner numbers represent the time at which the attack needed to be created in order to form a seamless moving wall. You can see by the inner numbers that the first iteration of the skill was 12 seconds long, but the final timing was 10 seconds. Raid programmer Trevor Bennett assisted in the script portion of this with some queries that allowed us to generate a lot of the math and timing through a single value so the skill could rotate on its own. These actions opened the door for a whole new class of skills and abilities we can now create!

Next we had to hook up an effect to the attack for testing so we could message what was going on. Franco Galletta, our VFX artist, gave us a prototype effect of the skill. This was basically a blue, untextured stick that would just rotate 360 degrees that we could control the timing on—check the next image to see it in all its glory! We used this effect for a while until we were sure the skill was built to satisfaction. Franco polished things up from there, adding fire and smoky particle effects.

The final thing we had to do with the skill was message it properly. We hit up the Audio team and showed them the skill. Sound Designer Keenan Sieg came up with this great charge-up sound that plays just before the flamethrower erupts. We coupled that with a simple line of dialog and a telegraph to indicate the direction of the attack. The final result is something that severely punishes you for your mistakes, but ultimately isn’t difficult to deal with. That is, unless a thug kicks you into it. 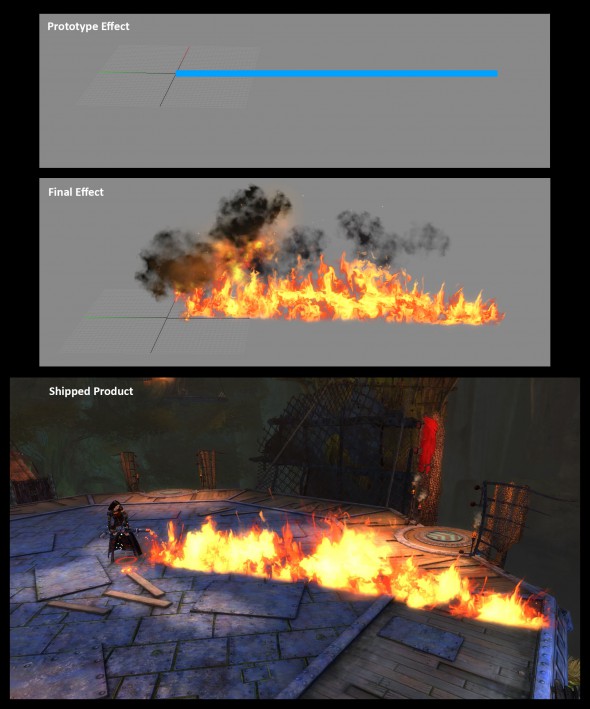 One of the final challenges we had with Sabetha was the usage of the Sapper Bomb skill. The original version of this skill would shove a bomb into your hands without warning, replacing your attack skills with a new set of bundle skills. We often had people throwing the bomb away accidentally during combat when this occurred, which would put the entire group behind in DPS while waiting for another bomb. There was also one complaint that stood out, which was, “I want to be able to use my skills to help get the bomb to my target faster.”

That statement pretty much summed up how we felt about the mechanic as well, and it led to us requesting what is now known as the Special Action Skill. The SAS gives the Raid team a very powerful tool we expect to use often in the future to help create interesting encounters. It’ll be making an appearance again in Salvation Pass, so look for it during a critical time in one of the boss encounters!

Over the course of implementation, testing, and iteration, many elements of the Sabetha encounter have changed from the original design doc.

So this is roughly what some of the journey looks like when we take an idea from a concept to a completed raid encounter! We hope you enjoyed this insight and look forward to seeing the death toll rise in Salvation Pass!

I want that flame wall as a foot trail to a new legendary (>:~})

I want them to fix that godawful migraine-inducing gimmick noise on the Predator.

Is this kelethin or what ?