A guide to the Black Desert Online Conversation minigame and gaining Amity.

Every NPC in Black Desert have something called Amity, a measure how of they like you. You gain Amity primarily by engaging in a conversation with them, which costs energy. Additionally, you can gain amity by waving at them via F1 but that it isn’t very energy efficient.

Getting higher Amity with NPCs rewards you. NPCs will share knowledge, have additional conversations, give you new quests and even offer you special items via their shop. To check what Amity for each NPC give you, interact with them and look at the Amity wheel on the bottom left. Beware that for items you can purchase when you have reached a certain Amity, you will lose that Amity when you buy the item. 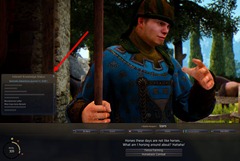 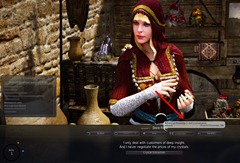 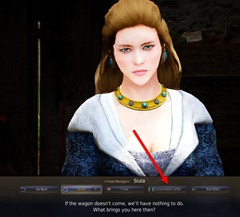 The Conversation Mini game to gain Amity can be very confusing both through confusing design and bad localization. 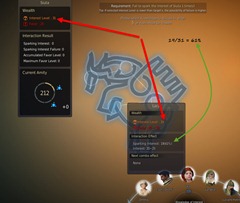 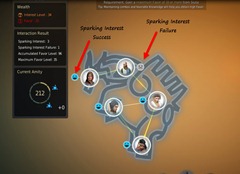 The term Interest here is confusing because it has nothing to do with the Interest Levels and the Sparking Interest mentioned above. Rather it is the difference between two Favors. Interest is calculated by (Favor of the Knowledge – Favor of the NPC). So if we take look at the Situa/Lara example above again 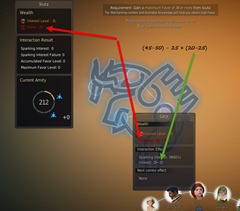 Now that you know Interest Level,Sparking Interest, Favor and Interest, it is time to look at Accumulated Favor Level (AFL) and Maximum Favor Level (MFL). To do this, we need an example conversation and keep the following formula in mind.

We will pick 5 Knowledge in the following sequence.

Dora: Dora has an Interest range of 8-11, in this conversation an Interest of 9 was rolled. Maximum Favor Level (MFL) is therefore 0+ 9 =9. (It is shown as 0 in the screenshot because Maximum Favor Level is always calculated one step behind the current Knowledge, which makes it confusing). The AFL is calculated as Previous AFL + Current MFL = 0 +9. 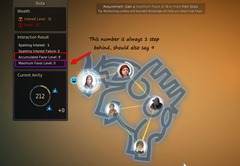 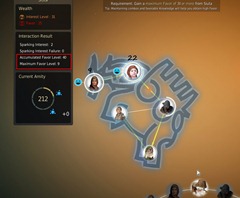 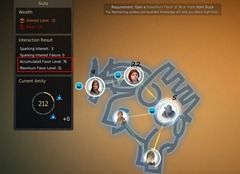 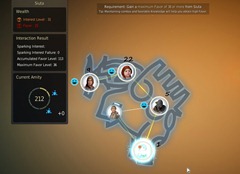 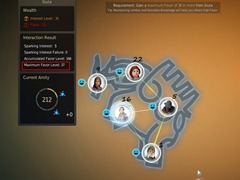 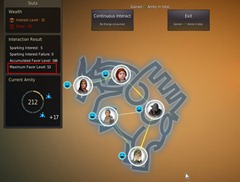 The example above might be confusing the first time you go through it since there are many things to keep track of. To make this easier, here is a simplified example.

Lets assume the conversation has room for 4 Knowledge, so that is 4 rolls. All 4 rolls have Sparking Interest success.

The confusing thing when you look at the ingame way of displaying AFL and MFL is that it doesn’t tell you the Interest roll numbers (you have to deduce it based on the AFL and MFL) and the MFL is always lagging 1 round behind.

We will pick 5 Knowledge in the following sequence. 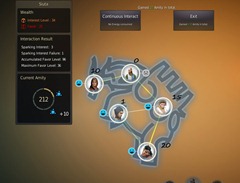 Combo Effects is pretty confusing due to the wording. Lets take look at Amerigo,a Knowledge with a combo effect of “After 3 turns, Favor will be reduced by 3 for 2 turns”. What this means is that, after 3 turns (including Amerigo’s turn), the Favor of the NPC Suita will be reduced by 3 for 2 turns. The Favor here means Favor of the NPC, not the Knowledge. 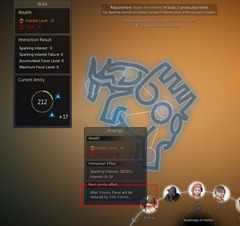 If you hover over the last 2 Knowledge Spots, which is affected by the combo from Amerigo Knowledge, you will see a +3 in blue under Favor of the Knowledges that occupy them. This is basically the same as reducing the NPC’s favor by 3. 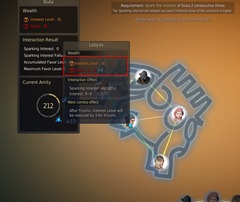 Since most Combos only activate after a couple of turns and last for a few turns, it is advisable to place them in the front for the most benefit. Always check that the Knowledge with the combo has a high Sparking Interest since if the combo Knowledge has a Sparking failure it won’t apply the combo.

To succeed in the mini game, you must follow the requirement. Otherwise you will be kicked out of the mini game and not gain any Amity. There are four types of Requirements 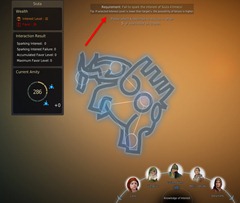 Continuous Interact requires no energy and give you bonus Amity but if you fail one of the Requirement you lose all the amity you have earned. If you don’t have a good selection of Knowledge then you can play it safe and use Exit when you feel you have a high enough Amity and rather not take the risk of losing it. 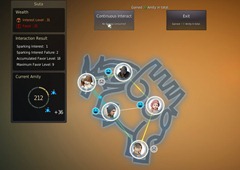 You can only do Continuous Interact twice per conversation.

There are no hard calculations for Amity Gain but it seems to be around 10% of the Accumulated Favor Level. In addition, if you do Continuous Interact, it appear to give you extra Amity.

If you have the same Zodiac sign as the NPC you will also gain extra Amity.