A guide to Matthias, the last boss of Salvation Pass raid. Special thanks to members of [zQ] for the kill and Rubik for the initial guide which much of this guide was based on.

Matthias Mechanics Chart made by Rubik, helps to reference mechanics once you read through them all.

Matthias will jump up in air and land with a slam, spewing out a ring of red bloodstone shard projectiles that hits for 3.5k per projectile. You do not want to reflect this as each shard give a stacking 10% damage buff to whoever hit by it and if you reflect all of it back to Matthias, you will greatly enhance his damage and wipe the raid. If you have any blocks or skills that allow you to take zero damage such as Defiant Stance/Endure Pain/Signet of Stone/Infused light you can eat the attack and gain the damage buffs. 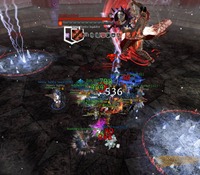 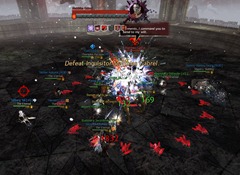 Usually you just want to dodge to avoid the attack. If you stand right next to Matthias you will take all the shards and down instantly.

When Matthias put up his red-purplish looking dome shield, you want to have projectile reflects (and reflects only, no projectile destruction or conversion) right on him. This shield will give him 18 stacks of a particular buff (

)that will make him immune to damage (he takes reduced damage with one stack but anything higher he will not take any damage). When this dome is up, Matthias will use a machine gun like attack called Blood Shards so you want to reflect this attack back onto Matthias as this will remove these stacks. If you use any projectile destruction/conversion you will simply destroy the projectile and the buff stacks will not be removed. 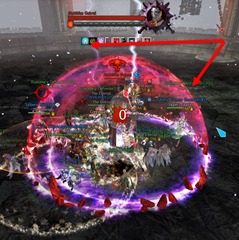 Corruption is a mechanic where a random player will receive a green skull above their head and an orange circle beneath their feet. When this happens, they will need to run to one of the four fountains around the room to cleanse it off themselves. It is advisable to use squad markers to mark each of the four fountains before the fight starts so players know which fountain to run to. Corruption deals 4k damage per tick to anyone inside the orange circle so you want to cleanse it off yourself ASAP. The circle do not disappear when you get downed so whoever is rezzing the downed person will also take Corruption damage. 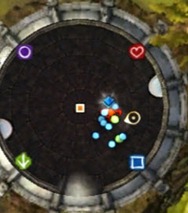 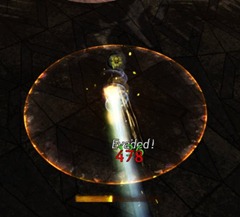 Each fountain has a cooldown before they can be used again. A clean fountain will look clear while a tainted fountain on cooldown will appear reddish with black particle effects on top. If you do not have the Forsaken Thicket Waters mastery, you will be stunned for ~ 3 seconds when you use a fountain which is not ideal because you will be continuously taking the Corruption damage while stunned and have a high chance to go down. 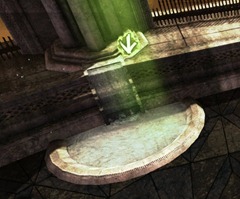 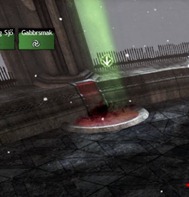 Matthias has an aggro mechanic where he will follow the furthest person from him so you can use someone like a Reaper to kite him closer to the next fountain so there is no confusion on which fountain should be used next and there is less distance for players with corruption to travel. We usually use the fountain in a clockwise fashion but you can do any order you like.

Starting at 9:45 and occurring every 45s, a random player will be picked for sacrifice. Their name will be displayed in red text and there will be an arrow pointed on top of their head. This person be crystallized in a red crystal and turn hostile. Their HP will be converted to a 100k HP scale (i.e. if you have full HP at time of sacrifice, you will have 100k HP. If you have 20% HP, you will have 20k HP) and they will gain a breakbar. Raid members must break that breakbar in under 10 seconds or the sacrificed player will die instantly (no downed stage, instant death). Usually the sacrificed player’s HP won’t be an issue if they are at full health as 100k is usually enough of a buffer but if they are low in HP when the sacrifice happens they can die from the damage from crowd control skills (no downed stage, instant death). 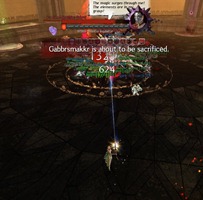 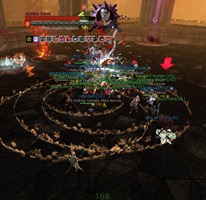 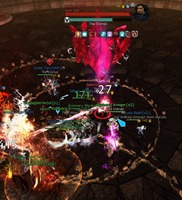 Ice Phase lasts from 100-80% HP. All of the General Mechanics listed above will be present in addition to some extra phase specific mechanics. In the Ice Phase it will snow in the fight arena with a white background in the exterior. In addition, Matthias will have a snowflake icon buff ( 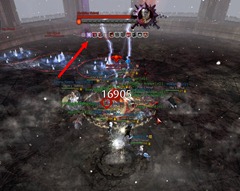 Ice Phase has a passive mechanic where players will continuously take damage from Snowstorm (about 2k damage every 3 seconds). This makes it hard for downed players to revive themselves since the damage will override their self-resurrect. Additionally, players will receive Chilled debuff every10 seconds which can make it hard for players with Corruption to get to their fountains if not cleansed.

Icy Patches spawn randomly in the fight arena. They will knockdown any players that cross through them and apply the Chilled debuff. These patches can be targeted and removed by any burning effect such as Feel the Burn from Tempests which are great at clearing out these Icy Patches due to the low cooldown. Druids can also use Sun Spirit, which allow your party members to use their ranged attacks on the Icy Patches to remove them. 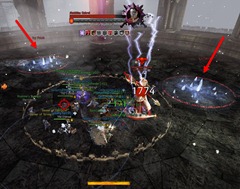 Oppressive Gaze a mechanic exclusive to the Ice Phase that usually occurs right after a Blood Shards/Bubble Shield. Matthias will spin his staff and spit out a massive purple-reddish orb like the Hadoken from Street Fighter. You will want to dodge this or get behind/to the sides of him as this attack will usually instantly down anyone unless they have Protection/Blocks/Invul.

The general strategy to avoid the Hadoken is to watch Matthias closely after the Bubble Shield and pay extra attention to where he is facing. You want to get behind him or to the sides. If that is not possible, dodge as soon as you see a fast moving orb coming towards you or you may even have to dodge earlier when he is in the middle of his spin.

Fire Phase lasts from 80-60% HP. All of the General Mechanics listed above will be present in addition to some extra phase specific mechanics. In the Fire Phase the exterior of the fight arena will have an orange glow. In addition, Matthias will have a fire icon buff ( 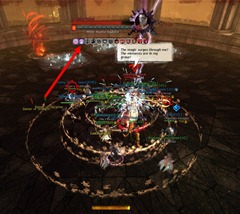 Fire Phase’s passive mechanic is 3 stacks of burning every 10 seconds. In addition, if you do not move, you will receive periodic damage, which is fairly minor.

Two fiery tornadoes will spawn in the room and they will path randomly. If you get caught in the Fiery Tornado, you will take damage and be spun around, unable to do anything for a few seconds. Beware that the range the Fiery Tornados will suck you in is bigger than the orange circle they occupy so if you stand close to them you will still be sucked in. 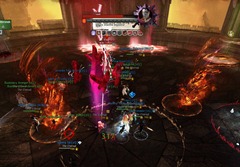 By themselves the Fiery Tornado won’t be able to kill you if you are at full HP. However, if combined with another mechanic like the Poison fields in Fire Phase or Corruption, it can be very deadly.

Every 10 seconds, a random party member will receive a Skull icon (

). They have 10 seconds to run to to a location and use their Special Action key to drop the Well of the Profane.  If they don’t act quick enough or if they get downed, the red poison well will get dropped at where ever they are. 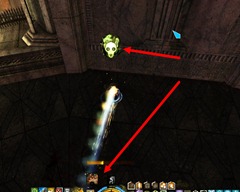 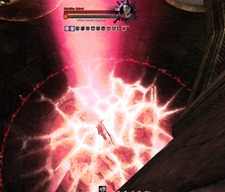 It super important that you do not drop this Well of the Profane  in the middle of the room, especially in the same location as the sacrifice as this can be a raid wiper. You generally want to drop it at edge of the room away from the fountains. The red poison wells lasts a very long time.

Rain Phase lasts from 60-40% HP. All of the General Mechanics listed above will be present in addition to some extra phase specific mechanics. In the Rain Phase the exterior of the fight arena will appear cloudy and it will rain inside the arena. In addition, Matthias will have a rain icon buff.

In the rain phase, when you move, you will get a stacking debuff (

). When this stacks reach 10 stacks, you will get a new debuff (

) that will knock you down if you attempt to move while also resetting your stacks. The trick here is to simply stop moving when you reach 10 stacks and the new debuff will go away in a few seconds. If you use dodge/movement skills, you will not gain any stacks. 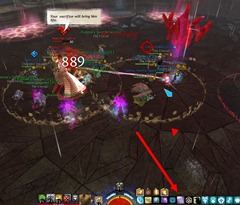 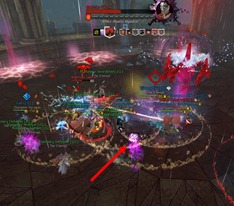 The other passive effect is 5 stacks of poison every 10 seconds. Since groups are not stacked tightly in this phase this can cause the poison stacks to accumulate if the condition removals don’t reach the far players. Because poison decrease your healing skill effectiveness by 33%, it is more problematic than the other passive effects.

In the rain phase a single storm cloud will rotate around middle of the room. If you are caught in it, you will take damage and it will increase your rain debuff stacks, making you getting knocked down faster. 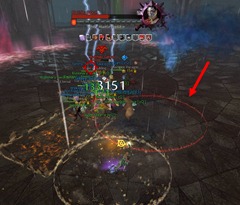 Five random players will receive bombs under their feet and need to move out away from each other. They are much like the Timed Bombs on Sabetha. You can overlap the bomb circles as long one person isn’t inside two bomb circles. The bombs don’t explode until the red inner circle reaches the other circle so you have time to move out. Beware of the rain debuff as it can knock you down at inopportune times. 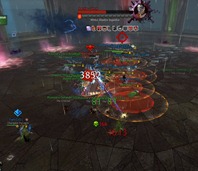 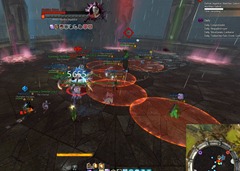 These mechanics are present in the entire Abomination Form (40-0%). Matthias no longer wields his staff and won’t sacrifice anymore players.

Instead of jumping up and slamming down his staff, the Abomination Matthias will simply jump up in the air and throw down Bloodstone Shards. Each shard has a red circle where it will land so even those at range will need to dodge. 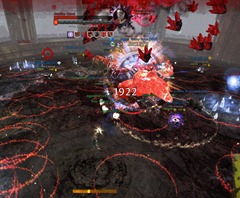 The same bubble shield mechanic exists in the Abomination form. Since Matthias much bigger in the abomination form, you will see him standing above the shield, with one leg up. 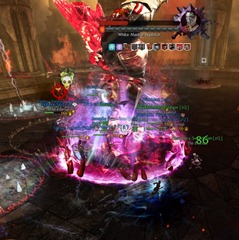 The same identical Corruption mechanic exists in Abomination form and has not changed at all from the human form.

Ghost spirits are unique to the Abomination form. The spirits spawn in blocks of 45s. The first spirit will spawn, take 15s to walk one end of the room to the other through the center of the room. The second spirit will spawn immediately after and take another 15s to walk across the room. Then you get 15s break where no spirits spawn. This repeats until the fight is over.

These Ghostly Spirits deal massive damage to anyone that is unfortunate enough to get caught inside their orange circle. If you let a spirit fully walk through you, you will get downed even if you are at full HP. No matter where they spawn, they will always walk through the center so if you pull Matthias off center your group can avoid most of the spirits. 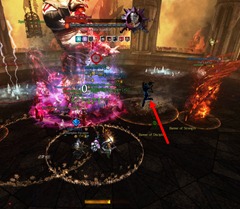 Timed Bomb is no longer a Rain Phase only mechanic. It will occur in all the phases and affect all 10 players. 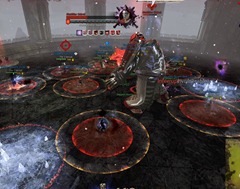 This Hadoken attack is also no longer exclusive to the Ice Phase. It has a different and faster animation where Matthias will simply step back, shift his body to the side and then shoot a fast moving orb.

These phases largely remain the same with the exception that Hadoken/Timed Bombs are no longer exclusive to Ice/Rain phases. In addition, the phases are no longer % based but rather timed based. Matthias will go in the repeating pattern of Ice –> Fire –> Rain with each phase lasting 30s.