This guide will have been made solely because there has been no other guide, made or updated, since the sniper nerfs. A good many people see the dps that MM pulls after our crit nerf and are completely turned off from the spec, some even from the class because mercs/maras seem to consistently pull better numbers, although I can’t promise that with this guide you’ll be top dps you should at least be able to keep up if you weren’t already.

Keep in mind I will be keeping this updated and checking comments to see if anyone has pointers of their own, all advice/criticism is welcome and will be tested.

The reason I’m including this part of the guide is because most snipers have been following thrax, and his numbers haven’t been updated, this is just to get an general idea of where we stand since the nerf nothing big here you can skip this part completely if you have no interest as this is from personal experience nothing factual.

The dps rating is a little tricky for the reason that MM’s rely heavily on staying still for casts so if you use this spec on a fight that forces mobility you will drop off a bit, but this guide tries to deal with that. But on fights you can remain stationary even after our crit nerf we pull great numbers.

If you remember thrax guide you’ll remember he put them at 10/10 the reason I put them 1 lower is because this guide sacrifices a small amount of mitigation for extra mobility. But between your shield probe and utilities snipers should still take very little damage unless you’ve pulled aggro.

Yes, as much as I hate to admit it and as much as I still like this spec, it is not as viable as it once was. That’s not to say you wouldn’t be able to make it work, but make no mistake virulence outshines this spec on many a fight. It depends a lot on the player but 9 times out of 10 an op team would be more successful with a virulence sniper. I personally started as a virulence sniper and changed to MM a bit after the nerf to see why everyone was so mad I then ended up sticking with it.

Really it’s that simple. Not much else to say the rotation I will post later on will be very similar to Thrax’s with a slight change and even his rotation was easily 1/10 difficulty don’t know why he posted it at 5/10 xD. The problem is energy management more so than the actual rotation

This is where one of the bigger changes occurs, I’m sure many won’t like it, or think it would ever be useful but give it a try. I will only be listing the utilities that are used in the guide, not the lot of them as you have a sniper and can just as easily open your utilities and check them out. Following is a pic of all the utilities unused if for whatever reason that helps.

Snap Shot: Entering cover makes the next Snipe or Lethal Shot activate instantly. This effect cannot occur more than once every 6 seconds

Special note for this one since it’s what many MM’s dislike taking, the only reason I can think of not taking this is if you’re someone who just wants to be stationary throughout the entire fight with no real means of keeping at least some dps on boss. When you need to move it does a good amount more than the damage of your auto attack and with the addition of costing 0 energy for 4 shots it can be a good way to manage energy if you’re running low. Run out of cover shoot your 4 shots ,back into cover instant snipe.

The Calculated Pursuit utility will be replacing Pulse screen which is a 20% damage reduction from tech/force abilities for 6 seconds every time you use cover pulse, I trust my healers enough to keep me through most everything especially with shield probe, not to mention cover pulse is a 30 second cd. IF there ever comes a fight when me the healers or I notice I take way too much damage it’s easy to switch the utility point.

Pillbox Sniper: Reduces the cooldown of Entrench by 15 seconds and Cover Pulse knocks targets back an additional 5 meters.

Augmented Shields: Increases the amount of damage absorbed by Shield Probe by 30%

Siege Bunker: Reduces all area effect damage taken by 60% while Entrench is active.

Deployed Shields: Reduces all damage taken while in cover by 5% and reduces the cooldown of Ballistic Shield by 30 seconds

As you may have noticed most of the utilities already focus on damage reduction so the loss of the mitigation utility from skillful shouldn’t effect you very much unless you like to stand in front of tanks or in red. Dots that are put on you are usually cleansed thus do minimal damage as is, and there is a good amount of aoe damage reduction that we already get. 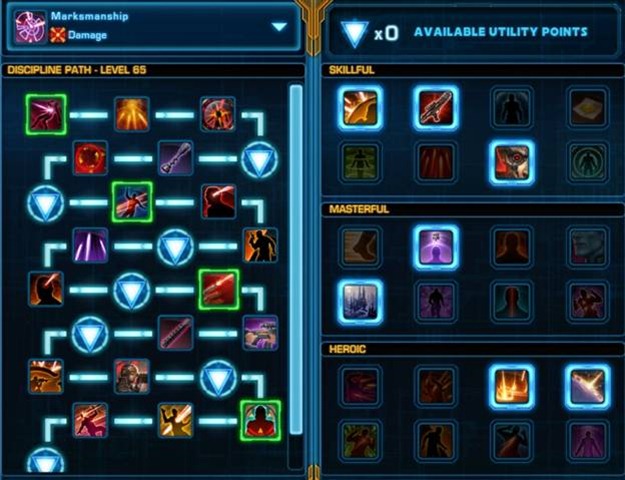 For AoE intense fights instead of calculated pursuit you take Imperial Efficiency everything else stays the same.

There was nothing that needed changing here from the guide thrax had up so you should still be aiming for the same stats he has posted. I will post them here but all credit for the stats section goes to him : http://dulfy.net/2015/11/27/swtor-4-0-marksmanship-sniper-pve-guide-by-thrax/ for his guide.

The above stats are with 224 gear.

The only difference with stats is I’ve noticed some people like to be under the %110 accuracy (684 accuracy stat) cap and take the new acc stim, It’s really just preference but I’d still cap my accuracy and go with the mastery/power stim.

As a side note, I cannot stress enough how amazing the 6 set bonus for MM is, that should be your priority if you don’t have it yet.

Just incase you can’t make it out the grayed out skill is Followthrough. The rest goes like this :

If your tank has to move your target so far that it won’t be in the range of OS, then skip the OS unless you’re willing to wait until the target is in one place to start. Popping adrenals is up to you I prefer to use it after OS has been cast. Something to mind is your aggro, if you don’t have tanks you trust, either ask for a guard or use your Countermeasures to drop right after your first ambush. With a dedicated raid team I doubt you’ll need to, but with pug groups it’s a safe bet you’ll pull aggro with this opener.

Small change to the opener

You want to time it so that your ambush goes off at the same time as the first orbital strike, but if you miss it no harm done just a fun way to watch the numbers jump.The opener remains almost unchanged from the previous guide aside from the extra Corrosive dart that I throw out after the third Followthrough. The reason I send out the second dart earlier than thrax is because if you do that you have enough time before the debuff wears off of the target to switch into your main rotation and only reapply it when you finish the last Followthrough in the main rotation.

The auto attack is only there as a filler so don’t worry about that unless you’re under 50 energy and have no cd’s to bring you back up. Sniper volley is used on CD, and Corrosive dart will have to be refreshed when the “Marked Target” buff wears off.

What should be done

Below 50 energy? Adrenaline Probe This may happened very early in the rotation don’t be afraid to use the probe early on it’s fine.

Below 75 energy and feeling uneasy since AP is down? Use Target Acquired, if you still feel unsafe at 85 use 1 auto attack to get yourself back up to 90+

Below 50 and no CD’S? Get out of cover and use your 4 free overload shots, once you’re back in cover if you still feel unsafe about your energy use another 1-2 auto attacks if you feel safe then back to the rotation you go, But if you’re doing the rotation itself correctly AP should be coming up shortly after you re-enter cover. To be honest most fights force you to move out of cover before you get to this part so I doubt you’ll be this low on energy again before AP is up to use.

The goal is to stay above 50 with 30 being the lowest you can go without annihilating your dps.

The only other thing I can offer for energy is if you really don’t feel like you’re getting this rotation down don’t use a third snipe instead replace it with your auto or ambush if your alacrity is where it should be.

Fair warning, if you hit even a single extra snipe, you will end up with no energy VERY quickly.

If there’s anything you feel I missed or could have explained any better, let me know and it will be fixed. If this guide ends up being good enough Ill post up a video for the rotation and dps otherwise it will remain all text good luck and hope for a buff to MM xD