A guide to the new Unidentified Lodestone events and achievements added with May 3 Game Update.

This is a set of 4 new achievements introduced with May 3 Game Update and can be found under General –> Current Events (you won’t see the achievements until you completed them). To start off you will need to acquire an Unidentified Lodestone.

Unidentified Lodestone have a chance to drop off any of the dragon minion mobs (i.e. Svanir, Branded, Destroyer). I got mine off the Svanir/Ice elementals in Jormabakke Stead in Snowden Drifts but anywhere with these type of mobs will work.

Once you have the Unidentified Lodestone, go to Magister Ela Makkay in Lion’s Arch and talk to her to get the Pursuit of Knowledge achievement. This will reward you with 3 AP and a Keg of Liquid Karma (7500 karma).

Ela will direct you to three events in Snowden Drifts, Blazeridge Steppes and Mount Maelstrom. These events are on a 10 min respawn timer. 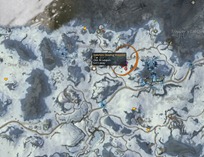 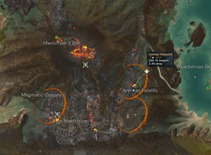 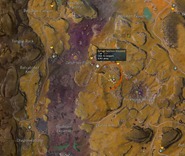 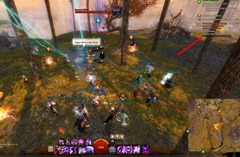 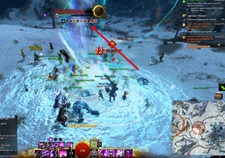 If you complete all three events you will get the Ley-Line Cartography achievement, which give you 3 AP and Tome of Tyrian Mastery that grant you a large amount of Tyrian mastery XP 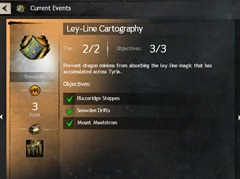 Now there are two other achievements. First is Hold the Line acquired during the first event where you don’t let any of the dragon minions touch the accumulated Ley-line Magic. This is easy if you have a large zerg that kills anything that spawns. The second achievement is to kill 5 of the Coalesence champions which can be done at any of the three events. You do need to spam your skills after the first event as the champions have very low HP. 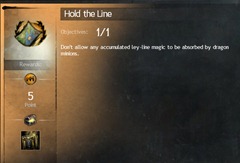 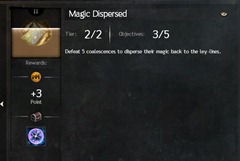 this was excessively easy. i hope it’s only the first of a long chain of events.

has anyone let the event fail yet? i’m curious what happens

It might in a couple weeks, or in the middle of the night for US. Depends how the mobs scale.

That is what I meant by mob scaling, I guess you thought I meant hp/damage.

It may get renamed to something else later to avoid spoiling something like War against the Dragon Alliance.

I only got 3 achievements, how do I get the hold the line one?

Don’t allow any accumulated ley-line magic to be absorbed by dragon minions.

Fun though the wait is, any idea if the 10 minute refresh adheres to a schedule?

my experience blazeridge –> maelstrom –> snowden start within 20 sec of the last one ending (incl. champ event)

So there is nothing special you get out of it like a new item or anything trivial?

What if I don’t have HoT?

Future updates are intended to be content for people who own Heart of Thorns. Fractal changes and the like were merely polish.

Fuck me. Guess’ll have to buy it then. Fuck CAD exchange rate -_-

Canadian too, but the prices are better than when I bought HoT.

Deluxe or ultimate is worth it, just do it and skip food or shelter this month.

Works for non-HoTers just fine. I haven’t been able to get the lodestone to drop yet though, but I’ve finished the other three achievements.

we can only hope the next step will be more rewarding as this one …. nothing but achievment points to players with full exp

Wonder if you get an extra large dragon minion instead of a glint coloured spark if you fail the defence?

Achievement points are a great reward

remember the beginning of LS1? there was not much to do and much to gain. its about building up atmosphere. you know, a game is not only about rewards. its supposed to be about feelings and stuff, propably fun too. oh the kids these days /kisses

Warning that the xp tome takes effect immediately upon receipt, so if you’re expecting them to release new central tyria masteries and want that SLIGHT edge then don’t open the chest

Dont finish the event, it automatically open. Its only 125k xp

Quit the bullshit; it only opens if you accept this, not like it’s a big deal.

I had the good fortune of speaking with a dev during the event and asked about the significance of the xp tomes.

there is none, he said they are purely a bonus reward for those who haven’t completed their masteries, and they are not hinting at more tyria masteries

It’s not like Central Tyria masteries are anywhere time consuming compared to the Heart of Maguuma ones, so I’m probably just going to consume it to get it off my UI.

Thank you for this!

I think its safe to assume that this event is the pre bug checking patch before a major living story. Just like they did with kessex hills

What happens if either of the 2 events fail?

Probably nothing special. They will just start again in 10 minutes.

Hi Dulfy, how long will the current event last ?

Interestingly, Leyland energy has traditionally been blue and white. These surges are in the colour of that dragon egg we were lugging around.

Nice catch! Now that you mention it, you’re absolutely right.

I think that leyline energy has the same color in the second raid map, which also takes place after mordremoth’s death. So it could be linked to the additional energy released from his body in the leylines.

Is there a point doing this events if someone already have ( at the moment) all 166 masteries?

How about AP + instant XP item for future masteries? Sound fair to me.

Nope, because ANet [as always] says “fuck you” to their veteran players that already have all masteries, by making the xp item insta usable when you get it, so you will need to hold that annoying chest above your mini-map if you want to hold if for future Tyria mastery.

This thing that is going now is probably a mere start, so there will be like 30x125k xp. That is something.

3 minutes in CoF isn’t much

I hear this event is some sort of test to see how things go. True or not, I don’t care. I just have that feeling that there is going to be more on the way very soon-ish. For me, I hope Living World Season 3 drops this year because I want to know on what is going on with that egg and which dragon we’ll be facing next!

It’s 100% certain and has always been certain, that LS3 is coming this year. If it doesn’t, the game population would literally halve at this point

I agree on the population hit. People are biting at the bark hoping for new content to hit in any way, shape or form with more replay value involved soon. Too bad that ANet wouldn’t do something to how City of Heroes had it by dropping content every 3 or 4 months instead of long wait periods.

For me, I can’t bicker too much. I gave them money and still do from time to time so in a way I still feed the beast as they call it lol.

Actually, Hold the Line is easier with small number of people, because big zergs have champions and lots of elite mobs spawning.

no new achievements with them i could see but the event is now happening in multiple places, was in snowden and saw it happen at [Valslake Waypoint]
plus (perhaps this is always what happens with a fail but i never saw it before) at the new one there was several champion imbued abberations, i think 1 spawns each time the event fails.

Can you still do these after the newest patch?

I have 2 unidentified lodstone.. when I spoke to ela only 1 disappear.. what should i do with the other one?. Anyone please answer should i destroy it ??

Are these events still going on?

I cant seem to get an Update from the last area: Blazeridge Steppes.
I have the other two already…
Main problem is main event is only kill robots and collect lay line energy and put in device.
Anyone got exact location of the champ spawn location so I could finish this achivment please?

nm got it,seem they arrive later after the robots and its purply minions then the spider champ

Any one wants to do Hold the line together?

I want. PM me in the game: Aldarel

Is it still possible to get these achievements?

way more than 10 min, interrupted by the other leystone events…

I can’t seem to get an I identified lodestone to drop.