A guide to the Ley Line Research events and achievements added with the June 1, 2016 Game Update.

You may get a mail when you log in from Ela Makkay telling you to visit her in Lion’s Arch. You can ignore it if you wish as it is not relevant except for lore/background purposes.

The story here is that there are 3 parties interesting in getting Ley Line for their research. The Inquest, Priory and the Consortium. You can’t help the Inquest but you can help the other two parties to collect Ley Line. Now there are 3 possible spots where a new event spawns roughly every 20 minutes. 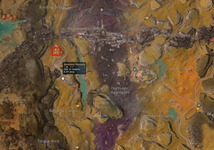 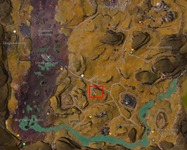 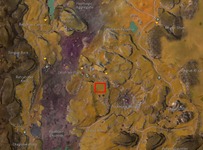 The Consortium party is situated at The Last Whiskey Bar Waypoint ([&BPkBAAA=]) with the expedition headed by Manager Flinzz. The Priority party is located left of Refuge Sanctum Waypoint ([&BAUCAAA=])with the expedition lead by Magister Keadin. Now roughly every 15 minutes or so an escort event will start at the that location involving the mentioned NPCs. They will pick one of the three spots for the event and then walk there. Because the location they pick is totally randomized, it is possible that Priory and the Consortium will pick the same location and have a 3 way fight with the Inquest. Other times they will pick different locations so there will be two simultaneous events happening at the same time but the Inquest will be at both. 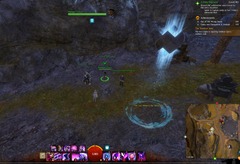 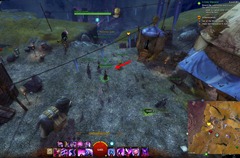 The event as mentioned above happens every 20 minutes. Because there are 3 possible spots for the event, it is not advisable to park yourself by the event location but rather at the Consortium/Priority party camp so you can just follow and escort them every 15 minutes or so.

The event is basically you beat up waves of Inquests and their golems. There is a giant orange looking orb that moves around and drops off small Ley Energy (with a hand symbol above them) on the ground every few seconds. Pick up these Ley Energy and hand them to a Ley Capacitor belonging to either the Consortium or the Priory to get the giant orange orb move towards the capacitor you handed the Ley Energy to.

Each Ley Energy can be only picked up by one player at a time and there are achievements for collecting of them and handing it to either the Consortium or the Priority Ley Capacitor. Since the June 2 patch they made it so the Ley Energy are player specific so you no longer need to compete with other players for them. 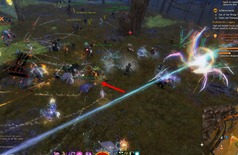 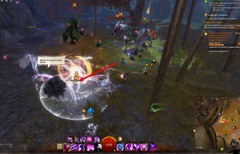 Usually this is just a two way tug of war between Priory/Consortium and the Inquest but when both Priory and Consortium pick the same location for the event there will be a three way tug of war.

These achievements are found under General –> Current events and won’t show up until you complete or partially complete them. 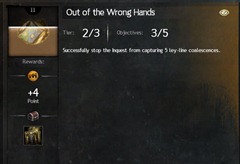 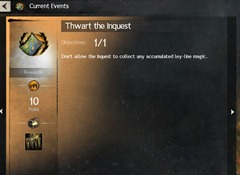 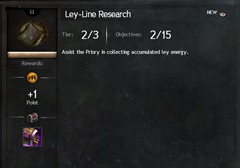 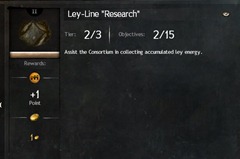