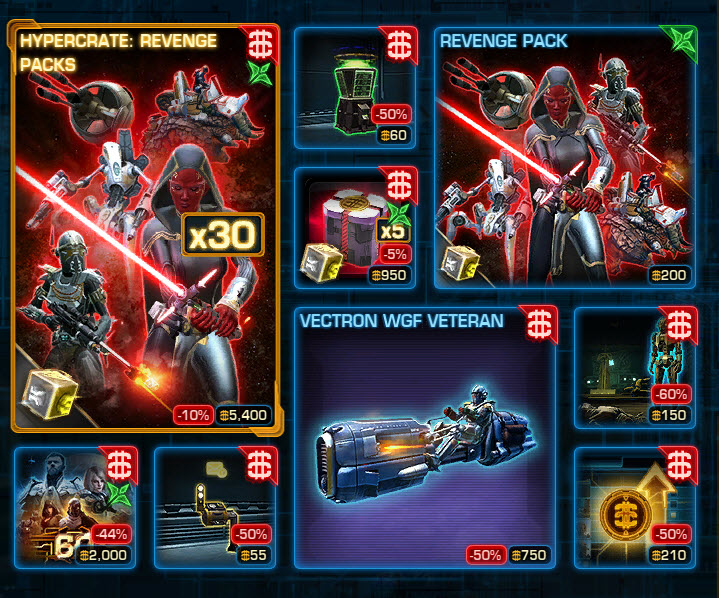 why is section x even a thing to be on sale? would a nonsub really buy access to a 4 1/2 year old instance?

Its not even worth going there for subs anymore. The only important thing is the WB, the dailies there are useless now.

You can get reputation from the dailies. The rep shop has an armor set that resembles an old Trooper L50 endgame armor and a schematic for a popular dye.

If you actually care about that. The only real reason to do it was to start the HK missions, but now that he’s been turned into just another companion there’s no point in even doing that.

The quest to recruit HK-51 is actually one of the best quests in the game, so it’s still worth it for players that haven’t completed it. Not sure what you mean “just another companion”. HK-51 is cool.

When they took away HK-51’s Assassinate skill he was no longer “cool”.

HK-55 is a MUCH better option. 51 cannot even tank at all, even in his tank stance, he is horrible. I agree the quest is a good one to do though, and if you are a companion hoarder like me, you pick up everyone, then you dump that whiny bitch Koth.

I can confirm HK-51’s tank stance is horrible. HK-55 is a wayyy better companion.

Wasn’t HK-55 a time limited offer, like Nico Okarr? Players who didn’t sub back then don’t get to rebuild HK-55 later in KotFE? That leaves them with HK-51.

Like Treek. As a matter of fact, Treek is useless as a tank or as a healer. Someone “upstairs” should do something about that. I mean, they went from being the go to comps to being useless, or nearly useless. Hey, at least they make the game interesting in a twisted sort of way…

there all the same and thier all useless LOL. Its pokemon shit thats what they want collect them all and do nothing with them /smh

If BW made all comps the same in 4.0, how is Treek or HK useless in any given role? They were the go to comps because they were OP and now all comps are OP.

Now all comps are OP… Except Treek and HK. HK as tank does not generate aggro, or rather as it was pointed out someone left the aggro dump in one of his moves, so basically you’re left with a bad dps. As a healer or dps he’s fine.

Treek as tank does not generate aggro, so read above. As healer, her heals are very slow, aggravated by the fact that she does not have good self heals, (only two of her heals heal herself) so basically if she gets aggro in a difficult fight she’s probably a goner. As a dps I found no problems whatsoever with her.

This does not show in normal, everyday playing. Only when you get to more difficult stuff, like soloing Star Fortresses or the Eternal Championship. Give it a try and see for yourself. It’s not impossible to use them, but there are better options.

TBH I didn’t pay much attention to comps’ attacks. I believed that after 4.0 all rifle wielding tanks use the same ones, all pistol tanks their respective ones, all force users theirs and so on. Which is mostly true but not entirely. I stand corrected. So HK and Treek are bugged. Good to know. I deactivated auto casting of Emergency Protocols on my HK. I don’t have Treek so that’s one thing less to worry about.

hk is just that another comp like all the rest waste to time to bother with him took assinate away and his uniqueness.

ok if im wrong go use assinate then. There is no difference between him and the ship janitor now there all the same

I really couldn’t care less about ONE ability of ONE companion.

No, most of that quest is just tedious searching.

And the only unique thing left about him is his personality, which doesn’t at all make up for the fun you used to have with his assassinate ability, or any of the rest of the abilities he had that made him ACTUALLY fun and interesting.

I guess I’m just grateful that I got to roll with him when he was good.

The Theoretika mission is tedious searching? I completely disagree. In fact, I would rather have a mission where I have to do many things and at least get a sense of accomplisment, than cakewalk through 16 chapters of idiotic mobs, annoying “boss” fights and utter nonsense “choices that matter”, in a story that could have been great if it was accompanied by a much much better gameplay.

How was it fun to use a companion and wait till he casts his Assassinate ability? That is how you define fun? But now it isn’t? Alright…

The Theoretika mission was the one part of his quest I could forgive ( except for the jumping bits, but jumping in this game has always been awful ) to be honest. I can’t admit that finishing it wasn’t a great feeling.

As for his assassinate – yeah, kind of? It made him stand out from the others. It’s not everything, but it was something, even if just a tiny mechanic, that made HK that much more special when you did get him.

As for idiotic mobs and annoying boss fights, that’s kind of the whole entire game, isn’t it? No arguments from me on that account.

HK is not just cool, he is the coolest and best companion in the game.

Excuse me? One of the best quests in the game? I agree on the part where you wander around that derelict ship but scanning the dirty soil of like half a dozen planets millimeter by millimeter for hours is just plain ridiculous.

I’ve visited SecX hundreds of times. I’ve done the quest for HK once.

All Dailies are basically useless now, you get more money and more Crystals doing Heroics (except for a few Dailies that have Radiant crystals, but that’s almost ridiculous).

The cool thing about SX is going there and doing the Heroic. Finishing the Commander off can be a challenge, you have to know how to interrupt him and finish him off quickly… Solo that is, with a group it’s real easy.

I don’t think you can do the heroic 4 solo. Theres a door in there that takes two people to open…

No, they changed that. It used to take 4 people, you could do it with 3, though I never learned how to do that. But now you can just go in and throw the grenade or whatever, you don’t even have to kill the Commander, just throw it and run away or jump to die. Of course, first you have to get to the Commander, and the fights to get there are tough as well…

Killing the commander solo is ridiculous. I tried on my sin tank but he healed himself for more than me and Khem could damage him.

I’ve only done it with dps. And yes, it’s a patience trial. Like I said above, you absolutely MUST interrupt him, or he’ll heal almost full. But hey, it’s as close to a real challenge as anything in this post 4.0 TOR world…

This is the only way FTP can get access to the HK-51 quest. Also, The Dread War is the Conquest for the week so I am guessing that’s why Section X access is on sale.

Wait, so if I’m a subscriber I have access to the HK-51 quest to get him as a companion already, without having to pay CC?

I think that’s rigth, the quest in the section-X area is the only thing prefs/f2p’s need to buy with CC to get there, so as a sub, u can get him completely free, but the quest takes time tough, but there are guides ofc.

Although the quest story itself is pretty cool, about halfway through it you’ll be wishing you just paid for him as you search for part after part using that terrible seeker droid.

hk isnt worth it now hes just another pokemon cookie cutter comp he used to be really cool before they decided to make all comps the same. That quest is a major pain in the ass from what i remember boring as hell a route canal was more exciting

A route canal??? A prostate exam is more fun than that quest… And NO, I’m not gay, so yeah it’s something I would NOT be looking forward to… Although that reminds I’m at that age when it starts making sense to get one… lol

It’s basically a trophy comp more then anything. Just something to say “yea, I went through the headache and got this sob” even tho he’s pretty lame now since they gutted his animations that made him awesome

No, you still need to do the quest at least once. you can then CC or in-game creds buy unlock for each alt toon you have.

well if you dont have hk-51 then yeah you need to do the quest first, after you aquired hk you can then use CC or 1 million credits to unlock him on lvl 1 characters it isnt account wide so you has to do it per character.
but you do lose acces to section x if your sub lapses

Who pays CC for an item like the mailbox, that costs 1 shit universal prefab mk-1?

How many of you are going to buy 50 more Hypercrates?

Not me. Sub ran out 4 days ago. I was never buying crates anyway. Always used my CC to unlock things in collections from the stuff I bought off the GTN after the prices went down.

No more crates of any type until they remove those ^&%&*^*&ing cubes.

what your inventory looks like when you buy crates. LOL!

I didn’t buy it, that’s not mine. I never bought one ..never will

They are adding bronze items back into the crates. The cubes still aren’t totally gone but it is a step in the right direction. Now you will get a bronze or a cube.

This is not a spam post, but is a request for help. Please go to this
gofundme page, read, and decide if you wish to assist or possibly signal
boost.