A guide to the 5 new datacrons added with Game Update 4.6.

Note: These are for the new Dark vs Light event and do not grant any stat bonus or individual achievements. They must be collected on the new DvL characters for the event achievement to count. 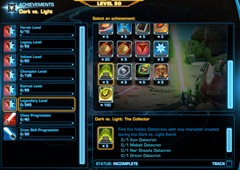 From the Spaceport, take the Taxi to Shadow Town and go near the SW corner of the map. 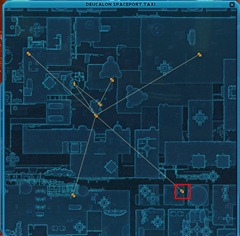 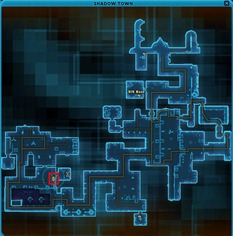 At the marked location, you will see a bunch of stacked crates. You want to jump on to to get up top where you where gain access to the Maintenance Tunnel area. 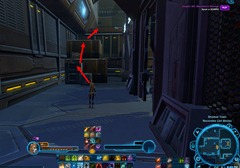 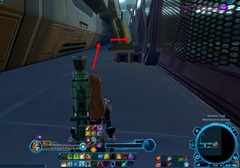 At an opening to the right you will find a little bridge leading to a central area with the datacron. 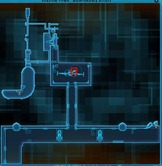 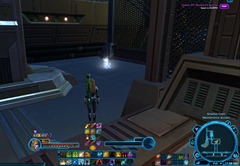 From Voss Spaceport, take the taxi to either The Gormak Lands or The Nightmare Lands and then enter the tunnel to Desolation Pass. 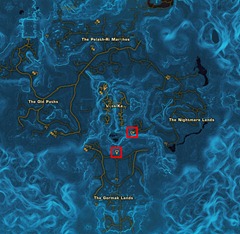 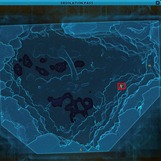 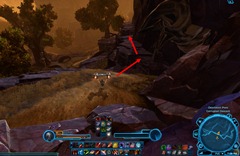 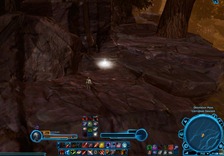 Imperial players can take a taxi directly to Aboro Mesa while Republic players need to travel east from Avesta Plantation to The Fingers and then east again to Aboro Mesa. 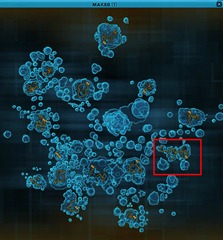 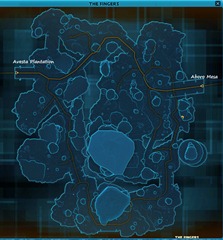 The datacron is located in the north area of Aboro Mesa, behind a house. 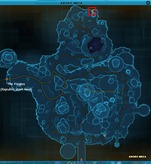 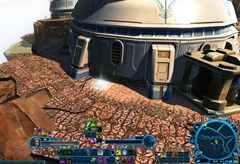 Imperial players can reach this probably the the fastest as the chasm with the elevator is right near the spaceport. Republic players will need to taxi to Republic Waystation first and then take the path on the right to loop over. 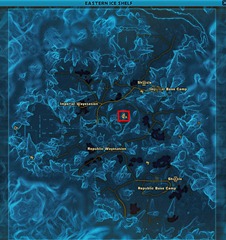 Instead of taking the elevator, you want to drop down on the ledge to the right and then run alongside it until you reach the end. 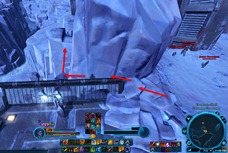 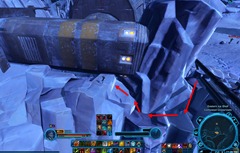 Then you need to make a jump from the end of the ledge onto the steel structure (a bit of tricky jump) to grab the datacron. 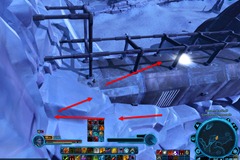 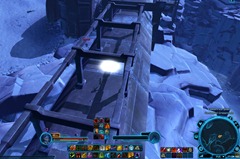 This is near the Imperial Base next to a crashed starship on a hilltop.

Special thanks to Jedipedia for the initial guide upon which this guide was created.

So, do they not even grant a codex entry?

Nope, I got nothing at all on regular chars

Do we have a visual on the vendor-purchased Million Dollar Datacron?

Well, I am bitterly disappointed.

Cheer up, at least BW is not asking us to hunt every single datacron AGAIN in a brand new toon 😉

suuuusssshh… Don’t give them any more “great” ideas…

Could have been worse. Could have asked us to find the two seeker droid armor sets with new characters.

OMFG!!! I didn’t remember that one… Oh that would be a real “blast from the past”, wouldn’t it???

Actually, that would be nice. More people running the H4s for Seeker and Binoc quest chains and all.

I am just happy that these are kinda easy and fast to get, all of them..
none like the fleet datacron, Rishi or those similar to them in how much time they consume to collect.

How do people find these so quickly?

someone play on PTS Closed 🙂

I really don’t see the point in this part of this “event”. Why are they making us find these? It’s not like there isnt enough to do to get to the highest tier.

“Making them grind out 8 new characters isn’t enough. Anyone have any ideas what else we can make them do?”
“We could make them find some useless Datacrons.”
“Excellent idea, Bob. Everyone needs one good idea per year. I will make sure you get that bonus this year.”

They’re not “making” you do this at all. And you only need these datacrons if you’re going for Legendary tier, which almost nobody with anything resembling a life should bother trying to do.

What a dog shit comment. “Nobody is making you do X” has been being used by phony assholes since UO. This “event” is a total shit show and these bullshit datacrons are fucking stupid.

I don’t really care why you’re mad at a video game, tho.

He’s mad at the people who make a video game because they have not developed it in the specific way that he chooses, yet he will still choose to subscribe to this game, even though he’s been complaining since the announcement of Chapters in 4.0

So someone is making you do it?

pal, go make your own video game, with gamble games and sluts

How about you go and fuck yourself.

yeah, because when you run out of logic you start to insult like a caveman, go on baldy, i’ll 1v1 you

How about you 1v1 my balls?

Whiney bitches don’t have balls. Why don’t you grow the fuck up and stop having an 3 year old style melt down over a fucking video game like the no life basement dweller you are. Also, tell your mom I’m sorry I talked her out of the abortion.

You should probably go suck whoever’s cock decided to add this bullshit in the first place. You think if you praise these dickbags on some website that they’ll let you suck their cocks or something? W/e, this “event” is for kiss ass pansy’s like you anyway.

The point is it is an odd thing to add into the game. It serves no purpose, every other aspect of this “event” is to get you to experience every aspect of the game. I could understand if it was tied to the deco. If you had to find them all to be able to buy that 1 mil credit deco, then it would serve a purpose.

These aren’t the easiest of datacrons to find, they could have been a lot easier. It looks like to me that they’re using this as it’s almost an accomplishment in itself. They don’t want just anybody claiming the top prize, that’s evident. I know many veterans that won’t be able to claim it.

I think this even is a response for those fans saying “too easy.”

This could also be since datacrons used to be a big part of the early game for min/max purpose, but now the important ones are part of collections. So, rather than having a bunch of people getting pissy about locating unclaimed datacrons they just threw in 5 new ones as a reminder for how the leveling experience used to be.

This is the ‘new content’ portion of the event :). See, it’s not all recycled old stuff!

is there no codex entries for them either?
you only mention that they dont grant stats or individual achievements.

Nothing. If a regular character gets one of them, there is a short cutscene and that’s it.

Well.. That sucks.. Good thing we only need to get Them once

No stat bonus? LOL. How about suck my balls?

Haha, oh man….
“In other words, there is no reason at all to get these datacrons on your regular characters.”

So these are fake datacrons, just for the event.
They could also be green teddy bears you are searching in the field.
Pretty sure the developer who had to do this doesn’t play the game, knows nothing about it and doesn’t give a fuck about it.
Absolutely no love was put into this event.

if they were “real” datacrons that gave 1 stat point each, would it affect anything at all?

this event is starting to be stupid even for achievement hunters

to be honest I still waiting for paazak pvp since 2011, so much casino and slavery but they don’t let us do anything

That would be extraordinary.

Hello,i have found something to i not fuly understand in Odesen Wilds,there are 2 datacron alike items,i show one,other one is near ship,but its important to you dont click to the shrine first,or it will become blocked,atleast one of them near ship,sugesting explore options,but be ware,if you move to from camp,it will autostart dialogue with guest of day and just be sure you check things around first, i end up reseting the chapter :/ ew …,Not sure if i pick them,or if it do have some meaning.

So the Locked datacron supoused to be in the Odessen wilds near 1246,-2 coordinates,hmm the images it did failed to load them,but i try different way.

Ps: sorry if i post it in wrong section.

So, why is it they will have a DARK vs light event, and have an achievement that can only be obtained if you create a LIGHT character?

Are these all new datacrons?

On the starting note, I would add that they don’t even give any Lore Codex.

If you don’t want to start the Makeb quest chain in order to unlock the speeder on Gravity Hook Seven (i.e. the starting mesa), (imp) use the heroic transport for [Heroic 2+] Weapons Test and then just walk there, it’s very quick.