Arenanet has released some story/lore leading up to the start of Living World Season 3. 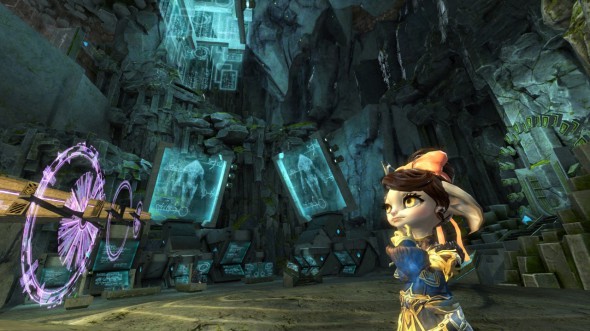 This is bliss! I have to admit, when the commander left with the others, I was a tiny bit nervous about staying here by myself, but what a dream this turned out to be! I haven’t slept in a week, and I don’t want to sleep for at least another two! Or three. Maybe four. (Note: Look into alternative to sleep.) There’s so much data here, this place should have been called Data Novus! (Note: Does lack of sleep make you smart and hilarious? I think so.) It feels like it’ll be almost impossible to go through it all by myself… But the last thing I want is some other nosy researcher horning in on my work. So many theories are swirling around in my brain; I know I’m on the verge of something big. I just need time to draw some solid conclusions.

One of the more remarkable things I discovered here is a replication (or maybe the original prototype?) of the ley-line map we found just outside of Tarir. The magical network of ley energy is alive! It goes this way, and then that way. One minute it’s here, and then the next it’s over there! I had no idea it was in constant flux. Although I’ve had a little contact with friends on the outside, I wouldn’t need their input to tell you definitively that the commander’s mission was successful! Mordremoth is no more! There was an intense light coming from that part of the jungle, and then one morning I woke up and it had dimmed, and the rest of the map was lit up like a Lunar New Year fireworks show!

I’m developing a system to track and log the flow of magic. I hope to find some sort of pattern. I mean, it can’t just be completely chaotic, can it? Or maybe it can… Maybe it has to be! But at the same time, maybe it can’t be! Both arguments make an equal amount of sense to me right now… (Note: Investigate impact of sleep deprivation on rational thought.)

I’ve observed that the egg chamber is definitely brighter than it was. Caithe told me she was going to check on the egg and make sure it was okay. (Note: Of course she is.) I have a hypothesis about her Wyld Hunt, but I’ll keep that to myself in case this journal ever gets away from me. (If it does and you’re reading it, Caithe: Hi, friend! You’re the greatest and you always make the best decisions!) (Commander, if you’re reading this: wink, wink.)

Okay, I just reread those last few sentences and it’s possible—though not very plausible—I’m cracking up. Maybe I could use someone to talk to… But not a real someone. They’d just slow me down or worse. Oh! I almost forgot about Scruffy! He’s not a real someone! I miss the big guy. I’ll have to formulate a new design for him… But do I have time to get sidetracked? No. I can’t. Not now at least. Anyway, I’m getting along just fine! Besides, I can always talk to my new friend, Plant! She’s a beautiful little fern who sprouted from one of the cracks in the floor of the dragon lab. She’s pretty cool, but quiet and green. Kinda like a shy Sylvari. (Note: Does the number of sleepless nights correlate to the amount of new flora friendships? Conclusion: Highly probable, but who cares? New friends!)

Wait, what was that? Hmmm…if I didn’t know better, I’d say it sounded like the gate powering up. Curious. Plant, keep an eye on my journal, I’ll be right back!

24 replies on “GW2 Notes from Rata Novus–Part One”

Kewl! Calling it now, that gate leads to new rats novud and will explain at least one of the new maps (I optimistically expect several)

So is taimi saying caithe is going back to the egg after mordy? We let her go AGAIN?!

Isn’t it pretty crazy to leave Taimi alone, without her golem, without food and water and with who knows what kind of creatures around?

That plant of hers already sounds ominous…

If that plant actually sticks around for a season or two I’ll be really, really impressed. Anet goes to extreme lengths to use many words without saying anything. Given that no details were given on Tiami’s research, no personal character development took place, no new character’s actually appeared and no new info on the dragon or Caithe were given, I’m left with the impression that that plant was created so there was actually something to talk about.

That said, if the plant received as much lime-light and development as o-tron I will be greatly entertained.

That what I was wondering aswell.

I can guess she had ration (but for how long) or maybe she is chopping down those roated chak from the mission we did?

Worried this could mean Primordus is next given how much data in HoT there was found in RN that proved the Asura really had it out for him. Was kind of hoping he’d be the last to be honest D:

Given some disappointing ends in the Rata Novus area, I can only see this leading in 3 directions:

3) The Rata Novus founded the Inquest, didn’t all die but are going to mess with the Ley-lines so much that’d we will wish they had -.-

Primordus doesnt corrupt, only kill and destroy. I hypothesized they work like ants. The big shot (dragon) is a king. He gives birth to champions, who in turn give birth to swarms. And he uses local flora and fauna as a blueprint, as evident in GW1. At the time, primo was solely underground, and all destroyers resembled kabutos, gravelling bugs and cavernous plants. Now they’re aboveground they also start to resemble the weaker wildlife like harpies, crabs and trolls.

Asurans tend to show near domination of dragon magics – and then get corrupted by beurocracy instead -.-

I doubt it would be primordius, he already has an advanced tunneling system, I don’t think he would bother with portals and magics

Well… its better then nothing. 2 vague story facts and an intro into sleep deprivation -.-

I will be honest…the comedy used in this made me laugh. I find it well written.

Commander?! What happened to Boss? I kinda liked Boss.

It was lame as fuck really. Glad they got rid of it.

But Commander is lamer – there is how many of those, like dozens? Also, I am not commanding jack. I didn’t tell those tools to go into the jungle and lolbomb everything randomly. The Pact failed, that’s not on me, I don’t want to be associated with that epic fail. I am running covert ops with 4 other people to clean up the mess they made. I am da freak’n BOSS dammit.

The difference between the word “Commander” and the word “Boss” is that Commander is a military title…it has weight behind it and meaning and it fits your role.

“Boss” as a word means the head of a company and usually is NOT related to “Leader”….there are quite huge differences…as in a Boss is see as a slave driver. That’s why at a job you want to be lead by a Leader not a Boss.

But am I really commanding the Pact? I have my own group and I am their… leader/boss/commander. If this was Predator I am Arnold Schwarzenegger and not whoever the commander is that send him to the jungle.

Let’s put it this way. Whatever you say to other NPC’s, they do. They follow you in battle. They make sacrifices for you based on your judgement and so on.

You are obviously close to your “subcommanders”…each in the past talking with their respective races to come to your aid.

So yes you really are commanding…but ANet did a very poor job of showcasing it properly.

Agreed. I don’t feel like I am a commander besides some NPCs calling me so.

she really needs her beauty sleep