Part Three of the Living World Season 3 prestory posted on the GW2 website. 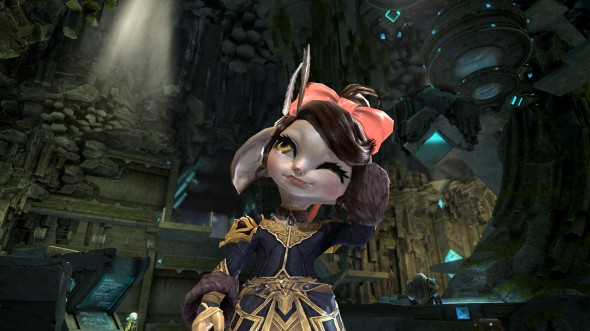 You know what, journal? These Rata Novans might have been onto something.

There’s a primal pleasantness I’m feeling about living underground. Being constantly surrounded by soil and sediment and geological history—it’s like Tyria itself is giving you a dirt hug from all angles!

Being born in Rata Sum, I only really knew about surface life (except for that one time I fell into a deep ditch), but I get it now. Primordus forced us above ground, and the Rata Novans said, “No.” I’d like to think if I were alive back then, I’d have made a similar stand (and then realized the chak problem ahead of time, naturally).

So now I carry on their work. I feel…obligated to them in a weird way. They knew running from the dragons wasn’t a permanent solution. We have to turn and face and vanquish. That was the brave philosophy they put forth (which is kind of ironic considering how living underground could be misconstrued as burying your head in the sand!). I owe it to them to finish what they started—and this time, it’s personal. Ha! I actually meant that, but then realized how cliché it is… But it’s apt! So very apt! I guess this is how the cliché started in the first place!

Anyway, Primordus is first on my list because the bulk of the research here is focused on that dragon, but I recently hit upon a few nuggets of information on the beast in the Crystal Desert. The Exalted and the Novans shared a lot of tech, and I guess some dragon data as well. They were as concerned with Kralkatorrik as we were with Primordus. That’s because they were constructed by the Forgotten. Now, the Forgotten were dedicated to Glint. And Glint was a former Kralkatorrik…um…chief baddy? Champion? Yes. A champion who went rogue and tried to protect all peoples from the dragons (my type of lady!). After her death, they went to great efforts to ensure the safety of her legacy. And you know what a big piece of that legacy is? The egg!

Wow, I gotta get ahold of myself. I bet that’s how Caithe’s logic worked when she took off with the egg in the first place! Okay, so maybe I can’t (or shouldn’t) physically get it here…but if there was some way to keep an eye on it… Hmmmm. This bears investigating.

Another gift from the Exalted is the ley map I mentioned earlier. Now that the fireworks show has slowed a little, I think I’ve noticed quite a bit of Mordremoth’s old energy sliding in one particular direction. I say “I think” because honestly the magic’s movement is still erratic enough that I can’t tell if it’s a pattern or not. Also, I don’t even know how reliable and accurate the map is. The evidence flowing in could be misleading… Once I get it dialed in, I think it might be time to craft a letter to the best dragon slayer I know. Hopefully, my research will do right by the Novans, and the commander and I will soon be able to turn and face and vanquish…

I bet the next expansion will be the crystal dessert! Ive been saying it since I saw Glints egg in the personal story! With the way things are going with the LWS3 around the corner, I think this is a good bet!

I’m hoping for this as well. I’m also hoping that when we beat the Branded it will open up routes to Elona and give us more goodies, support and who knows what when that time comes around. Me and some friends were talking about this a month back trying to figure out the location of the water dragon (long talk for over a year off and on) and someone said maybe near or around Cantha so go through Elona and make a base there after certain factors were taken care of like Palawa Joko and whatever else is down there.

I read somewhere , a reddit post I believe, that someone was speculating the airships would be heading to the crystal dessert (for obvoous reasons) crossing the unending ocean …. and they will be smashed down by the water dragon the way mordremoth did for the jungle. I’m so excited to see where the next expansion goes. Either way is good with me! Lol

Maybe but then again they’ll probably work on some sort of technology for the submarines though who knows. If they do the game right we literally can go back to Elona and Cantha to do stuff there. I know people say “Why should we do that? The stories ended in those areas…” which is complete nonsense. Palawa Joko is running rampant in Elona while something mysterious is going on in Cantha from what I remember. Personally I’m hoping for something extremely good for a fight against the Branded and am curious of how the Crystal Desert changed lol.

No, the Water Dragon is out of the question. Most probably it will be Kralk.

I don’t think you read my post clearly. It would be years off. YEARS off until we ever face the water dragon. The Branded are most likely next unless Anet swings a curve ball and we go after Primordus. Either way I’m fine with whatever unlike most of the whine asses that don’t get their way lol.

The water dragon will definitely be last or more likely we won’t even get to him at all. Anet has pretty much abandoned supporting and updating underwater combat. There haven’t been new water maps in years and the majority of the new skills don’t work under water. Zero balance for underwater skills/traits. They even stopped making underwater weapon skins.

In addition, it seems like the schedule is 2 years per dragon. This puts the deep sea dragon at around 2022. Who knows what will happen until then with the game. Maybe underwater combat will be balanced by then but I wouldn’t bet on it.

Remember that one of the few actual dragons in the original Guild Wars was Kuunavang, a dragon trapped in what used to be a temple in the middle of the sea. Also Cantha is officially the Empire of the Dragon, and is an island. Obviously this could mean a few things, but the deep sea dragon being a long serpent might make a lot of sense, and even if there is no connection going there to study the jade sea since turning part of the ocean solid could really help against the deep sea dragon.

In other words there are various reason why Cantha and the sea dragon could be connected, and somehow we end up fighting him on land. This also could move up fighting him a great deal. Though maybe no matter how much people want to see Cantha and Elona again they are kind of big and complicated so maybe that’s why we’ll see them last, but it would be a good plan. Water and earth dragons, Catha and Elona, Fire the underground filled with Dwarf towns and ruins of Asuran civilization. Then Ice is the far north, and we’re out of dragons and areas from the original GW at the same time.

Cool read. Nice that they introduce some lore for ppl who might know it well.

Well, GW2 seems to be making progress as a novella.

One can’t really nitpick less then a chapter of creative writing – which these logs are a few entries short of justifying.

A fee obligatory paragraphs of recap, a single new vague lore point and a decent self exploratory monologue.

I feel the commander was over mentioned though. Tiami isn’t a clingy team player and her development arcs have been over maturity, dealing with beurocracy that sucks and fighting for a social niche where her contributions are acknowledged and accepted. She tends to give information when she’s ready to or when said information is needed. The idea that’s she’s constantly considering tag teaming with the commander seems out of character for me. The line where she says she has a dragonslayer to call seemed sufficient to me – acknowledging the usefulness of the commander’s contribution in proceedings, and noting to summon him at a time he’d be useful.