A guide to the maids and house appearance change coupon added to Black Desert Online with the August 3 patch.

Maids are a new feature/convenience item available exclusively from the Pearl Shop. You can buy them for 1200 Pearls each, which is about $10-12 USD. There are two kinds of maids, storage and transaction. One will allow you buy//sell items via the marketplace from anywhere in the world while the other allow you to retrieve/store items in the storage in your current territory (i.e. Balenos, Serendia, Calpheon etc). In addition to the two kinds of maids, there are three different appearances for the maids: Chiara, Listi and Irene. 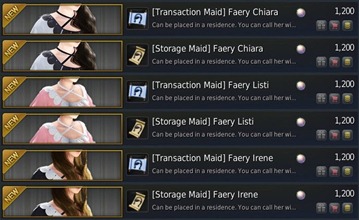 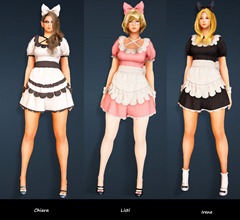 Once you purchased the maids in the Pearl Shop, you must go to your residence in any major city (Velia, Heidel, Calpheon, Altinova, and Valencia City only) and place them in your residence like you would place a piece of furniture. They will then pull out a broom and start walking around. 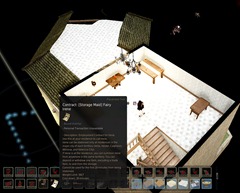 Once you put down a maid, you will see the new maid interface to the left of your screen. This interface shows you their residence and the cooldown left before you can use them. As you can see on the screenshot, both maids are still on cooldown. Once their cooldown ends, they will be in standby and you can click on either the storage or the marketplace button depending on which maid you purchased. This will open up the regular storage or marketplace interface. 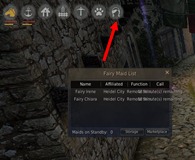 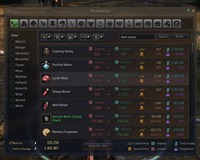 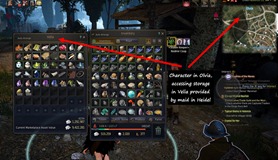 The Premium horse coupon cannot learn the following skills however. These skills are the skills that T8 horses can learn a “super” version of once they have the basic version of the skill so it could be reason why they are excluded.

Once you have purchased the coupon, put your horse into the stable and click on the change appearance button. 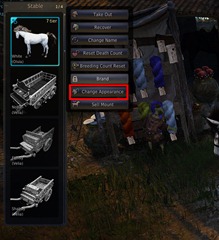 This will give you a selection of appearances you can apply to your horse. The first option you will see are the Special Appearances. Every horse will have the same 10 options and these appearances are exclusive to the exchange coupon.

Thank you so much for these guides!

Thanks for all the info, as always!

What is the impact on Breeding color score with the normal coupon?

I don’t think it does, can’t confirm though

Thank u so much! IS there ANY impact on color breeding as a result of using the appearance ticket? I DO think it effects the sellling price of the horse on the market place too. I checked to see and it said my T7 would sell for 35,000,000. BUT, i didnt check right before buying the ticket. – however, i’m guessing it does.

Maids in the same house share a cooldown. I have 2 maids and when using either of them, the CD is in effect for both. I haven’t yet tried to move them to a different house to see if the CD is separated. I plan to try it today to see what happens…

When you place them in a house. They have a 20 min cd before been able to use them.

so if you moved them and place them in another house, wait 20 min again before been able to use them.

so i can’t place the maid into my residence in port epheria? that makes the maid pretty useless in my eyes

Can i revert back to the horse’s original skin if i use appearance change coupon? For example i have 2 coupons the first i used for other skin because i cant pick the same skin, then after that i used the second one to choose my original horse skin, is it possible? Reason is i really love the skin but i wanna try to get the skill cos my horse already 30, TIA

Is there any limit on how many maids you can have?