GW2 World vs World Skirmishes will be arriving on Sept 9. 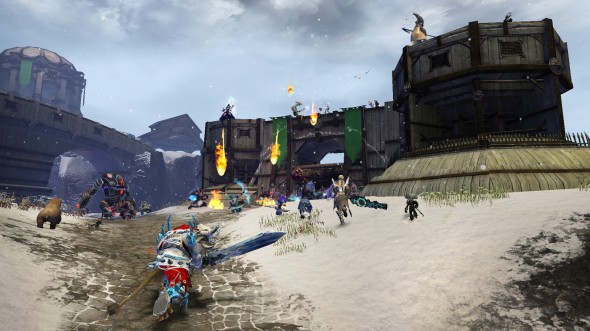 In our very first World vs. World development poll, we asked the community if we should prioritize quality of life or scoring improvements. Scoring won that poll, and since then, the team has been hard at work bringing the first phase of improvements to fruition. We’re happy to announce that Phase 1 of Skirmishes will be activated on September 9!

What You Can Expect from Skirmishes

Matches are still a week long, but have been split into 2-hour time slices that we are calling Skirmishes. During a skirmish, players will earn War Score normally as they always have, but War Score is now being used to determine the winner of each skirmish. When each 2-hour skirmish ends, War Score is reset, but actual map state and objective status remains unchanged.

Victory Points are used to determine the match victor.

Skirmishes will keep the winning and losing scores closer together, allowing the losing worlds a better fighting chance. Skirmishes should also help lessen the severity of runaway matches caused by off-hour coverage.

Skirmishes will be activated for both EU and NA when the EU reset happens on Friday, September 9, at 11:00 AM Pacific Time (UTC-7). We cannot turn on Skirmishes separately for EU and NA, so this will result in the last few hours of the NA matchup using the new scoring system.

We’ll be releasing WvW scoring features in smaller pieces so we can ensure the systems are stable and working as intended before we add additional features. If everything goes smoothly once skirmishes are activated, the next update will give upgraded objectives more War Score based on their upgrade level (secured, reinforced, or fortified). Once that’s in, we’ll be monitoring skirmishes and your feedback to decide what to work on next.

Thank you for your continued feedback and support. We’ll see you in the Mists this Friday!

just to be sure, they are implementing a series of 2 hours long matches inside the wvw?
i mean, every 2 hours the score “restart” itself and you have to capture everything again? like Edge of the mist?

No. Map state is not changed at the 2hr mark. What it means is that every 2 hours, there are only 6 ‘real’ points available. Whichever world had the most war score over that 2 hour period, gets 3 points. With second highest and third highest getting 2 and 1, respectively. Then war score is set to zero to start the next 2hr period. The weekly victor will be decided by points, not war score directly.

aw ok, that’s way more clear.
In my opinion then this won’t change that much but lets wait and see

Agreed, actually. I didn’t want to mix my thoughts in with the explanation, but I think it’s a terrible change. The stated goal was to prevent score run-aways. If anything, it’ll do the opposite. Just because you use smaller numbers doesn’t make the difference smaller. The victor of a skirmish is getting 3 times the points of the loser. That’s… ridiculous. There’s never been a period in my tier that the world ahead was gaining more than 3 times the world behind.

On theory it should make a difference. If you get roflstomped during a 4 hour period (like totally outcapped and destroyed) the score will only be 6-2. In other words the score difference is not as huge and if you pull your shit together in the next hours you can catch up. I am not sure if it will work in practice though. Whoever is better is just gonna keep winning.

Right. But if you have a situation where you have a server with no/poor coverage for certain time slots, but kicks ass during prime time and others, the scores will be closer, since they don’t have to make up X amount of war score, they just have to have more war score in Y amount of time than the leader. I will be very curious as how this affects blowout skirmishes though. If you know you’re going to lose a skirmish big time, do you just start playing for karma? Do you just leave? Do you play for second? This is particularly interesting for players in off hours who like to contribute, by capping a camp or tower, or holding a keep, but may not feel like they are contributing at all, if their war score contribution resets at the end of a loss.

Losers deserve to lose. They shouldn’t have their hands held.

Problem is that the winning server is often decided simple by who has an unopposed night crew. To me they should just adjust score by active population so a server with 20 ppl captures an entire enemy map when no one else is on gets less points than if the same server captured an entire enemy map opposed by 20 people.

Would you rather have captured everything in first two hour and wait the rest of the week for reset, i had many friends who would come for wvw every night only to find out everything is already theirs and log off

bring back old servers before merging them, this new system is really bad
system that pairing them sucks major balls

To clarify, servers are not merged, only linked. In other words, linked servers contribute their server populations towards a common team (red, green or blue).

ArenaNet have stated (was a few months ago now), currently the linking is done manually, however they are (or would like to, unsure which now) have it automated so the WvW teams balancing is more responsive to server population / WvW participation changes.

Agree with others. This will alleviate coverage issues in matches where
there is a strong server with weak coverage or no coverage gaps. But
in a lopsided match, with a strong server versus a weaker server or
servers, you’ll have a bigger difference percentage-wise in match
scores. Think of it this way, it doesn’t matter if you win by a 10 war
score or 1000 war score, you only get 3 points for that skirmish. So
when another server has no coverage, they can take that loss, but still
come back the next skirmish and win a sqeuaker and be tied with the
victor.