Arenanet is resuming the production on legendary weapons with a new streamlined process. 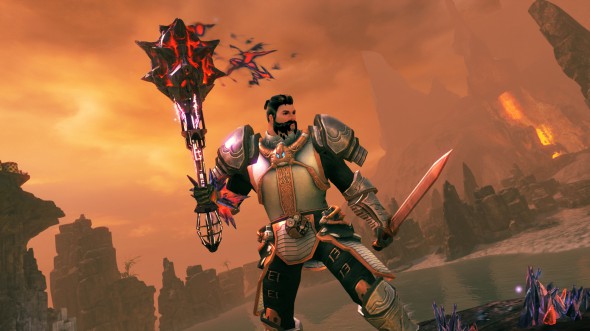 Hey, everyone! Matt Pennebaker here, with Mike O’Brien joining me, to talk about the new legendary weapon that came out today, why we suspended them in the first place, and the decision to move forward with them in this direction.

It was a tough decision to suspend work on legendary weapons. We did it because we wanted to put all our energy into creating new content for the game. The old legendary journeys took months to design, write, implement, and test, and they were one of a set of things that was keeping us busy on something other than creating content for everyone.

But even after suspending work on them, the discussion about legendary weapons never stopped on our side. Some players viewed “suspended indefinitely” as code words for “canceled,” but for us, it was more of a time-out while we worked to find a different solution. We wanted to find a way to deliver legendaries without hurting content development to do it. And that led us to this new method of obtaining legendary weapons going forward.

Let’s be straight that the new system lacks a lot of the story and lore of the old legendary journeys. But legendary journeys didn’t need to be that complicated. They were a solution to a simple problem: it was impossible to work toward a precursor. You either had one or you didn’t, and only a lucky roll (or a ton of gold) could get you there. The system of legendary journeys we created to overcome this was very deep and immersive, but they were also very time consuming to make. So we set out to make an alternative method of obtaining a precursor with the following objectives:

With these objectives, we created a new, streamlined system that allowed us to deliver the new legendary Eureka with the second episode of Living World Season 3, Rising Flames, and will allow us to continue delivering new weapons until we complete the set.

For those of you who haven’t seen the new system, here’s a brief rundown of how it works:

Thank you for your patience with us while we worked on this issue and for your continued support of Guild Wars 2. On a personal note, it’s been very exciting to be working on legendary weapons again, and when you see what our artists have in store, I think you’ll be excited too.

What sword is that?

What’s that in the air? A bird? A plane?

What’s that pant he is wearing?

Nice hammer, though I’ll skip the usual fortress of solitude monologue and state any GW2 announcement that isn’t patch notes should be considered bull until said statement is overwritten by a newer, different stated opinion on the same issue -.-

its not a hammer , its a mace.

what underwear is he wearing? Who cut’s his hair? Who is his girlfriend?

So the process for crafting the new Legendary Mace Precursor is totally different to the existing methods? Or did all of the Precursor collections get a similar revamp?

So now that the newer ones are “easier” to implement, we still have 3 different ways to get specific legendaries instead of 1, how long until they switch them all over to the new system so that we don’t have to hunt down wiki entries?

LOL Was that a serious question? Why on earth would they do that?
I loved the journeys – except collection2 – and I’m a bit sad, that the new ones won’t have similar story to them (Nevermore and Chuka&Champawat). But I’ll just accept that from now on the “journey” will be simplified.

I wonder if they’ll ever make a weapon that’s not red, they should seriously consider letting people dye weapons like they did in gw1.

I agree letting people dye their LEGENDARY weapons…but as far as colors go i think u are kidding when implying most weapons are red. The only thing “red” is the last collection from BL.

Other then that we have blue….green…black..white etc colored weapons in the game. Legendaries barely have red in them. The new shortbow has…this one has…but others? the axe is blue…the pistols are “something”..the old pistols are purple..sunrise is bright..sunsent is mostly dark with red effects…etc etc.

The whole “red > everything else” is in your mind honestly.

Again..legendary weapons imo should be dyable and should be part of the beauty and reward of getting a legendary…considering they have no extra stats compared to everything else and let’s be honest “selectable stats” usually turns into “1 good stat”

At least half of them look red to me, the designers have a thing for red flames. I’m especially ticked off about Chuka and Champawat being red, call me crazy but it seems like a tiger themed bow should be orange and black NOT red. Letting us dye weapons would solve that problem though.

Dyeing bifrost… awkward. Same for the GSs or Astralaria or Frostfang or Meteo.. or… basically all of them. Nevermore dyed with pink ? /shiver

And as for weapons… There are hardly any green-themed swords ( chinese new year skins and perhaps the crystalline blade) in the game but dozens of reddish, purple or gold skins. Just

Aside Astralaria and Nevermore, rest is not really to be considered legendary,.. The design is poor compared to the Tyria legends (included troll ones)

Nevermore looks like a black lion skin….moreso then others.

Besides nevermore and astralia..you mean Chupa or whatever bow? Because u limited everything to 1 comparison :))

Personally for me the least legendary of all remains Nevermore…it’s a tree branch with a crow on it..that’s it….not only that but it fits only the druid theme not any other class that uses staffs..so it limits you even more from that pov. Just a terrible skin all in all

Nevermore actually IS a legendary in the sense it has direct ties back to Guild Wars. The raven staff was a running joke in the game so Nevermore was created as an homage to that. Personally I really like Nevermore.

I don’t care if it IS or ISN’T related to GW…i am not talking about it’s “lore”..i am talking about how it looks. It looks lame as fuck compared to the others.

Honestly I love Nevermore. Just because you don’t like it doesn’t mean that there aren’t people who do like it and enjoy the weapon. If you don’t like it, don’t craft it. Not really sure why you’re complaining about it honestly. There are two options for a legendary staff, don’t like one? Make the other one. Besides you can reskin it if you want a legendary but you don’t like the skin.

Oh yes ofc, there’s always the crazy strange niche audiance. Some people enjoy and actually think of PvP as being competitive. Everything has it’s adorable niche.

I’m with N/A. if you don’t like the Legendary skin you can just ignore it.

I mean I don’t much care for Quip and Moot, but there are those who like the novelty aspect of those weapons.

And hell, Nevermore has RAVENS. I love those birds, they’re cool. Heck, I based a character off mine (a guardian) off a Raven theme, which is why I went and made it. It felt worth it, and I love its little intricacies: its more then just a branch with a raven on it.

90% of the LFG groups are constantly empty but ok.
Yes…this game has created too many niches and doesn’t satisfy any of them. That’s what happens when u try to do more things then u can handle.

Guess I’m my own niche. And I’m fine with that. And if I get tired with the game I just… play another game.

smell like a gold-sink strategy. People had been saving and awaited next legendaries. So by having declared indefinite suspension of legendaries, people, now without their original purpose, thus either spent their money on existing legendaries or something else. Now that ANET achieved a specific goal of liquid money level, obviously makes sense to resume legs to make people keep on spending.

Seems a sensible solution to me. Put the grind into existing content rather than waste obviously limited resources creating new grinds.

That said, I still don’t see the point. They’re some of the ugliest looking items in the game and I’d rather create multiple ascendeds with sigils appropriate for their stats.