A guide to all the achievements for the Rising Flames story episode (Living World Season 3 Episode 2). 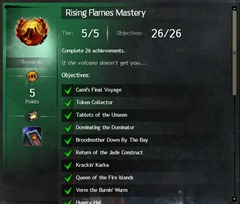 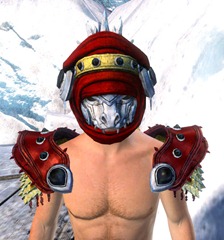 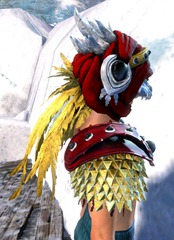 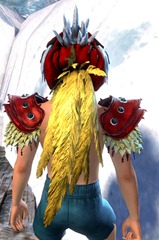 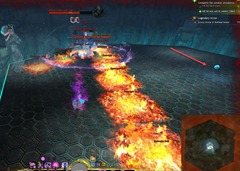 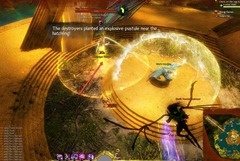 Ember Bay has a bunch of events chains that are happening in various parts of the map. Each event chain will start with a preevent and then usually end with a boss fight that also grant you achievements. 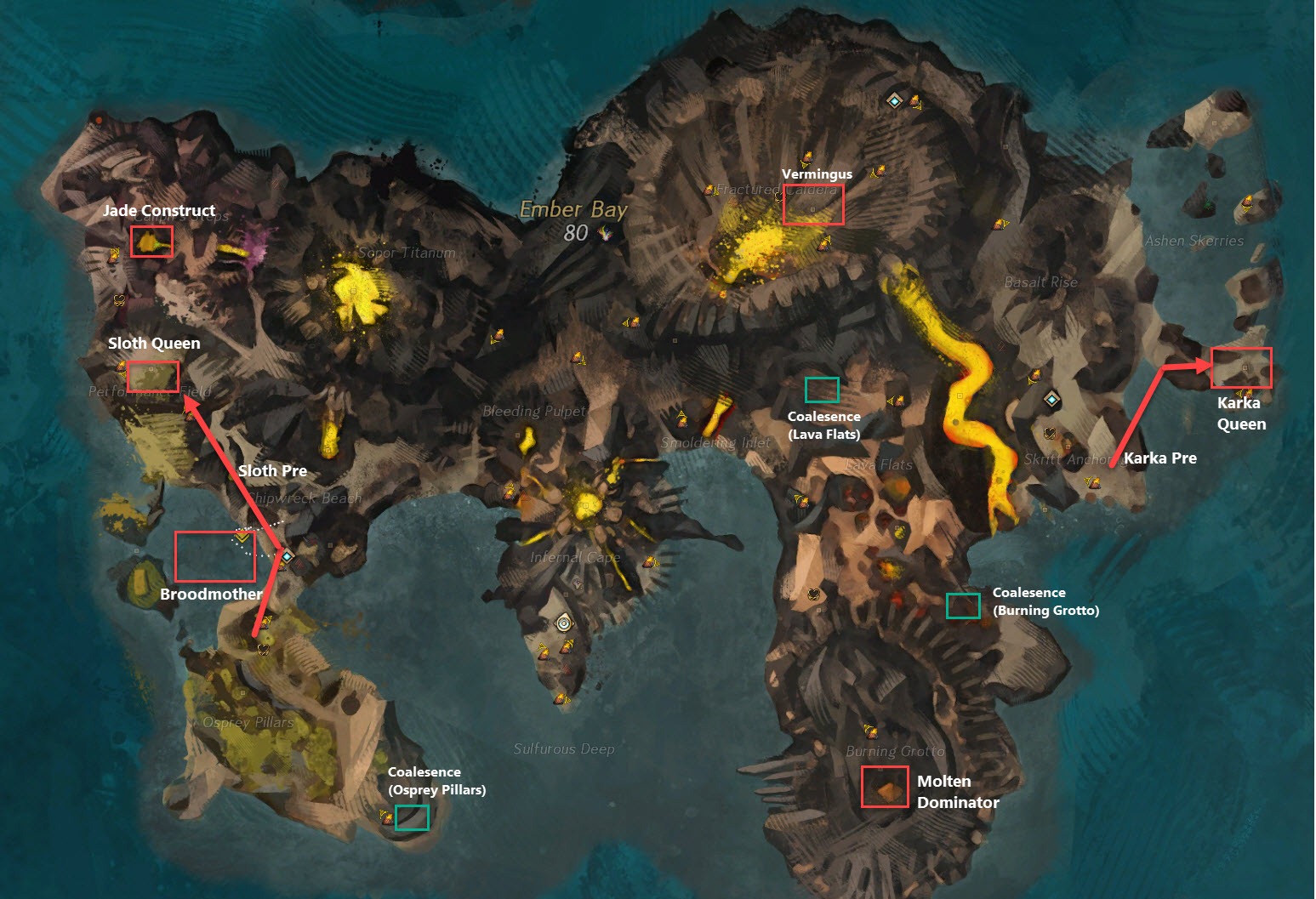 Broodmother Down By The Bay – 3 AP

Queen of the Fire Islands – 3 AP

Return of the Jade Construct – 3 AP 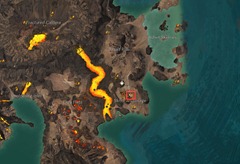 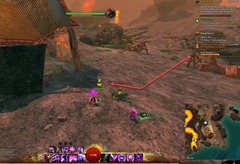 Complete the 5 hearts around Ember Bay 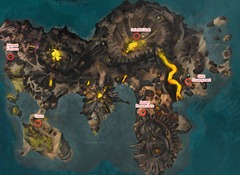 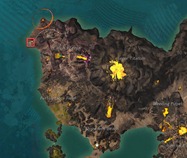 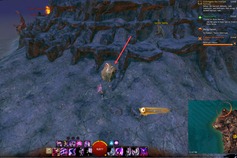 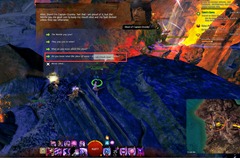 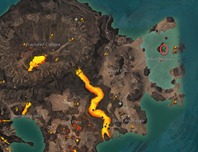 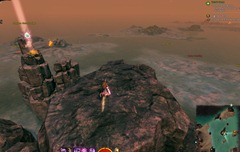 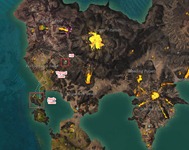 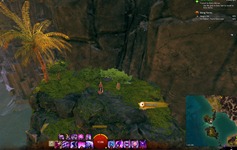 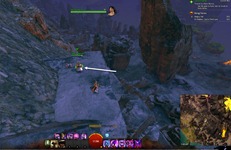 You don’t actually have to give Skrilla any gold. 3 times 1 copper got me the achievement

Me too! I only spent 3 copper.. skritts have enough shinies already XD

I think the text is misleading. Whatever you click it will give her 1 gold.

I actually clicked silver 3 times and got the achie, not sure how much money it took from me though.

I don’t think this works anymore. I just gave her 3 copper and it didn’t give me the achi. Also, now it does mention you need to give her 3 gold.

So..in order to “repeat” the instance for “I’m rubber; You’re destroyer” I have to restart the instance..if you finish it you need to do the WHOLE episode from 0..so to repeat just THAT particular mission, i have to intentionally d/c before the end of the mission and get back ingame?

Once you’ve completed the episode the first time, you can reactivate it for achievements and go to any of the instances. There’s no need to re-do the entire episode from the beginning. Just go to the start point under Tarir with Rising Flames selected in your story journal.

I just did that..but there’s no star at the tarir event..the only event star i get is at the start of the whole thing even tho i fully finished everything.

That’s because there is a bug with the game counting you actually finished the story.
https://www.reddit.com/r/Guildwars2/comments/53wsgm/completionist_issue_with_rising_flames/

This seems to have been fixed now. There’s a purple star for me at the Tarir Underground section before the Egg Room.

Didn’t get credit for “Maintain Aurene’s Shield”. It was on a guardian character. Somewhat buggy at the beginning as I skipped the cutscene and began fighting some destroyers before moving to the center of the dias and having the Exalted only then instruct us to defend the shield.

for Collecting Coalescence, you’ll still receive achievement point even if you fail the defense event

The ‘Patron’ achievement is (now?) under the Tradesman tab in the achievements panel.

hi,
i have finish the Story and all archivement, but i dont have the yellow star for “Master Achievment Reward” someone knows why?
I have not only the Tradesman – > Patron achivement – do i really need them for the master achivement?

It is bugged right now and requires that Patron achievement. You can wait for a hotfix though rather than spending 1k gold.

Unluckily they just fixed the Hungry Hal bug (did it just in time :P) with latest patch.

I’ve just tried this the ‘normal/nerfed’ way and it’s already doing my head in. Trees also don’t seem to respawn apples that quickly.

It now only requires 23 individual achievements to complete.

Since when does Dulfy endorse exploits? :/

There is a secret achievement on reddit. You have to hand in 7 pieces of ship thingy to the ghost. You can hand only one per day. It rewards with 10k karma and 3AP.
https://www.reddit.com/r/Guildwars2/comments/54ic8x/new_hidden_achievement_in_ember_bay_spoilers/

The apple one is just pathetic. Way to go Anet for GRIND.

It’s actually mocking other MMOs’ fetch quests. ANet hate things like this, and it’s a one-off, just for a laugh.

Yeah Hilarious. It’s so funny that they also do fetch quests under the guise of “collections”……

Can i replay the dragon vigil to try and get the achievements there, or must i redo the whole episode?

Is the trick for hungry hal still do able at this time?

Do you only get one apple a day from each tree? Or does it take like an hour, few hours, several hours for the fruit to come back?

There’s an error. In the “Skrilla’s Benefactor” achievement, it can only be acomplished with gold donations, copper won’t work.

Anyone know if you need to collect 7 pieces for ‘The Friendly Ghost’ and hand them in at the same time? I’ve been collecting them for 4-5days and just handing them in immediately so I hope I don’t have to start over….

for the im rubber ur destroyer. just dont care about the destroyer of hope and use bomb on minion. shield always regen u cant fail