A guide to the new current events added with October 4 GW2 patch.

There are two separate current events/achievements going on right now, one involving the rifts by Gillscale Pond and the other involves the Sad Anomaly. Do not mix them up!

1. Go to [&BM8AAAA=] Gillscale Pond in Fields of Ruin. Look for a Class I Magic Rift around the pond and jump through it, it should port you directly above the pond and you drop down underwater. 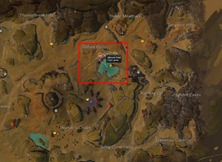 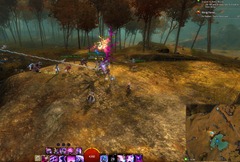 2. Now go to the bottom of the pond and you should see a ???, interact with it and pick it up. It will become a Mysterious Device in your inventory. 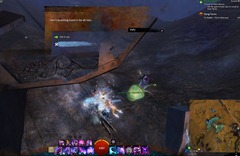 3. Once you have the Mysterious Device, talk to a NPC called Auris Weirdbringer (Charr) that can be found around the pond (he moves around so just run around the pond until you see him). He will say wait a minute, so you wait for him until he teleport you. This will put a Class I Rift Stabilizer in your inventory. 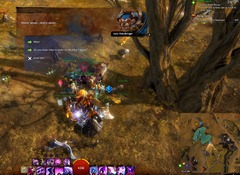 4. Now double click the Class I device in you inventory and go near any of the Class I Magic Rifts earlier to click #1 button (Activate Stabilizer) , the #1 button will change into numbers. Different number port you into different locations when you jump into the rift. If you don’t see numbers but instead circles, spirals, and squares, change them all to spiral the then rift will stabilize, allowing you to see numbers on the #1 button.

5. Jump through the rift each time with a different number on your device. Go through all 13 locations in the rift and it will break the device. You don’t have to do in order, just need to visit all 13 locations

6. Once your device is broken, find Auris Weirdbringer again and talk to him. He will give you a Class II Device.

7. This class II device functions similar to the class I but now you have two numbers when you activate it near a Magic Rift. Some numbers combinations does nothing, others port you to different locations. There is a very small chance that activating the device can turn you into a hostile player that can be attacked by others. 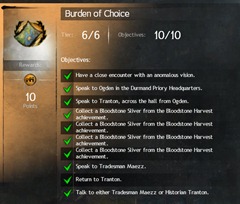 1. You will see a sad anomaly randomly on your screen, this is a random client side spawn that can appear anywhere, anytime. The sad anomaly only appear for a few seconds so you need to be quick. Interacting with it give you a new set of achievement called Burden of Choice. This is unrelated to the Rifts in Gillscale Pond, simply a new achievement they put in with the randomly appearing sad anomaly that was spotted over a month ago. The Anomaly is not clickable and looks semi transparent.

2. Talk to Ogden in Durmand Priory Headquarters in Lornar’s Pass – [&BOkAAAA=]. Go to the back of the Durmand Priory Hall and enter the instance. You will find Oden in one of the rooms.

3. Speak to Tranton, across the hall from Ogden 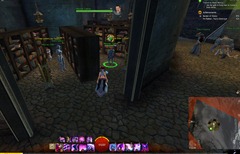 4. Collect a Bloodstone Sliver from the Bloodstone Harvest Achievement. If you already done the previous Current Event stuff, you can skip this part as it is already completed for you.

5. Speak to Tradesman Maezz in Lion’s Arch. You can buy some Snake Oil from him if you like. 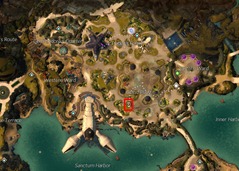 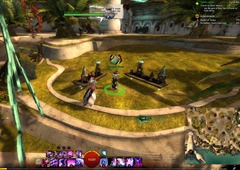