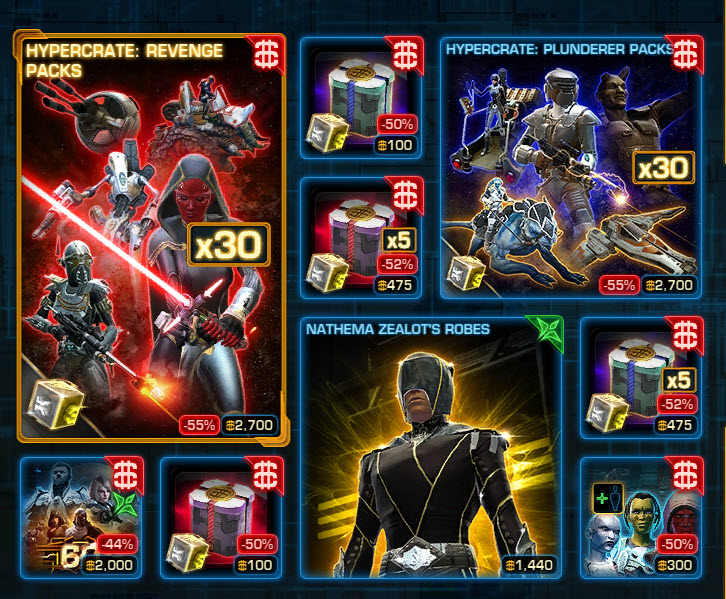 bought a hypercrate. about 32 grand chance cubes, multiple pets and decorations, prob 2 whole duststorm and wasteland sets, and enough dyes and crystals to last til game is cancelled. someone got a vented lightsaber i can buy lol? 🙁

Wait a few days and then search GTN, there will be at least 5-7 offers, lowering each other till I think about 30 mil. At least I`ll be hunting for that price and then I`ll take it. Missing only this one too =(

so no scavenger pack? man hope that they will at least sells it next week

The current pack only came out two weeks ago. Scavenger’s probably coming in November.

Funny thing is though, Scavenger items are dropping from Chance Cubes. Got a Frontier Hunter Lightsaber from a Chance Cube from the Manipulator Packs and I’ve seen the (ugly) Mystic Hazel crystal on the GTN.

I heard about that happening with decorations, but I didn’t know it was the case with other items.

I don’t have any screenshots on hand, but I must say the Lightsaber is very underwhelming, it’s a recycled activation noise (I’m not sure where from, I want to say Unstable Arbiter’s but I could be wrong)

The stripper hologram is a collectors edition exclusive item – it won’t be in any packs.

You mean the “exclusive ce item” that everyone can buy now for under $5 instead of $200 or whatever it was on swtor.com along with all the other ce items?
So exclusive isn’t it?
My Malgus statue is unopened in the closet. Just sayin’

I got the vip band for meager million credits on the fleet instead of the CE.

also yellow black crystal right? with CM ones all over it’s redundant.

The VIP band is included in the Digital Deluxe version as well.
What’s missing compared to CE is the pet, the crystals and access to the vendor

I’m well aware. My point was that originally they said the items that are now in this “digital deluxe” edition were exclusive to the ce. The items even have ce in the name. ce holodancer, ce flaregun etc. And its not the only thing theyve changed their mind on or recolored and called different. If they decide the holodancer will help sell packs Itll be in one without an eyebat

All items are of platinum rarity. Would love to see the reactions….

correct me if i am wrong but if ALL the items were platinum rarity, then there would not be a varying drop rate, every item would have an equal chance to drop and you’d be guaranteed a platinum item. the only issue with that is, they would be next to near worthless since they have an equal chance of dropping. In conclusion the reactions would be mostly positive since everything is equally obtainable but there would be annoyance that they aren’t exactly worth anything until the pack becomes unavailable.

Note that this equation excludes chance cubes. even if it did, they would be the only items of bronze rarity and you would still have a high chance of acquiring a fair amount of Platinum items if you bought a hypercrate

If we ignore chance cubes, then the scenario becomes quite different indeed as it wouldn’t matter what rarity items had as long as they had the same one. While this could be annoying in is own way (for the reasons you mentioned), it’s not as annoying as it would be if chance cubes are still in the packs, which was what I had in mind.

For fun, let’s assume chance cubes (bronze rarity) are included in the equation, which IIRC still drop stuff from all packs. And that the drop rate for any platinum item is unchanged while the chance for bronze items is increased because Bioware are dicks with their CM packs sometimes. This would then lead to a situation where at least 9/10 items in the packs would be chance cubes, with very very few of those dropping the platinum items from this pack. Which in turn would lead to a ton of really really angry players.

Bioware would then name the pack “Elusive Stripper’s Pack”, which in truth would be at least bit a little bit amusing….

The Elusive Stripper. Sounds like a smugglers ship to me 🙂

Hopefully they are going to put the Battler Packs on sale soon. Since the GEMINI and Revenge Packs have horrible Chance Cube drops I’ll hold off on them. I was lucky enough to get an Unstable Arbiter Lightsaber from a Plunderer Supercrate, hopefully luck will strike twice and I can get a Defiant Vented Lightsaber from the Battler Packs. Wishful thinking but hey a man can dream right?! 😛

Good luck to you! I wont take chances and will buy Vented Saber from GTN when prices will drop.

that was my initial plan but it seems they have just gotten more expensive (or completely unavailable) on The Progentior. May the odds be ever in our favour eh? (oops wrong fandom 😛 )

Hey I`m on Progenitor too!

Last I saw there was 1 saber for 100 mil. Prices will melt down when offers will come. I`d still suggest you to wait at least 2-3 days when items will get to the GTN. Thats the best time to get something good.

here’s hoping! since Rebels made it canon that Cross-Guard sabers are the sabers used in the TOR era I’ve been hoping to get one

I bought plunderer hypecrate pack and got 30 cubes and one of them gave me Corellian Stardriver Spark….

I think you forget how shitty they’d look in the game, as all other armors do. Glitchy robe bottoms that get stuck on one side of your legs, hands cutting through the fabric as you run, etc. Not to mention the one on the left is already in the game (sort of).

Stil they could perfect these armors

Well BioWare have gotten somewhat better at including decent Jedi Robes in game, Exiled Knight, Loyal Adherent, Exiled Master and the Humble Hero (I think I named that right) to name a few. I know a lot of Anakin inspired toons use the Exiled Knight set. So there is hope that trend has the potential to continue.

Yeah these looks are already in-game, save the one gauntlet. Just need a few dyes. It’s just basic robe looks.

I think you forgot to mention that warzone and ops passes have been removed from the CM. I am fairly certain that just happened this week. Also black/black and white/white dyes are on sale but that happened yesterday I think.

What happened to the plunder should have at least mentioned wasn’t gonna be up all week when’s the last time they changed mid week more often same thing 2weeks BW fail to tell there players anything again unless. I missed something then my bad but game still going down the pooper