Chapter Four of the Tyrian Travels story featuring Vikki and Momo has been released.

At this year’s MomoCon, members of the narrative team hosted a panel on the fundamentals of narrative design for Guild Wars 2. With help from the audience, they created the basic concept for Vikki and her moa, Momo, who you can read more about in chapters one, two, and three of their story.

Twilight had fallen by the time we crossed the Krytan border, which nixed my plans to let Momo run around for a while. It also meant that we got all the way to Shaemoor before I realized something was slipping around in the trees behind us.

I hunkered down in the open road to feed Momo an apple, taking the opportunity to look around. When I didn’t see anything, I watched Momo instead—sure enough, after she’d demolished her snack she whistled and fluffed up nervously. Whatever was back there had stopped moving when we did.

I wanted to think we’d just gotten spooked by the holiday. Lion’s Arch is supposed to be where the spirit of King Oswald Thorn returns every year to haunt Kryta, but the rest of the kingdom was in the mood, too. We had passed scarecrows with rotting pumpkin heads along the roadside, seen people in bizarre costumes traipsing through the fields, and I’d even been handed a flier for a Halloween stage show. “Don’t touch any strange doors,” a tavernkeep warned me. “They might pop up anywhere.”

But there were plenty of things to be scared of in the Krytan countryside at any time of year. Like skelk. Or bandits. I hustled Momo along. 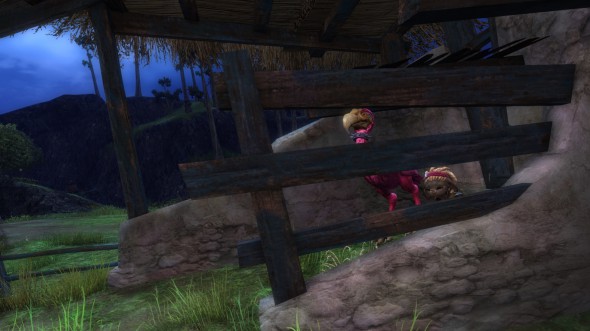 A scout pointed me toward the moa ranch. It was tiny, but their birds seemed to be in good spirits, and the hands were just putting them all into the pen when Momo and I arrived. Mepi, the ranch’s owner, stopped to talk to me at the gate. I explained why we’d come, and apologized for arriving so late.

“Well, why don’t you come inside? It’s nothing fancy, but it’s a roof over your head. We’ll pull out the straw mattress, and you can eat with me and Cassie.”

It was a very generous offer. The Krytan ranchers don’t have much except what they make themselves, and I was a stranger. Still, the idea of spending the night made me feel a little queasy. What would I say if they tried to do something nice for me to be polite? What if I made a mistake and did something to mess up their house? What if they served moa for dinner?

“That’s very kind of you, but Momo gets a little anxious in new places.” I clasped my hands to hold them steady. “Would it be too much trouble for me to stay in the stable with her?”

Mepi rubbed his chin. “I don’t know. We’ve had all kinds of bandit trouble, though they haven’t been out much at night. It’s that time of year… But I suppose as long as you stay with the moas, you’ll be all right.”

“Just you stay put.” Mepi strolled toward the farmhouse. “I’ll get you a blanket.”

I draped the blanket over my shoulders and settled into the stable with Momo. She fussed, preening at my hair, then curled around me. I leaned back against her—she doesn’t make a bad pillow—and propped my feet up on my pack.
Something bounced into my lap, and I jolted upright. Bright green eyes blinked at me, tiny paws kneaded my stomach, and purring filled my ears. “Oh,” I breathed. “You’re only a kitty.”

The little black cat nosed my chin and draped itself across my legs. Momo opened one eye just long enough to be unimpressed with it, and I relaxed again. This wasn’t bad at all. The grass smelled sweet, the moas were warbling contentedly not far from us, and the windows of Mepi’s house glowed with a soft, golden light. I’d slept in much worse places in college.

With one hand under the cat’s chin, I closed my eyes. 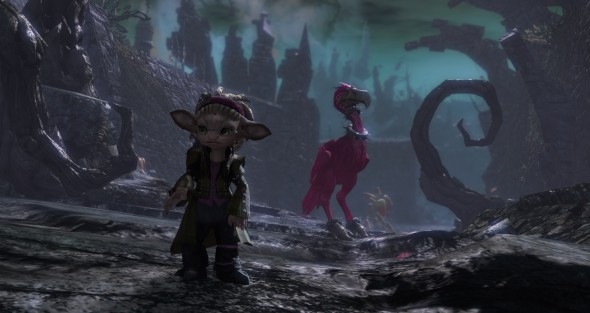 I dreamed I was falling through a starry sky, a green miasma swirling below me. When it broke, I was in open air. Below me stretched a vast, twisted landscape of black stone, warped and barren trees, and strange fires. A broken path wound through it, opening onto a graveyard with one lonely mausoleum raised on a spire of stone at the center. I heard laughter and screaming, and as I hurtled closer I saw that the labyrinth was full of people, all of them running, fighting, and dancing as they went around and around. No, not just people—creatures. Above the chaos, the moon loomed, grinning.

I shut my eyes tight. When I opened them, I was standing on a cliff overlooking the labyrinth. More people jostled around me, passing in and out of a door that opened to the starry void. They were terrifying and a little unreal: a human lady in a corseted velvet gown; a sylvari with horns and huge, leathery bat wings; another asura wearing a fiery pumpkin-head mask. All of them carried weapons. Some of them walked to the edge of the cliff, stood on a sigil, and vanished in a rush of wind.

Momo was nearby, examining a large gourd. Just as I moved toward her, a rough voice called, “Well, well. What’ll it be?”

I turned back. A charr stood on a raised stone platform near the edge of the cliff, leaning on a staff. He was dressed in a tattered shroud, blindfolded and draped in chains, his horns sawed short. At least, he looked like a charr—his tail glowed like a live ember.

The charr stretched out his staff. A glowing green lantern gripped by a skeletal hand swung from the end. “You. Do you have the skill to climb the clock tower? Care to join the parade of death in the labyrinth?”

I shielded my eyes and found my voice. “Neither, please.”

He dropped to all fours, craning his very long neck toward me, and sniffed. “You’re not even the tiniest bit curious?”

The labyrinth was too big, and the screams and laughter were too much. All of the people passing by were dangerous and powerful. I felt completely lost.
“No, thank you.” I rubbed my arms. “I’d really just like to go back to where I was.”

The charr bared his teeth at me. “Run away, then,” he said. “Run right back to where you started.”

I fled to the door, dragging Momo with me. If I could have carried her, I would have. This time, when I tumbled into the starry night, I only felt relief.

When I woke up, my heart was still racing. The cat had gone, leaving my legs cold. Momo was fast asleep, and so were the other moas; I didn’t even hear a peep. I laid very still and tried to calm down.

I concentrated so hard on convincing myself that my imagination was working overtime that I didn’t believe my eyes when a patch of shadow pulled free from the stable’s back wall and crept toward me.

Something lifted my foot aside. I heard a clink, and the softest rustling.

Somebody was going through my pack.

Good grief, a dev is still wasting time on this!?

And you wasted time following the link and leaving this comment, yeah?

Yeah, but unlike devs, I dont have a crows of over a million players waiting for content.
This couldve wasted a few days writing this.. twilight-quality story. Lr they couldve helped the halloween staff. Or the LS3ch3 staff, or the raid wing staff. Or the fractal staff which godforbid is already microscopic.

And they could have written this in their own time, but hey, you clearly have every Anet employees schedule for 2016 and know all

Agree, Tyrian Travels is not fun or interesting I hope they release raid wing 4 and legendary armor til x-mas

I like Tyrian Travels, and I don’t give a skritt about raids.
Dev or not, it doesn’t take long to write a page of txt and as a room full of people came up with this idea, is it inconceivable that others might want to see it aswell?
Chill, and let people have something they like. You will get to grind for legendary armour soon. Raids will always be added but as we will probably never see another GW2 novel, a little story now and then adds a little more to Tyria.

I give a shit to novels and raids. Atm Tyrian Travels is just yada yada yada… good to some players and terrible for others. In other hand legendary armor is a promise from 1 year ago and only 5% of the population (people that do raids) will get it. Im fucked anyway so I will cry alone in the corner.

Thanks umm, for that…..
Im thinking what your saying is:
Not bothered by raids or story but really wanting the legendary armour. Only 5% of peeps bother with raids and they will be the only ones to get it.
That right? have to agree with you that its a bust if true, but until its released we don’t know. Seeing the legendary weapons need fractals is a good indicator that the armour will aswell, but raids are another bucket. A lot of peeps don’t do raids as they aren’t that enjoyable to the casual player. PVP’ers generally get another way to get items easyer than PVE if they whine about it, perhaps Anet will just make them grindable and only extreamly difficult instead of only avalible if your good enough for raids?

You can forget about Legendary armor being out at christmas, at least this year. 2017? Maybe.

I think the stories are cute. Anyways it could be somebody from Community Services or from another non game dev dept so let them have their fun

Agreed. I, for one, am enjoying this story, although I appreciate how it won’t satisfy other players. I’m actually enjoying the relative “downtime” in recent weeks. It’s giving me time to catch up on some other games I’ve been neglecting.

The dev forced to write this either lost a bet or else its hazing.

SPOILER! The Asuran becomes a bondage sex slave while the pink Moa becomes a meal on some Tyrian KFC special’s menu in a south port restaurant located at Lion’s Arch while the remaining dragons die off from diabetes caused by over magic consumption. The world suddenly goes into peace leaving a wide road for Guild Wars 3 but not exactly called Guild Wars but Guild Friendship Happy Land which brings in a new era for fashion designers to come and make their way for fashion…then two weeks later they collide which brings in Guild Wars 4 that is remarkably made similar to a Kardashian mobile phone and web browser game.

TL;DR? Short story. How to trigger someone by unwanted trolling due to getting burnt the fuck out on Guild Wars 2 due to lack of content.

“The labyrinth was too big, and the screams and laughter were too much. All of the people passing by were dangerous and powerful.”

I guess the labyrinth does look 4 times larger if you an asura -.-