Hi, I’m Veldix/Veldoodle, a nightmare raider who plays mainly on the Harbinger server (5.0 killed all of my alts. FeelsBadMan). I am a member of <Failure> and do a majority of my progression raiding with them. I am a newer member to the nightmare raiding community, raiding only since last February. In 4.0 I cleared all 8-man bosses with Failure and Shadow Council of the Ebon Hawk, all by hopping in Jay’s backpack (thx fam). I sometimes stream on twitch (www.twitch.tv/veldixdps). Feel free to drop by and ask any questions you have there or just comment on this guide.

Aside from the discipline path changes (which is pointless for me to cover in an endgame guide), the following are the only discipline/class changes in 5.0 that have affected virulence:

Toxic Surge – Weakening Blast applies Toxic Surge to the target, which causes X internal damage the next time the target takes damage from your Corrosive Grenade.

Hew has been renamed to Decay

Flash Bang and Maim grant Executioner, allowing your next Takedown within 6 seconds to be used regardless of the target’s remaining health and deal 15% additional damage. Controlled ChaosPassive

For every target affected beyond the first, Diversion grants a charge of Controlled Chaos, increasing armor penetration by 15% per charge. This effect lasts 8 seconds. Reinforcing RetreatPassive

Activating Cover Pulse makes the next Snipe or Lethal Shot activate instantly and increases your chance to resist Force and tech attacks by 20% for 6 seconds. CounterstrikePassive

Striking a target with Shiv Countermeasures purges all movement-impairing effects when activated and grants Reestablish Range, increasing your movement speed by 50% 75% for 3 6 seconds. Additionally, the final shot of Series of Shots and Penetrating Blasts knocks back the target if they are within 10 meters. CounterstrikePassive

Countermeasures will also purge all movement-impairing effects when activated. Hold Your GroundPassive

Reduces the cooldowns of Shield Probe and Cover Pulse by 5 seconds, and Escape by 30 seconds. In addition, when you exit cover you gain a Cover Screen that increases your ranged defense by 20% for 6 seconds. Cover ScreenPassive

When exiting cover, you increase your ranged defense by 20% for 6 seconds.

You gain 4 charges of Calculated Pursuit upon exiting cover, which reduces the energy cost of Overload Shot by 100%. allow Snipe to be activated while moving. Each use of Overload Shot Snipe consumes 1 charge, and consumption of the first charge triggers a 20 second rate-limit on this skill. This effect lasts up to 15 seconds but is also removed by consuming all charges or reentering cover. , but reentering cover removes the effect prematurely. Over-preparedPassive

While in cover, you heal for 1% 2% of your total health every 3 seconds.

Currently in all 240s except for armorings and relics, and my current stating is:

I am not anywhere near BiS right now and cannot give a definitive gear setup that I will use, so I am recommending following Bant’s theory crafted numbers:

There are many utilities that are worth taking, and this section will cover the ones that I think have the most use or could be used in certain situations in operations. I usually spec into a 3/1/2/2 setup. 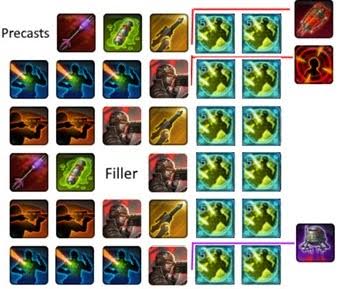 *Broken down by GCD and NOT ability activated, hence Cull and Series of Shots take up 2 consecutive CGD’s

*Precasts are ideally Orbital Strike > (wait .5 seconds) Lethal Shot (hard casted), but if you cannot get both off (because tanks are evil) just try to precast lethal shot to proc your set bonus.

*Filler should be either Lethal Shot or Rifle Shot/Roll depending on energy.

*Lazed Target should be used before all other precasts 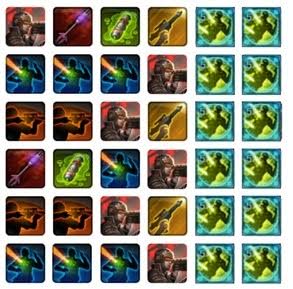 *Broken down by GCD and NOT ability activated, hence Cull and Series of Shots take up 2 consecutive GCD’s

*Replace Lethal Shots with Rolls/Rifle Shots when you are low on energy.

Special Note: I delay dots by 1 GCD to get 1 extra tick of weakening blast in in the first row. This is probably very unnecessary and feel free to apply dots in the first two GCD’s instead

This rotation assumes 100% uptime on a boss, which is indeed very possible in a lot of situations, but not all the time. When we do not have 100% uptime, we resort to a priority system:

You should never delay a higher priority ability except under rare circumstances (such as precasting on the Kell Dragon on Styrak or Kephess 2.0: Kephess Harder).

Special notes on some of these priorities:

2. If you use Weakening Blast in the GCD right before Cull, you can fit the first tick of the following the Cull within the WB window, resulting in an extra boost to damage

6. Series of Shots should be replaced by 2x Lethal Shots if you have excess energy during raid, which often happens if you are double dotting. On a dummy and on a few fights, you can replace it with Lethal Shot + Covered Escape, but it is often going to be more efficient to do this on a 4x Lethal Shot Block instead.

7. Covered escape should only be used if you do not need it to mitigate any damage or quickly move out of something soon.

As far as energy regen abilities like Target Acquired (refunds 15 energy with the set bonus) and Adrenaline Probe (recovers 50 energy), you should generally use them when they are available to use more Lethal Shots and Takedowns. You should hold these if you are coming up on a burn phase, however

Multi-Dotting is a great dps increase when it can be used. It not only increases your DPS but also makes your energy management easier due to dot crits refunding energy. Fights that allow for effective multi-dotting include bosses such as Sword Squadron, Firebrand and Stormcaller, Master and Blaster, Coratanni, Brontes, Council, and a few others. When multi-dotting, the rotation looks like this: 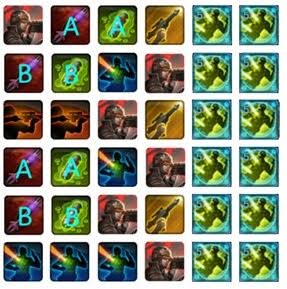 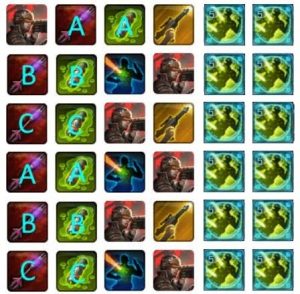 You should use all of your normal attacks (like WB, Cull, Lethal Shot, Takedown) on your main target.

You should try to spread your DoTs whenever possible onto targets that actually need to be damaged. For example, DoT spreading from Styrak to Brontes on Council phase 2 you should do, but on dread guards you should not do so (at least on purpose) except to Ciphas on 1st phase. You should be able to replace a Takedown or Lethal Shot in the rotation with Corrosive Grenade to do so, or you could slightly delay Corrosive Grenade if it won’t delay a Cull. Sometimes it works out that you will dot spread without needing to change the rotation at all. Be happy when this happens.

When you have the ability to AoE, you can do massive damage. Your priorities will depend on much health the enemies have/how will die. If they will die relatively quickly, you should just use a Suppressive Fire or Covered Escape if you don’t need it soon. If they will live for a bit, you should

Spread your corrosive dart of of your main target with corrosive grenade if possible, otherwise just do corrosive dart > corrosive grenade on a pack of ads to spread. If there are more than 4 enemies and you are taking the new Controlled Chaos utility, you should throw a diversion right before suppressive firing. Sometimes we can precast as well, and if that is the case (like in Corruptor Zero), you should precast Orbital Strike.

Use snapshot if you will come out of a Cull with high energy (like 95%+) so you don’t cap/stay capped on energy. Try to never go below 60% energy unless you have an energy cooldown to instantly bring it back over.

In general you should use Lazed Target should be used on cooldown. However, you should hold it if you need it for an upcoming burn phase such as on Brontes.

You can clip your Cull and Series of Shots channels to squeeze out an extra bit of dps. You can clip and 0.0 or 0.1 seconds remaining and still have all 4 hits of each hit. This helps your DPS in two ways: 1) decreases the time it takes to do the same abilities, and 2) helps to make sure you get the first tick of a second cull under Weakening Blast.

Precasting on an in Combat Target

The key place this is important is on Brontes. Since you are already in combat, you can precast your dots on her before she is damageable. I have two precast methods that are dependant on whether I have the energy for orbital strike or if it is off cooldown. My timing for precasting on Brontes is as follows:

(Time Left on Channel / Time into Cast) -because the initial immunity phase is her channeling and when shields are active it is a cast, I am listing both times here.

And from there I go into a Cull and usually a 3x Lethal Shot + Takedown Block.

Virulence is a viable spec on every fight if you can play it right, although it is definitely less ideal on certain fights. This list has been created as a recommendation for when to play each of the sniper specs (subject to nerfs and buffs).

Note: This list is no longer viable due to the class changes in 5.3. Will be redone at a later date.

How to Be Great Raider

You can be able to put out fantastic numbers on a dummy and easy bosses, but none of it matters if you can’t execute mechanics. To be a good raider, you need to but mechanics ahead of DPS. The key to being the best is being able to execute mechanics while maintaining great DPS. Learn to be aware of the things that are happening around you and prepare for mechanics in advance. Know when you need to move and be prepared to save a few abilities or pop defensives in advance.

There are two types of “fluff”. The good kind is when Mercs/PT’s use pyro shield or Marauders use cloak of pain and stand in things to add some dps to the boss when healing isn’t an issue. The bad kind is when you damage adds that you never need to damage, like reaches on brontes are the pirates on bulo. Don’t be a bad fluffer.

Being Ahead of the Tanks

Special thanks to people who have vastly helped me improved and learn:

Yolo for his original Virulence guide that I learned from.

Cloake for being the first person to put me on a NiM team.

Tool for providing quality laughs when he said he taught me how to sniper.

Dongo for being an inspiration to be better.

My boy Jay for having the most comfortable backpack in the world.

And everyone in Failure that I run with.