Virulence is more or less the same as it was in 4.0. It continues to be the medium difficulty Sniper spec, harder than Marksmanship but easier than Engineering. It revolves heavily around keeping your dots on the target at all times, for this spec you must understand that no dots = no burst, it’s kind of weird. You will do very little damage with Cull (your hardest hitting ability) if you don’t have any dots on your target so please make sure to always watch your opponent’s debuffs.

IGNORE THIS SECTION FOR NOW SINCE THEY CHANGED BOLSTER

Before I start talking about gearing it is important you know that everything I state here is in a with bolster scenario. This means that when I say you need X amount of Critical Rating, I am saying that you need the given amount with bolster.

Alacrity Rating: Alacrity is of extreme importance for Snipers. The ability to be able to press a button before your opponent is essential. For example, Ambush has a 1.5 second activation time if you have the buff given from using two Snipes, the GCD (Global Cooldown) is 1.5 seconds as well, Alacrity decreases the Global Cooldown which means that your GCD will be lower than the time it takes for the Ambush cast causing you to have a small window to roll the Ambush, that’s 20-30k damage you can mitigate. Alacrity can be the difference between life and death, it is an absolute MUST. Alacrity also helps your energy regen and it makes your DoTs tick faster. I recommend having about 10% Alacrity.

Accuracy Rating: As a Sniper, tanks usually focus their taunts and other debuffs on you since they know how much Snipers can hit for. On top of that, tanks have a tendency to apply a debuff on you which reduces your Accuracy by 5%. To counter this, you need to have 105% Accuracy to make sure that you always hit your target no matter what the enemy tank has done to you. And most classes have a base of 5% defense chance so having 105% Accuracy is ideal, of course other classes like Sins/Shadows have more but I would not recommend getting even more Accuracy to counter that since you will start losing other stats you need. Imagine missing your autocrit Cull because of having too little Accuracy in your gear, that is a huge chunk of your burst gone, and because of this, there is no question regarding the importance of having Accuracy in your gear as a Virulence Sniper.

How you can achieve these stats: To get to the numbers you need I recommend buying/crafting your augments based on what you get in command crates. Most likely either a Critical enhancement or an Alacrity enhancement will be in the gear dropped from the crates; therefore I suggest that you mainly use Power augments in your gear, but if you are getting little to no Alacrity enhancements in drops then don’t be afraid to buy/craft Alacrity augments in order to compensate for what you are losing with your enhancements. The same thing applies to Critical Rating and Accuracy Rating. Mainhand/Offhand crystals should be +41 Critical Rating (Eviscerating Crystal).

Please note that this utility build is a standard build. You can of course adjust your utilities various ways depending on whether you’re q’ing solo ranked or group ranked and what kind of team comp you have in your premade if you’re q’ing group ranked, but I leave that to you. 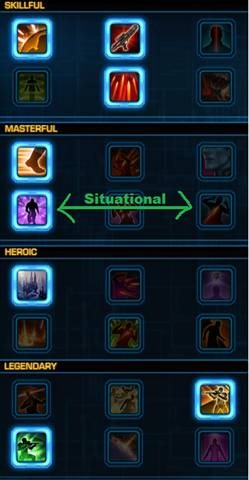 Laze Target + Cover + Lethal Shot with insta-cast (to proc set bonus, if you do not have the two piece set bonus you can skip this part. Just use Laze Target and enter cover) > Corrosive Dart > Corrosive Grenade > Weakening Blast > Target Acquired + Cull > Re-enter cover + 3x Lethal Shot > Takedown > Cull (now they are usually dead, but if not then continue) > Series of Shots > Takedown > Weakening Blast > Cull.

Diversion can be both helpful and a nuisance to Snipers. I will cover both aspects of it here. Using Diversion properly is key when it comes to fighting other Snipers, it will most likely be the most annoying thing you experience when playing the Sniper class, but because of the utilities I have told you to use, hopefully Diversion won’t be as annoying as it has the potential to be. The best and worst thing about Diversion (depending on whether you’re on the giving or receiving end of it) is that it instantly puts you out of cover, and cover makes you IMMUNE to interrupts. This means that if Diversion is thrown at you, you CAN be interrupted and on top of that, your accuracy is reduced by 45% which is why you need to get away from it ASAP. I recommend that if there is a Sniper on the enemy team, always save one of your speed boosts for Diversion. If you have Entrench up (which you most likely will) and are using the correct utilities, you CANNOT be immobilized or slowed (because of Seek Cover) which means that you can get out of Diversion considerably faster than most. Another way to counter Diversion is rolling at the right time, if you know what the animation looks like you can usually roll before it lands on you. The animation looks like the character is using his/her LEFT arm to throw a grenade with green smoke coming out of it. Since Diversion has a short travel time you do have a small window of opportunity to roll resist it.

Huge thanks to my awesome guildies who helped me out with all the testing and research required to make this guide. Awesome support. Especially Den and Duck who put up with having to duel all the time so I could test things.

I would like to thank Hottie for giving me good ideas on how to simplify my guide.

Also enormous thanks to Dulfy for devoting a lot of time and effort into this awesome website designed to help as many people as possible with basically everything SWTOR related.