A guide to the new gearing system in Patch 5.1.

With Patch 5.1 you will have two additional methods to gear out your character in addition to the existing Command Rank system.

In addition to these two new paths, a new currency called Command Tokens will drop from existing Command Crates and rewarded retroactively. This new currency is required to exchange gear from the two methods above. This means that the Command System is still as relevant as ever.

Solo players who do not wish to participate in PvP or operations will still use the same old RNG system of Galactic Command crates.

Command tokens are a new currency dropping from Command Crates and they are needed to convert Unassembled Gear Pieces to Gear. This is done to make the Command system relevant but less RNG. Command Tokens will be rewarded retroactively and is legacy bound. The amount of command tokens that drops from crates depends on the tier level of the command crate.

Vendor for these CXP boosts are found on the Supplies section of the fleet next to all the Unassembled Components/Gear Pieces vendor.

Unassembled Components only comes from PvP activities. You can skip directly to the Unassembled Gear pieces if you do operations but for PvP you have to go through an extra step to earn them. 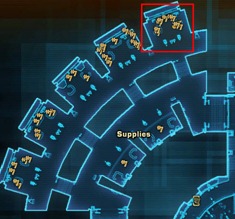 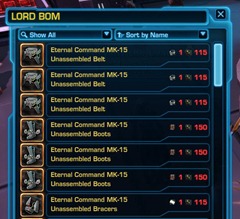 In total you will need 6145 Unassembled Tokens to get a full T3 set assuming you only get your gear from PvP.

The end boss of each operation drops a specific guaranteed piece (2 per in 8 man, 8 per 16m). Other bosses also have a chance to drop an Unassembled Gear

*Chance to drop, not guaranteed since it is Veteran mode.

Finally, the last step is to exchange the Unassembled Gear Pieces and Command Tokens for the actual gear at a new vendor. You will need Unassembled Gear pieces you earned from operations or purchased using Unassembled Components earned via PvP. Again, this vendor can be found on the Fleet supplies section but in a slightly different section. 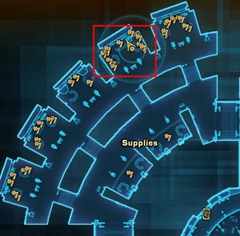 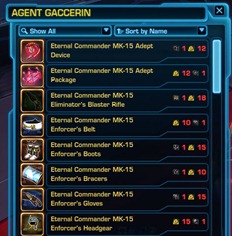 The exchange rate are as follows for Command Tokens.