A guide to the five new Uprisings added with Patch 5.1.

Republic Loyalists under the command of General Amos Rike have displaced Alliance forces on Denova and seized control of the baradium mines. Efforts to reclaim the mines have been thwarted by Republic artillery bombarding the “no man’s land” between the Alliance beach head and the central processing facility. But where an army fails, a small team could succeed in navigating the battlefield trenches and taking out the Republic defenses.

This is the same trench before the puzzle boss in Explosive Conflict operation and just as every bit cancerous. You need to activate three bunkers on your way to the final boss and you activate them by killing the named Commanders that spawn at each bunker. They are not really special except for the fact that they will continuously spawn large groups of ranged mobs that can seriously wreck your group. Generally the best tactic to use is to burn down the Commanders first since they have low HP and then focus on rest of the adds. You can have one person draw aggro on the adds and kite them around using line of sight or have everyone just line of sight the adds and AoE them down. 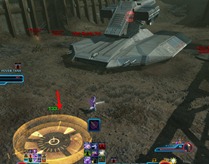 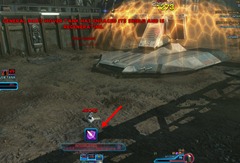 Jedi Master Adelade is trying to awaken a dangerous abomination that has hibernated beneath the surface of Makeb for millennia. No records exist of this monstrosity, known only as Gethul. But if the creature awakes, it may be strong enough to destabilize Makeb’s core and obliterate the planet. Infiltrate the underground tunnel, secure the explosives and deliver the payload to Gethul’s lair. Only then can you destroy the monstrosity and save Makeb from Adelade’s deranged plan.

Upon entering this uprising you will notice a debuff on your bar called Dark Whispers, this will reduce healing received on all members of your party until you remove it.

To remove this debuff, you will need to collect six Dark relics that are scattered from the entrance to the second set of bosses. Once you collect the relics, you can summon a bonus boss at the same location as the second boss that allow you to remove this debuff. There is also an achievement for defeating this bonus. Getting this debuff removed will be handy for Veteran Mode and Master mode in the future.

Do not summon the bonus boss until you defeat the second boss or you will need to do two fights at once. 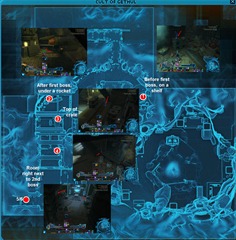 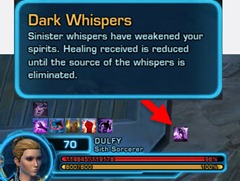 When you enter this instance you will find small boxes lying around. These contain Droid repair kits. The droid you escort has a tendency to run ahead and get damaged by the mobs and tenacles that pops out of the ground. If this happens, it will shut down and you will need to use the repair kits to get it moving again. 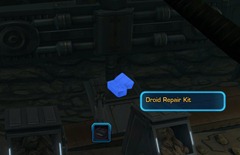 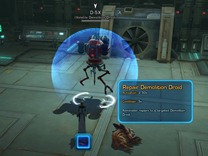 There is an achievement for finishing the instance without needing to repair the droid. This is best done on storymode and you need people to run ahead of the droid to clear the mobs and kill the tentacles as soon as they spawn to ensure the droid doesn’t shut down (tentacles only spawn if the droid is nearby). 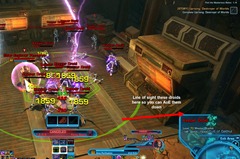 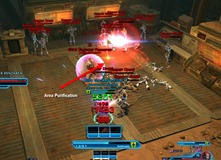 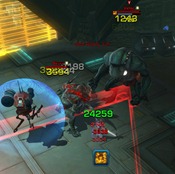 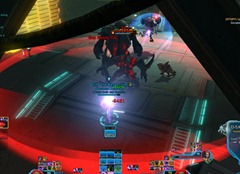 The Caller In the Dark

This is the bonus boss you summon for the Dark Whispers bonus quest. You should only summon it after you have killed Velloc and Skurr. There is an achievement and decoration for killing this bonus boss. 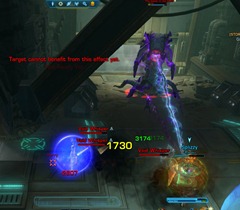 Rogue Coruscant security agents are plotting a false flag operation. They intend to attack the Senate Tower and plant false evidence in the hopes of inciting the Republic to war against the Alliance. Intel has traced the mastermind behind the plan, Commander Kalin, a former Republic veteran to a hidden base inside the The Works on Coruscant’s lower level.

This is a small boss you will encounter after getting past rooms of Cthons. He doesn’t have many mechanics excepting some knockbacks but he will summon Cthons and eventually Savage Cthon adds that hurt quite a bit. If you fight him at the gate (instead of where he spawns, you can avoid fighting some of the adds that spawns). 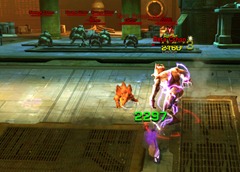 There is a locked gate you will encounter after fighting through some rogue droids. Everyone has to interact with the gate. 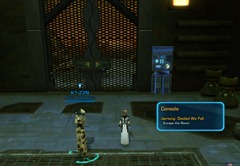 Once this happens, poison will start to spawn in the room. You need to interact with the grapple points on either wall and then interact with the two consoles to stop the poison. As you are dealing with the consoles, droids will also spawn in the room to make your job difficult. On veteran mode you need to this quickly as the damage from the poison and droids can kill group members quickly.

After escaping the room with poison gas, you will need to defeat waves of droids that cumulates with Lientenant Raena. The main thing to watch out for are the floor grates which can lit up on fire and damage you if you stand on it. 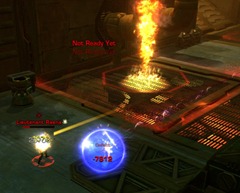 This is an annoying pair of bosses due to the insane damage output from Commander Kallin. 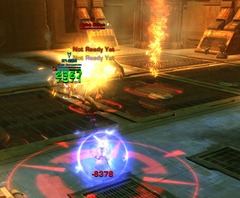 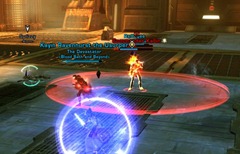 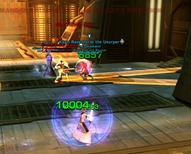 Deserters from the Zakuulan military were tracked to Rakata Prime. Under the leadership of the former Battalion Commander Tassar, they are building a new and improved Star Fortress. Infiltrate their surface camp and eliminate Commander Tassar before her operations threaten galactic security. 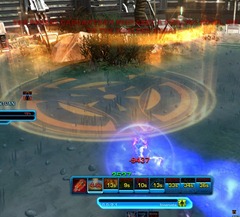 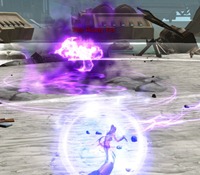 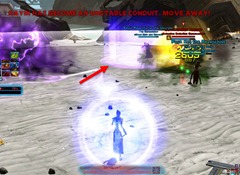 For the achievement Observe and Report, you can find the Imperial Sky hiding in the bushes near the final boss. Special thanks to Civilian of Begeren Colony for locating him. 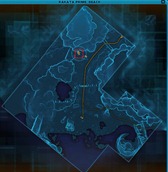 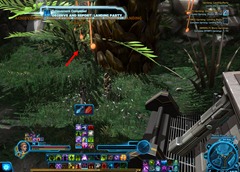 Working from a hidden space station lab, a rogue group of Republic scientists led by Doctor Alirra Semhess has developed an experimental adrenal. The adrenal, code named RS-33, radically augments a subject’s strength and agility at the expense of mental faculties. Left unchecked, Doctor Semhess and her colleagues could mass-produce RS-33 and create an army of unstoppable abominations to wreak havoc across the galaxy.

If you like to transform into a Rakghoul, you can do so in this Uprising. There is a button you can click after defeating all the mobs in the room. This will transform you into a Rakghoul with 4 skills. There are three forms of Rakghoul (heal, tank, DPS) and you can transform between them freely without cooldown.

It is more of a gimmick than a combat enhancement but it is fun to play around for the first couple runs. Here are all their abilities. 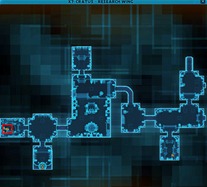 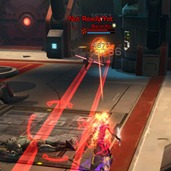 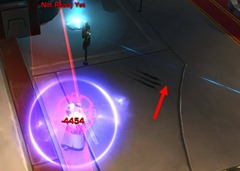 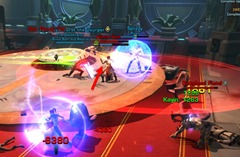 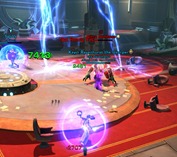