Arsenal is a great spec for newer and experienced players alike. It has a great burst, decent sustained damage, good raid utility, and superior target switching compared to Innovative Ordinance. The only thing that Arsenal (and Mercenaries in general) does not accel at is AOE. It is pretty average when it comes to AOE and can easily mess up your heat if not done correctly.

Here are the stats that I am currently running, (Keep in mind that most people are at the mercy of RNG for their drops, so just use whatever you can get and use Augments to balance out your stats) 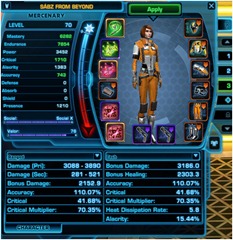 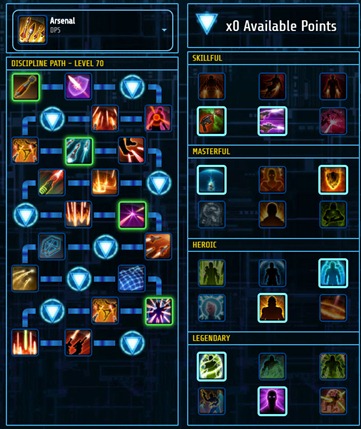 This is a pretty standard fight setup. The only thing that really changes is the Skillful Tier and Legendary Tier if there’s a fight where Trauma Regulators would not apply.

After the Opener just follow the priority system. Setting up a timer in starparse can time your barrage procs for you and make it easier to learn the timings.

The biggest mistake that new people make is thinking that because Blazing Bolts is your #1 damage dealer, that you should prioritize it. Using it as soon as you proc Barrage will not actually net gain you any dps because Barrage has an 8 second internal cooldown. Using Blazing Bolts immediately just delays your Heatseeker Missiles and Rail Shot which will decrease your overall DPS. You still get the same amount of Barrage Procs if you were to delay Blazing Bolts as if you were to use it the moment it was proc’d.

Some notes about the priority system, If you have to delay Heatseekers and Rail shot to proc Blazing Bolts, do so. The only time you will ever use rapid shots is replacing a Tracer Missile. If you are doing multiple Tracer Missiles, and one of them is going to put you over 35-40 heat, (important to noe that that Tracer that is going to be replaced is not going to be the one that procs Barrage) replace one of them with a rapid shots and continue with the priority system. Mercenary energy cooldowns are so good that your usage of Rapid Shots is low. (and in fights you will probably never have to Rapid Shots because generally there is not enough uptime for you to need to use Rapid Shots) If you are having to move and you can’t use one of your instant cast abilities, you can use Rapid Shots so you are at least using GCD’s on something, even if it is suboptimal.

The AOE rotation doesn’t change that much, mainly substituting in Death From Above and Sweeping Blasters in for Blazing Bolts/ Tracer Missile.Most of the AOE abilities are very expensive, so keep in mind where your heat is at, and don’t overdo it just trying to fluff numbers. It won’t help your damage in the long run and may hinder your group from getting a boss kill.

Death From Above is your highest priority AOE ability, i do not recommend using Explosive Dart or Fusion Missile because of their cost. If AOE is needed that badly that you would consider using those, and there are more than 3 targets take the Sweeping Blasters utility and replace a couple blazing bolts in your rotation with Sweeping Blasters. (But as I said don’t do it to the detriment of your heat and don’t delay your main priority abilities)

Generally I usually let the better specs for AOE in the group deal with AOE while I single target the boss. With how tight some enrages are now (especially if some people in your team are undergeared) it is more beneficial to do boss damage then to fluff numbers. The meta right now sees most teams having one of if not both Sniper and Marauder in the group, which can carry AOE situations while maintaining their single target rotation.

This will require a bit of set up to do, as you will need to have Supercharged Gas and 5 Stacks of Rail Shot. If you are saving burst for something like Calphayus adds, Raptus challenges, or even first Brontes Burn you can save the auto crit from you 6 set piece bonus. For Optimal Burst use Heatseeker Missiles > Rail Shot > Electro Net > Priming Shot > Supercharged Gas > Blazing Bolts > Tracer Missile > Blazing Bolts > Missile Blast. Missile Blast seems a bit odd to use in Arsenal, but it takes the place previously held by Rocket Punch. (RIP Rocket Punch) It is an instant cast that does decent damage, just make sure you are in melee range because it has a ridiculously slow travel time. You can also add in a Power Surge + Tracer Missile if necessary.

In Scenarios where your target is immune, and you have time to precast, you can precast Explosive Dart/Pyro Grenade/Fusion Missile. (Fusion Missile is for when you don’t have Pyro Grenade available.) Some scenarios you can use this in is when the Dog is casting Spines in Styrak and in Brontes Burn as she is coming out of her shield. If you get really good at timing, you can get a Tracer missile and a Heatseeker Missiles into your precasts and then go on with your normal rotation.

Positioning and knowledge of mechanics are the keys to maximizing your DPS. Knowing where the boss is going to move will allow you to position yourself to where you won’t be getting line of sighted or have the boss taken out of your range. Knowing mechanics can help you alter your rotation in certain ways that will allow you to get the maximum number of abilities in. You can alter your rotation around mechanics to get your auto crits in before targets are shielded or in some cases where adds need to die quickly.

Hydraulic Overrides one of the best abilities in the game, as it is so useful to cheese certain mechanics and maintain uptime. You should always look for places to use Hydraulics to avoid knockups, knockbacks, etc. Some prevalent uses of of Hydraulics would be the push and pull mechanic on Revan HM, Fire and Forget in DF Brontes, and Grenades in Master and Blaster HM.

Playing an Arsenal Merc also brings a ton of raid utility with an armor debuff, raid buff (that is more optimal than using it in IO), combat rez, reflect and Chaff Flare.

Armor Debuff: The amount of armor debuffs in the game are limited so if you are deciding on playing Arsenal and your group doesnt have an armor debuff, it is definitely worth it. (Your armor debuff is located on Tracer Missile, and you can look to apply it on fights with multiple bosses, such as the Dread Council

Raid Buff: Supercharged Celerity is a very strong raid buff, giving the entire raid an extra 10 percent alacrity. With how Arsenal is played it doesnt rely on supercharged gas as much as Innovative Ordinance, so using Mercenary raid buff is less of a hassle in Arsenal compared to IO.

Combat Rez: The only DPS classes that have a combat rez are Mercenary, Operative, and Sorcerer. Seeing the state that Sorc DPS is in at the moment, and how sparingly few operatives there are out there you are definitely going to need at least one DPS in your group that can rez, and Mercenary is definitely the preferred class of those 3.

Reflect: The newest ability given to Mercenaries in 5.0, Responsive Safeguards, gave Mercs a great buff to their survivability/damage/cheese. Being able to cheese mechanics such as Doom in TFB Dread Guards or Fire and Forget in DF Brontes, while also giving an extra damage boost at the same time, gives Mercs even more utility.

Chaff Flare: In Arsenal your threat dump, Chaff Flare, gives you 5 stacks of a debuff that absorbs a Force/Tech attack. Chaff Flare lets Mercenaries cheese mechanics that other classes cannot.

I hope that my guide helped give you a better understanding of how Arsenal is played, can answer any questions you might have in the comments or you can find me on the Harbinger server where i spend most of my time.

My name is Sabz and currently i call <Failure> and <Origin> my home. I have been playing SWTOR since launch, but didn’t start seriously raiding until I joined Failure in June of last year. I cleared all NiM bosses in 4.0 and all Master Mode bosses in 5.0 playing an Arsenal Mercenary. You can watch my stream @ https://www.twitch.tv/sabunn where you can find me streaming most of my raids.

Want to give a special thanks/shoutout to:

Marisi for her 4.0 guide, never thought when i was learning from it in 4.0 would i ever be following in her shoes.

Kensia, Verudun, and Paen for bringing me into my first serious progression group.

Sevenfaced and Dongo for giving the opportunity to join <Failure> and always being open to any questions that I had.

And a shoutout to all the people I raid with, which the list it too long to name. You guys still make this game fun even after doing the same raids for the last year and a half.