A guide to Samarog the Warden, the third boss of Bastion of the Penitent raid wing.

Samarog is the third boss of the raid wing and is slightly more difficult than the previous two bosses (not by much). Samarog does have a CC bar you need to break every 10% and also bring CC skills such as knockback and immobilize for the 66% and 33% phases.

This fight is divided into distinct phases with additional mechanics added in as the you go through the later phases.

Challenge Mode, activated by using the Challenge Mote, doesn’t have any new mechanics but ramp up the existing mechanics to make this fight much challenging.

Samarog’s fight arena is surrounded by spikes. If any player get knocked into the spikes, it is an instant death with no downed state. Samarog have numerous attacks that does knockback so players need to be extra careful in positioning him to avoid getting knocked back into the spikes. Everyone should be posiitoned behind Samarog (except for the fixation target) and position Samarog in the middle of the fight arena. 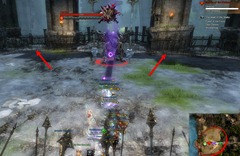 One random player will get Fixation every 10%, this is similar to the fixation mechanic on Slothasor. This player will act as a temporary tank for the duration of fixation (or until they get downed). They will get a purple glowing orb on top of their head as well as a message displayed on screen. This player will need to orient and position Samarog correctly to avoid wiping the raid. Samarog will follow and face this player for the most part except during certain mechanics that are described below. 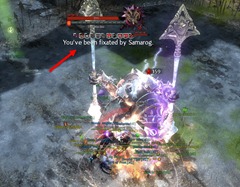 Shockwave is a mechanic similar to the mechanic on Tequatl. Samarog will raise up his front legs and swirl around before finally landing his two spears on the ground, causing a massive shockwave that radiates out from point of impact. 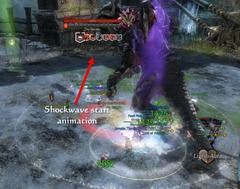 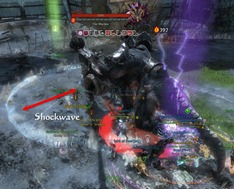 This shockwave deals a medium amount of damage but it knock you back quite a distance (~800 range) so it an be lethal if you get knocked into the spikes surrounding the fight arena. You can avoid this shockwave in two ways by either jumping over the waves or dodge through the waves (dodge towards the wave). I personally find jumping a bit unreliable at times so I always dodge just to be safe.

Prisoner Sweep is a frontal knockback with a long charge up animation. During Prisoner Sweep, he will lift up his right arm and basically sweep outward twice using his spear. This is a knockback with similar distance as the Shockwave but you can get knocked twice (his second sweep can hit you in midair as you fly from the first sweep) and get pushed back even more. This is the attack where he will turn 180 deg from the fixation target to face rest of the raid so you can predict this attack and act accordingly. If you see him charging up this attack, you can simply run into him or invul/block it. 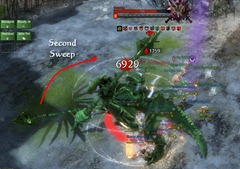 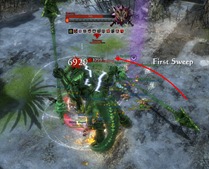 Every 10%, Samarog will pin down the target of his Fixation and start stomping on that player repeatedly in an attack called Brutalize while gaining a Break bar. The player being brutalized cannot act and will continue to receive damage while everyone else need to use crowd control skills on the Samarog to break that player out similar to the mechanic on Matthias. Healers may need to pay extra attention to the player being brutalized to prevent them from doing down to the damage. 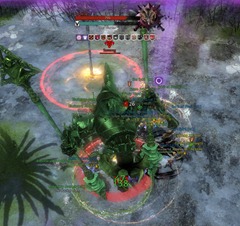 If the player being brutalized goes into the downed state before the stomp begins or get stomped inside a Spear, they have a chance to get killed instantly with no downed state.

Samarog will switch his fixation target after this attack.

Periodically during the fight, Samarog will drop either Spears of Aggression or Revulsion in the fight area. They don’t do much damage wise but if you get knocked or run into them they will apply taunt/fear/daze. You can remove them by either breaking their breakbar or killing them directly. If Samarog brutalize a player inside a spear, the player will also get killed instantly. 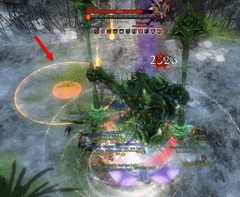 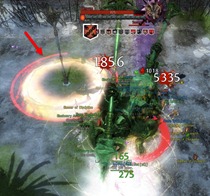 It is a good idea to clean them up periodically to prevent them from taking over the fight space.

All mechanics in phase 1 are present in Phase 2 but with the addition of a new mechanic.

This is a new mechanic that can cause raid wipes if not executed properly. About every 30 seconds, two players in the raid will get two circles, a big orange circle and a smaller green circle. These two players must move out of the raid and stack on top of each other before the circles explode to negate the damage. Failure to do so will cause a raidwide AoE called Inevitable Betrayal that deals ~15k damage. The two players that receive the circles will see a Choose your allies wisely message across their screen. 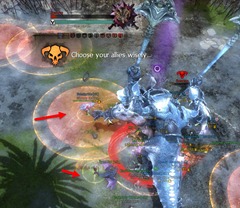 Raid members that do not have these circles must avoid as them as they can still take damage from the circle explosion if they stand in it. Unusually the player with the big orange circle will move out of the raid and stand still while the player with the smaller green circle moves to them.

Phase 3 has all the mechanics from Phase 1 and 2 with the addition of two new mechanics.

This attack has a similar charge up animation to Prisoner Sweep with the key difference being that Samarog will slam the ground with his spear instead. If you are in front of Samarog, you will get hit by this Slam and it can down you in one hit. 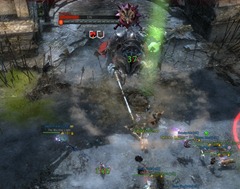 During this phase, Samarog will periodically pull all the spears to him. Before doing so, you will see a big arrows indicating their path so you can move out of the way beforehand. This mechanic is only problematic if you have a bunch of spears of aggression/revulsion up so you may want to clear some beforehand. Regardless, the spears move slow and are fairly easy to avoid. 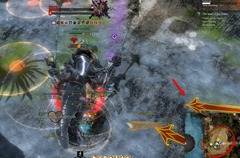 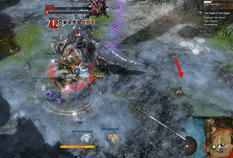 When Samarog reaches 66% and 33%, he will become invulnerable and charges to the back of the room, make sure you are not in his path or you will get pushed to the spikes and die. Two new mobs will enter the fight: Guldhem and Rigom. 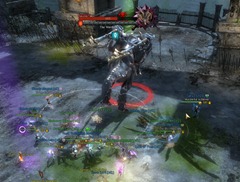 Guldhem is a Jotun mob that redirects all damage received to Rigom, a human. Once Rigom is killed, Guldhem will start taking damage but Rigom will keep getting revived until you also kill Guldhem. Guldhem is immune to all crowd controls but Rigom is vulnerable to all forms of crowd control skills. Rigom will also remove all conditions from Guldhelm once he get revived.

Guldhem and Rigom both have a fixation mechanic, they will fixate on the furthest player from them and switch their fixation periodically. If their orange auras meet, they both gain a stacking both that increase damage for Guldhem and HP for Rigom (100k HP per stack).

To avoid this, you need to keep Rigom and Guldhem apart. The best strategy we found was to push Rigom into the orange bubble that surrounds Samarog using a knockback and then immobilize Rigom inside the orange bubble. Attack Guldhem to redirect all damage to Rigom and once Rigom is dead (temporarily), damage Guldhelm. Repeat this until Guldhem is dead and kill Rogom for the final time. Everytime Rigom get revived and runs out, knock him back into the orange bubble. 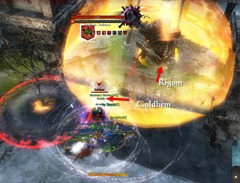 Rigom is invulnerable for a few seconds after he revives himself so make sure to not use your knockback/immobilize until this invulnerability wears out or you will be wasting your CC skills. Guldhem also have an AoE daze/interrupt that can interrupt your skills

In addition to Rigom and Guldhelm, Spears of Aggression/Revulsion will continue to spawn in the fight area. It might be a good idea to clean them up before finishing the phase.