GW2 Mursaat Overseer raid boss guide. This is the second boss of the Bastion of the Penitent raid wing.

Mursaat Overseer is the second boss of the raid wing and is more of a puzzle boss with the fight area similar to a chess board. Mechanically simple but bad execution can wipe the raid. 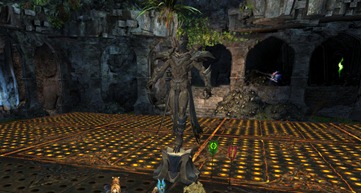 In Challenge Mode which you activate by using the Challenge Mote, it has one additional mechanic.

This one additional mechanic can make the fight much harder with some RNG elements. Sometimes the lethal spikes and blue squares can line up in the same squares. You will need to either find a blue square without spikes or try risk timing it correctly (i.e. waiting for the spikes to go off and then blink into the blue square).

Mursaat Overseer fight is basically a chess board made up of 4×4 squares. This fight is divided into four phases with each phase being every 25% HP of the boss. During these phases, a new pattern is formed every 10 seconds that has lethal spikes popping up at various squares. Your goal is to kill the Overseer while avoiding these lethal spikes and dealing with the four Jade Scouts that move along the chess board from one end to the other. In addition to the spikes, there will be Enemy tiles marked as yellow that pulsates damage and poison stacks on players that can be claimed back.

These spikes pop up on certain squares on a fixed pattern. New patterns are formed every 10s. However, every 25% the patterns are reset. If you get hit by these lethal spikes, you are dead instantly with no downed state. The squares glow greenish with small spikes before the larger lethal spikes pop up so you will have time to dodge/move out. 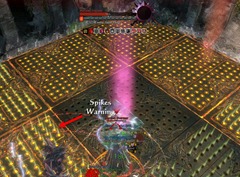 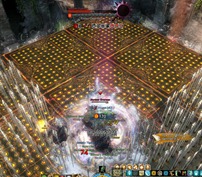 Here is a chart of the lethal spike pattern made by /u/ Mailliwchess, if your group have high DPS and push Mursaar Overseer to the next phase quickly, the remaining patterns for that phase will be skipped. Yellow squares represent the squares occupied by the lethal spikes and white squares are safe squares.

As for tanking, you can place Mursaar Overseer exactly in the middle and have your group move to the safe squares as they pop up. This will minimize movement and maximize DPS. For Phase 4 Pattern 5 you can use the Protect special skill to avoid moving.

Enemy Tiles are yellow overlay on top of the squares. Initially the back 8 tiles have this but as the Jade Scouts move forward, they will “claim” the tiles and mark them as Enemy Tiles. Enemy Tiles have a pulsating AoE on them that deals fairly significant damage and put poison stacks on you that can down you quickly. To remove the Enemy Tiles, you must use the Claim special skill. 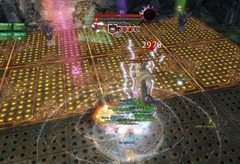 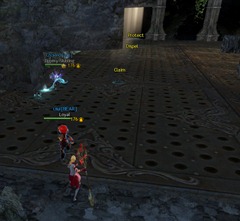 There are four Jade Scouts that start their journey from the back of the room and slowly move their way to the front of the room. They have a shield initially that makes them immune to damage and must be removed with the Dispel special skill. Once they get their shield removed, they become stunned briefly and can be damaged. Once they are killed, however, their HP regen back to full slowly and they continue down the trek. They will repeat this until they reach the other end. During their trek, they will “claim” any square they pass through and put the Enemy Tile AoE on it. The player with the Claim special skill must reverse this to prevent your team from taking damage. 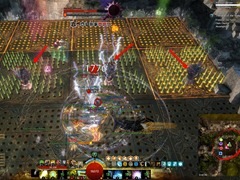 Jade Scouts turn into Jade Soldiers as soon as they reach the other end. It has a bigger pulsating AoE and will move towards your raid. You can cleave them down with the Overseer but be aware of the Jade Explosion AoE (~10k damage) once the Jade Soldier dies. You can prevent this AoE from happening by claiming the square under the Jade Soldier. Once a Jade Soldier is killed, a Jade Scout will spawn in its original place at back of the room and start the trek again. 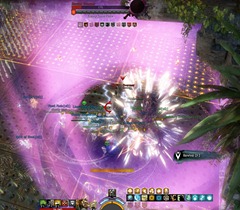 A strategy we use to deal with the Jade Scouts is to ignore the scouts on the outer edges and just cleave down the middle 2 scouts. The outer edge scouts will turn to soldiers that we deal with later while the middle 2 won’t ever reach the other end with all the cleaves.