Hi, I’m Veldix/Veldoodle/Veldimerc, a nightmare raider who plays mainly on the Harbinger server. I am a member of <Failure> and do a majority of my progression raiding with them. I am a newer member to the nightmare raiding community, raiding only since last February. In 4.0 I cleared all 8-man bosses with Failure and Shadow Council of the Ebon Hawk, all by hopping in Jay’s backpack (thx fam). Since 5.0 I have cleared all 8-man NiM bosses as well as all timed runs except DF and DP. I sometimes stream on twitch (www.twitch.tv/veldixdps). Feel free to drop by and ask any questions you have there or just comment on this guide.

Aside from the discipline path changes (which is pointless for me to cover in an endgame guide), the following are the only discipline/class changes in 5.0 that have affected Engineering:

Plasma Probe is now an 8 meter radius ability, up from 5 meters.

I am not anywhere near BiS right now and cannot give a definitive gear setup that I will use, so I am recommending following Bant’s theory crafted numbers (you should try to get as close to these as possible):

There are many utilities that are worth taking, and this section will cover the ones that I think have the most use or could be used in certain situations in operations. I usually spec into a 3/1/2/2 setup.

This is an ideal single target opener on bosses that allow for you to precast. Wait 1 second in between the end of the Orbital Strike cast and beginning the Sniper cast. After the opener you should follow the main rotation.

Engineering has a very set rotation with little ability to move abilities around without losing a lot of damage, which is why i don’t use it as much. However, it is still a very strong spec on many fights.

*If you have Target Acquired (with 4-piece set bonus) or Adrenaline Probe available, you can use both Corrosive dart and Orbital Strike instead of one and a filler.

*Sub-30 Takedown is a higher priority than Corrosive Dart except to reapply your Marked (+5% ranged damage) if no one else in your group can.

If you have the energy/energy cooldowns for it, you can replace Series of Shots in the rotation with 2/3rds of a suppressive fire.

Try to never go below 60% energy unless you have an energy cooldown to instantly bring it back over. Most of your abilities are instant, so this helps to avoid over capping on energy.

In order to maintain maximum dps, you have to have as much Plasma Probe uptime as possible. If you know the tanking pattern, this becomes much easier. When you know a boss is about to move, you should place Plasma Probe in front of the boss so that the boss walks into your probe towards the middle of it rather than out from the middle. The illustration below serves to communicate this a bit betters. 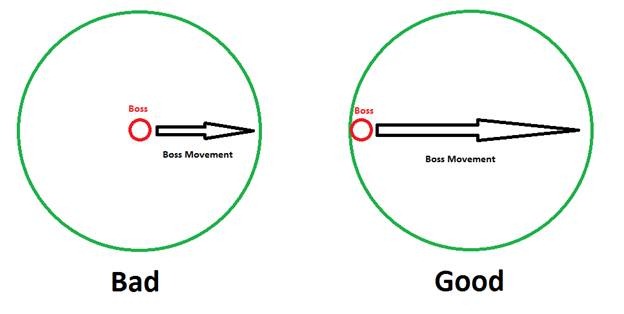 Engineering is a very situational spec for me. It excels at cleave damage. Engineering will be ideal on fights adds that are brought to your primary target. This list has been created as a recommendation for when to play each of the sniper specs (subject to nerfs and buffs).

How to be a Great Raider

You can be able to put out fantastic numbers on a dummy and easy bosses, but none of it matters if you can’t execute mechanics. To be a good raider, you need to but mechanics ahead of DPS. The key to being the best is being able to execute mechanics while maintaining great DPS. Learn to be aware of the things that are happening around you and prepare for mechanics in advance. Know when you need to move and be prepared to save a few abilities or pop defensives in advance.

There are two types of “fluff”. The good kind is when Mercs/PT’s use pyro shield or Marauders use cloak of pain and stand in things to add some dps to the boss when healing isn’t an issue. The bad kind is when you damage adds that you never need to damage, like reaches on brontes or the pirates on bulo. Don’t be a bad fluffer.

Being Ahead of the Tanks

Make sure you know where your tanks are tanking the boss. When a tank decides to taunt a boss far away from you when you just activated a Cull, Series of Shots, or Penetrating Blasts, or just placed a Plasma Probe, it FeelsBadMan. Make sure you know the tanking pattern that will be used to make sure you have as much uptime as possible.

Special thanks to people who have vastly helped me improved and learn:

Yolo for his original Virulence guide that I learned from.

Cloake for being the first person to put me on a NiM team.

Tool for providing quality laughs when he said he taught me how to sniper.

Dongo for being an inspiration to be better.

My boy Jay for having the most comfortable backpack in the world.

Mac cause he’s a beast and the best sniper down under.

And everyone in Failure that I run with.

Are you planning to do parsing videos of specs? would be nice to see how energy menagemant, precasting delay and rotation executions is.

Always wanted to try out sniper, this guide leads me towards it. Thanks.

This spec, along with my beloved Operative healer before the Mother of All Nerfs, is my favourite spec in the game. Try it out, you will either love it or hate it. That’s often the case with Snipers.

Yes, I know the numbers. But the PLAYING is not like it was before. Anyways, it’s a HoT healer: most of that healing is fluff. In fact, compared to pre-nerf spec, these days I always feel I’m OVER healing… Which I am, due to the fact that there’s little burst healing going on.

This latest patch corrected some of that with some Utilities. Alas, I don’t raid anymore. So I cannot REALLY differentiate. But I stand by my original comment: pre nerf Op healers were much better. They DID need a nerf. But not like the “Mother of all Nerfs”…

Hey, as filler, is snipe filler ability as well?

You can use it if corrosive dart won’t get all of its damage ticks in or if you replace plasma probe for it if you can;t get most of your ticks in before you need to refresh it, but other than that I recommend against it

You might want to add what relics they should use, as I see a lot of people running around with less than ideal relics.

Hey, I am quite a beginner on Sniper, but I have “problem”(?). I can parse at 8.3k, (still doing some mistakes), but my concern is that i dont need to use adrenaline probe until like under 30% on dummy. then, i only need it when i combo Orbital Strike + Takedown + Dart in second cycle. Is no energy problem normal or am I doing something wrong and not using Snipers full potential?

You should have to use an energy filler when you use an Orbital and either Corrosive Dart or Takedown sub 30%. You shouldn’t be using an Orbital Strike + Takedown + Dart combo at any point though. You only have room for 2 in the second block.

Silly question, this can be used with Slinger saboteur?

All abilities are analogous to the sabo slinger, yes.

I assume now there will be more fights that are better for engineering as virulence’s sustain dropped down.

You need to discuss your rotation better. Take a look at other guides if you need an idea of how to display your information.