Engineering is definitely the most challenging of the three Sniper specs. I strongly recommend that you play the other two specs before trying this one. It is a very controversial spec, it’s basically a hybrid between DoT and burst specs but it has very strong AoE and CC as well. Because it contains all of these things there is a lot you have to think about when playing this spec, you need to be able to control all of your AoE, your DoTs, and your burst windows which is why I consider it the hardest of the specs. 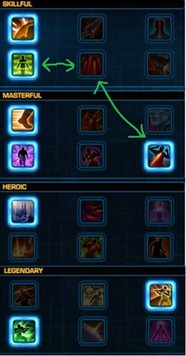 Alacrity Rating: Alacrity is of extreme importance for Snipers. The ability to be able to press a button before your opponent is essential. For example, Ambush has a 1.5 second activation time if you have the buff given from using two Snipes, the GCD (Global Cooldown) is 1.5 seconds as well, Alacrity decreases the Global Cooldown which means that your GCD will be lower than the time it takes for the Ambush cast causing you to have a small window to roll the Ambush, that’s 20-30k damage you can mitigate. Alacrity can be the difference between life and death, it is an absolute MUST. Alacrity also helps your energy regen and it makes your DoTs tick faster. Now I absolutely love Alacrity and the more I play with it the more I love it so I currently run with roughly 11% Alacrity.

Accuracy Rating: As a Sniper, tanks usually focus their taunts and other debuffs on you since they know how much Snipers can hit for. On top of that, tanks have a tendency to apply a debuff on you which reduces your Accuracy by 5%. To counter this, you need to have 105% Accuracy to make sure that you always hit your target no matter what the enemy tank has done to you. And most classes have a base of 5% defense chance so having 105% Accuracy is ideal, of course other classes like Sins/Shadows have more but I would not recommend getting even more Accuracy to counter that since you will start losing other stats you need.

Diversion can be both helpful and a nuisance to Snipers. I will cover both aspects of it here. Using Diversion properly is key when it comes to fighting other Snipers, it will most likely be the most annoying thing you experience when playing the Sniper class, but because of the utilities I have told you to use, hopefully Diversion won’t be as annoying as it has the potential to be. The best and worst thing about Diversion (depending on whether you’re on the giving or receiving end of it) is that it instantly puts you out of cover, and cover makes you IMMUNE to interrupts. This means that if Diversion is thrown at you, you CAN be interrupted and on top of that, your accuracy is reduced by 45% which is why you need to get away from it ASAP. I recommend that if there is a Sniper on the enemy team, always save one of your speed boosts for Diversion. If you have Entrench up (which you most likely will) and are using the correct utilities, you CANNOT be immobilized or slowed (because of Seek Cover) which means that you can get out of Diversion considerably faster than most. Another way to counter Diversion is rolling at the right time, if you know what the animation looks like you can usually roll before it lands on you. The animation looks like the character is using his/her LEFT arm to throw a grenade with green smoke coming out of it. Since Diversion has a short travel time you do have a small window of opportunity to roll resist it.

Huge thanks to all of the following:

Good sniper can confirm he knows his shit.

How do you feel this spec works in ranked? Engineering/Sabo works GREAT in WZ’s, but in ranked arenas it seems the damage can be healed over too easily.

Recently I have actually been playing Engineering more than the other two specs in ranked. The burst is really good and the new plasma probe radius increase just makes it better. The biggest problem I find though is that you need to be really careful with the placement of your plasma probe, you don’t want to unmez people you just mezzed by accident. For healer games, if I know the enemy healer is smart, I usually don’t put down plasma probe unless the enemy healer is whitebarred otherwise he is just gonna stand in it and make mez impossible.

I know there’s no “set rotation for PVP” and all that, and it might just be lucky matchups, but for something like Voidstar, I do really well just following the old 4.x PVE Rotation for this spec

It was the 1st time I ever broke 4 million damage in a Warzone.

Yeah of course if you are left to free cast you might as well refer to the PvE rotation, which happens in regs sometimes but for ranked that almost never happens. And nice job with the 4 mil 🙂

yeah , do that and watch your energy gone with the wind

Virulence or Engineering for PvP?

I prefer Engineering. It is just so much stronger in 5.0, sorry for late reply.

All 3 seem good so far in regs to me … with a good healer marksman prolly most effective at taking enemies down fastest … virulence seems to put resource pressure on enemy healers well … and engineering is very tanking when played well and frustrates enemy dps so much that they seem to go find another target …. all specs when focused by 2 or 3 die

Sink, how about engi in 5.3 ? they got a little bit nerfs. How do you rating it in pvp / pve ? can you ask for screenshots of your quick bars of abilities ?

Thanks for the guide … been years since I played … I was playing engineering from launch albeit was hybrid when you could pick from all 3 branches … anyway you caught me back up to the current game with your guide thank you much …. I only have 230 gear but holding my own in matches thus far … actions per minute can be insane verses marksman so players be warned

Are you on Star forge btw played against a kitchen sink in Regs last night ?