Greetings Adventurers,
We know you’ve been patiently waiting, the time has finally arrived and we’re pleased to announce the release of the much anticipated Dark Knight. In celebration of welcoming this latest addition to the game we’re introducing a new event!

Players can engage in a variety of activities to begin collecting Dark Knight’s Seals, which can be turned into one of two prizes aimed at helping players get started on their new class.

Players can enjoy increased combat experience to commemorate the release of the Dark Knight class.

Join us in the celebration of Black Desert Online’s first anniversary!

Event Details: To kick off our first anniversary in style we’ll be spawning special event Field Bosses! All players who hit the boss at least once will receive the [Event] Field Boss Reward Bundle. We’d like to allow everyone to participate, and as such there is no death penalty should you fall during battle from the boss fight.

Be sure to join us in Northern Cienaga (The lake just south of Heidel). We’ve included a list of channels and times below: 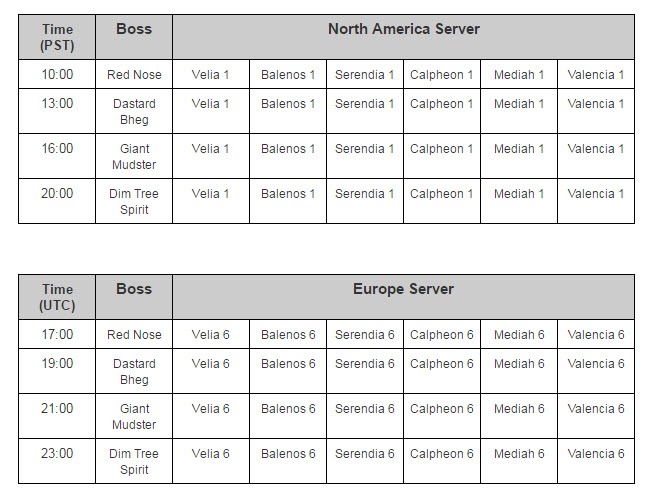 Join us in the celebration of Black Desert Online’s first anniversary!

Event Details: In celebration of our one year anniversary of Black Desert Online, players will receive a special furniture item to showcase in their house via the in-game mail system! We’d like to introduce a new event, and this comes in the form of a Coupon Giveaway where Loyal Players can enjoy limited time coupon(s)! See more detailed information below: Event Details: Loyal players will receive a single 20% Discount Coupon (x1) via the in-game Coupon Book in the Pearl Shop. This item can be applied to every Pearl Shop category except Pearl Boxes and Loyalty items. The attendance rewards for New and Returning players have been adjusted and the duration has been extended. [ Note: We’ll be rotating winners’ screenshots over the next few weeks ]

Our recent screenshot contest has ended and we’re adding a new rotation of winners’ masterpieces to be included in the Black Desert Online game loading screens; check them out below!