A guide to the Tyth operation boss on Iokath released with patch 5.2.

Tyth has two cleave/AoE attacks that follow the tank. One is a simple triangular cleave and the other is a long rectangular attack called Energy Wave. Tanks can simply stand on the edge of the platform and eat these attacks. 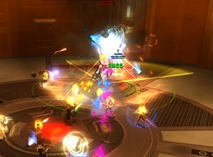 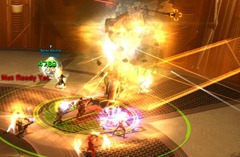 There is a tank swapping mechanic right after Inversion where Tyth places a debuff on the current tank that increase their damage taken. The tank being swapped in must stand outside the Inversion circle so they get pulled in. Otherwise Tyth will aggro a random person and cleave them. Tyth also regularly places a stacking armor debuff on the tanks that can be cleansed off by the healers.

Tyth has a mechanic where he will gain rage stacks. These stacks will increase and decrease through the fight with a raid wiping mechanic if it reaches 10 stacks.  Tyth gains 1 stack of Rage everytime an ally droid is killed (3 stacks if he killed the ally droid himself) but will autocleanse or decay one of his stacks every 8 seconds. The Grace droid also have a cleanse skill that will remove 3 stacks.

The goal of this fight is basically managing the rage stacks to ensure it never reaches 10 stacks. Once Tyth reaches 10 stacks, he will cast a raidwide AoE that deals massive damage and wipe out any remaining droids. This basically enables him to chain cast this AoE due to additional stacks from the newly killed droids.

As Tyth gain more stacks, his auto attacks (cleave and Energy Wave) get bigger in radius and becomes more likely to hit helper droids that spawn. His attacks increase in size at 3 stacks and 6 stacks.

Every 30 seconds, helper droids will spawn in waves. There are four types of helper droids. Killing any of them will grant Tyth 1 rage stack so you will need to control on when you kill them. Tyth’s AoEs can also kill them so do not drag them in front of Tyth. 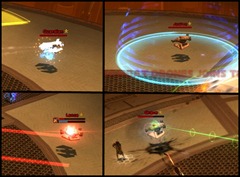 From 100-60%, every 30s a wave of four droids will spawn. The droid compositions are random but every even wave (i.e. wave 2, 4 6, etc) will have at least one Grace droid. Sometimes two Grace droids can spawn so you will need to have backups prepared for interrupts. Past 60%, droid waves will compose of five droids per wave and adds to the difficulty.

You want to time your kills so that the Grace droids can remove any stacks of Tyth’s Rage before being killed. This allow you to kill the Grace droid, wait for the decay, and then start the next droid wave without any stacks.

Inversion is a mechanic exclusive to hard mode. 20 seconds into the fight and every 40 seconds after, Tyth will cast an inversion skill. This skill will pull all raid members on the platform to Tyth unless they are already inside the Inversion circle.This is a 5 seconds channel so you have 5 seconds to get into the circle.

If you are not inside the Inversion circle at end of the channel, you will get pulled into Tyth and receive a debuff that reduce your damage and healing. If you are already inside the circle at end of the channel, you will get thrown out of the circle and instead get a buff that increases your damage and healing. What the tank want to do is to position Tyth right at edge of the platform and have everyone run inside the inversion circle to the edge of the platform right in front of Tyth. This will get them thrown to the middle of the platform with the damage/healing buff.

One important note about Inversion is that it will block all movement/gap closer skills for a few seconds so you cannot use skills such as Force Speed/Force Barrier/Leap etc. During this you will need to have a ranged DPS focusing interrupts on the Grace droid as melee cannot leap back to the Grace droids in time to interrupt the heals.

As Tyth get to 30%, you may choose to ignore all the adds but the Grace and do a final burn on Tyth. Healers will need to run around and kite the adds while rest of the raid focused on killing Tyth before its adds overwhelm the raid. Remember that past 60% Tyth summon droids that comes in waves of 5 so the Rage stacks accumulate faster and you have very little margin for error. It ultimately comes down to your group DPS as this tactic may not work if the DPS is lacking.

Thanks for the guide! Sounds like its finally something new and fun!

They didn’t work 2 years on this boss, I guess. They did many things the last to years, developing this new boss was maybe part of it for the last couple of months, I think.

Eh, on most bosses the 16m and 8m mechanics are identical.

It’s a game, don’t think too highly of yourself there. ;D

So from the videos, his cleave looks to be about 90 degrees at 0-2 stacks, 120/130? degrees at 3-5 stacks, and a 180 degree half-circle at 6+ stacks.
His energy wave does get wider at those same stack values, but I can’t really tell how much from the videos. 6 stack rectangle looks to be about.. twice as wide as 0 stacks, but that might be camera perspective. It shouldn’t be a huge issue as a DPS though, since the conal is wider than the beam. Be more behind the boss than beside it and you’ll be fine.

I’m at a bit of a loss for one thing though. Right near the end of your healer pov fight, Tyth suddenly went from 9 stacks to 21 stacks, and I cant figure out why. Anyone else better at noticing things?

I think what happened was Tyth cast his AoE instantly upon reaching 10 stacks and killed about 4 droids. He can gain stacks very fast near the end by killing his helpers.

I was expecting an enemy titled “God of Rage” to be.. you know.. Bigger.

This droid is not big enough. 😛

I suppose you need to nitpick if the operation sounds cool 😉 But yeah the droid kinda looks small, much smaller then Titan 6 for example.
Looking forward to the op.

I didn’t mean for it to sound like I was nitpicking, don’t get me wrong, I am looking forward to the operation as well.

I’m just saying, for being titled the “God of Rage”, it’s quite a miniscule droid. I can’t be the only one expecting the droid itself to be larger in scale, can I? :p

Titan 6 sized would be.. impractical, since the room is quite small 🙂

Thats what SHE said.

But it’s really really angry which is nice…

The reason the droid is so angry is because all it’s brothers and sisters make fun of how small its weapons are in comparison. “Tyth is that a peashooter in your chasis?”

Sounds like the same Mississippi crawdad friend of Forest Gump voice they used for Master/Blaster beyond the Thunderdome of Rishi.

IT IS NOT AN OPERATION! DON´T CALL THAT PLS!
IT´S ONE FUCKING BOSS!

HEY EVERYONE, LOLOLOCO SAYS “DON’T CALL IT AN OP” SO WE CANT NO MORE!

It is in fact, the first boss of an OP, so I dont know what you think it should be called. An “OP puzzle piece”? What do you plan to call it in a month or two when the next boss room is added to the “not-an-OP”?

Just the new boss! SWTOR will have the new OP at the end of the year… after 4 fucking years the game will have a tinny op with 4/5 bosses… then you can call it an OP!

See, I can scream in all-caps too!

You’re crowing about beating SM? It’s only there for people with bad gear and minimal clue.

Her guide above for SM says coming soon, im saying dont waste the time. Sounds like you wiped lmao….

Shhhh, your virginity is showing again.

LaL… all SM Ops really easy – like for lefthanded with bolster…

Yeah, but if they are only dropping ONE new boss at a time, it shouldn’t be complete cake for a PUG group first time through….. just saying

Please. No one can beat Gypsy Danger, only Kaiju can.

Btw. As a tank, you can use Tyth’s AoEs to kill the adds. If all the dps just stay on the boss and interrupt Grace as needed, and the Tanks just pull all the adds in front of the boss, the dps don’t have to worry about killing adds. Just be careful to not point the AoEs onto the group or have them all stay behind the boss like the first boss of KP

Every add he kills gives a stack of rage (3 in HM). While our group killed it in 2:30 minutes, almost no group will kill it that fast. We were already above 10 stacks while letting some just sit around at the end of the kill. Pugs will not be able to tank/heal at 20+ stacks if you eat every add. He will also do the raid wide aor mechanic at 10 stacks. Absolutely do not do this.

you need to keep one person outside the inversion circle (preferably a tank) to get pulled to tyth at the end of inversion. that person will have aggro. if you do not keep someone outside the circle, tyth will cast an insta-kill called resonant implosion. not sure if it is a cleave mechanic or random on that

Sorry for hijacking the ops thread but I didn’t know where to post this:

!!!SPOILER ALERT re: pub side story of the Iokath update!!!
…
…Don’t read if you want to play it yourself first…
…
..
.
So I went there with my Vanguard last night and sided with the Republic. I always knew Acina was waaaay too good for a Sith in KotET and I always knew something was really not right with her. Helpful, kind, giving… Finally saw her true (Sith) face on Iokath. Killed her without thinking. One other super-uber powerful Force user Emperor/Empress died by my Vanguard’s blaster. He’s turning this into a habit!!

Reunion with Elara was short and absolutely not satisfying at all. Missions on the other hand were fun and different. Boss fights were not your typical pew-pew-pew fights which were nice. You had to think and look around you to figure out what to do.

Oh and we have a traitor in our alliance. All evidence point to Arcann in my opinion but we’ll see.

Next I’ll side with the Imps and see the story from their perspective. Aaaaaand kill Malavai in the meantime of course!

My apologies again for hijacking the ops thread but I just had to get this off my chest.

If you play imp side, Jace dies.

Jace is just as retarded if not more than Acina.

You are absolutely right.

Soz just had to drop this in here because whenever I hear the boss I always think if this.
Plus I love song.
https://www.youtube.com/watch?v=bWXazVhlyxQ

Not coming back for this. :/
Way too little.
Way too late.

nobody cares you exist

Thanks Dulfy for the guide! Much appreciated! 😀

That Veteran mode looks complicated :/
…ohhh the wipes in the future are tingling me 😛