You get 5 AP and the Houndskin Shoulder Skin, made fresh from Garm. 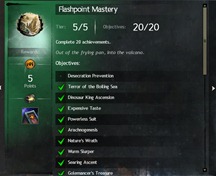 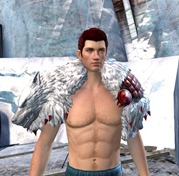 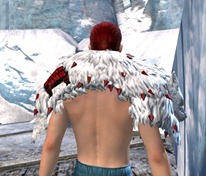 Taimi’s Pet Project Instance. Repair three of Taimi’s malfunctioning sprinklers. These sprinklers only spawn once the three mirrors are repaired by the golems. You need to use the stairs and then the updrafts to reach the sprinklers. Land near them and press F to repair them. 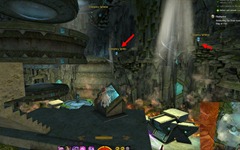 Taimi’s Pet Project Instance. During the fight with Lazarus, avoid his ring of fire attacks. They appear as an orange circle first so you have time to dodge out. 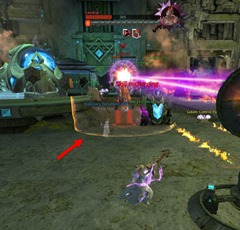 Taimi’s Pet Project Instance. Defeat 10 mercenaries in the battle. Pretty easy achievement that you should automatically get if you are doing the story solo.

Go Nuts with the Scanning – 5 AP

You have to scan 9 objects to complete this achievement in Heart of the Volcano. . The 9 objects are

You may have to repeat the Heart of the Volcano instance a few times for this achievement. When you doing the descent, you need to avoid getting hit by the green balls shot by the destroyers. At first it is pretty easy but as you get down to the final orb, there are numerous destroyers all shooting at you. Luckily you just have to break one of the anchors to despawn the destroyers so scan the orb and then destroy the anchor ASAP. Once that first anchor is down, you are pretty much guaranteed the achievement. You will get the achievement at the end on the Balthazar platform.

Only doable at the very end of the Heart of the Volcano. After you destroy that big “thing” in the middle, energy orbs will pop up in the sky and you have to glide to each. Find all 12 to complete the achievement. Sometimes the instance may bug out and only show you 10 out of the 12. In that case you have to restart the instance. 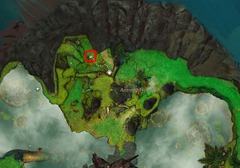 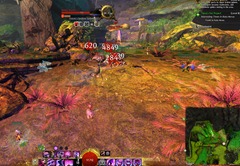 Kill the Champion Stonehead King in Savage Rise. There is a pre-event to escort the baby Bristlebacks from a scout NPC a bit north of Scout Clearing POI 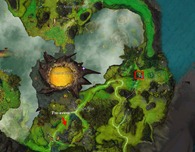 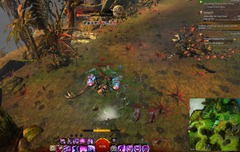 Kill the Champion Greater Wardbough at Eternal Pool PoI in Savage Rise. There is a pre-event from Scout Clearing POI to escort the NPC to Eternal Pool to spawn this champion. 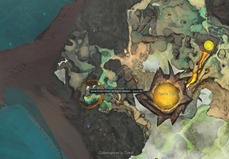 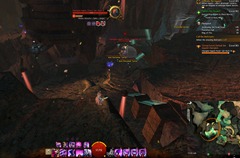 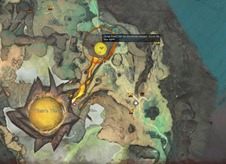 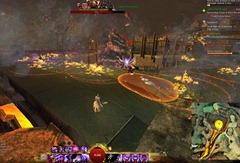 While this is masked as an exploration achievement, what you really need to do is to kill the Champion Arid Parasite Devourer that spawns in the Golemancer’s Tomb. Once that champion is killed, the treasure spawns and you can interact with it to get the achievement. 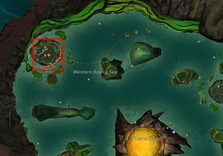 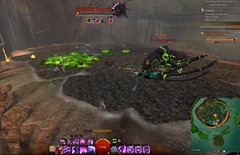 More of a troll achievement, you will get this when you die in the Boiling Sea. The water ticks constant DoT damage and can kill you in a few seconds.

Burnin’ Down the House– 3 AP

There are two turrets near Heathen’s Hold Waypoint on the way to the volcano. Near one of the turrets is an Oil Barrel some Cannonballs. What you want to do is to jump oil on the cannonballs and then keep dumping oil (press #1) in a path until you connect the oil to the lava. this will cause a chain reaction that will blow up the turrets.

Find the Golemancer’s Tomb. You have to enter this specific room for the achievement to trigger. 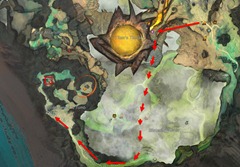 Diving Goggle achievement. Run to the volcano from Heathen’s Hold Waypoint and use the diving goggle there. You want to aim for the little bucket below in the boiling water. 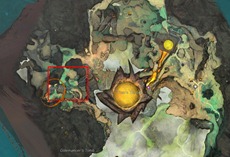 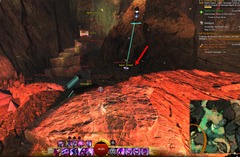 This is the jumping puzzle achievement for this new map. Jumping puzzle isn’t too bad (not really any hard jumps) and there are three checkpoints along the way. However, it can be confused to figure out where to go. Checkpoints are not required for the final chest/achievement so you can have a mesmer portal. You also absolutely need the new Oakheart Essence mastery for the jumping puzzle.

It can. Just wait at the top for safety and let your friend do the work.

@ sam
that didnt work for my friend when we tried to get the achievment together. what DOES work however, is to have the one who is NOT the instance owner fly down and clear all the vine touched mobs beforehand while the instance owner waits up above. once its clear he can move down safe and sound and open the next sub level. rinse and repeat. this does however mean that the one clearing the mobs will obviously lose the achievment so you’ll have to do the story instance twice for both to get it. clearing the mobs takes a bit of time, but its definitely worth the extra time.

Yes it’s possible, but only the one that opens the story have the special skill so all the rest in the group stay on top waiting for him to finish all the levels, then the rest of the group jump all the way down and get the achievement.

Alternatively, you can grab your guardian. Aegis blocks the fireballs, and you can use F3 and Retreat while falling to gain more aegis. Slot Honor and Virtues for shorter cooldowns.

Despite being named “Fancy Flying”, If you’re hit on ground you lose the achievement too.

Insight: Scalding Gorge
You can do it without the new mastery. You have to use the thermal tubes that get you to the Apex then the one that sends you west. In the middle of the flight just glide North towards the Insight where the Updraft is.

Thanks so much dulfy!

BTW Burnin’ Down the House can be done with another smaller rotating turret(the ones you see in silverwaste) with a fire pit nearby in a simillar way with oil barrels and the fire pit. And the crypt can be entered from the north. There’s a small cave near the inquest base with oakheart essence which you can use to go up the ceiling and jump over the wall

just, dont tell it to Braham..

Also something I noticed, 50* terminals not 60.

Fancy Flying can be done with someone, inside his/her instance, just stay up and let someone else do dirty job

Flight achi can be soloed easier on a Guardian due to Aegis you can have while gliding. Make sure you always use Retreat before you take off and use your gliding stealth and falling to evade most fireballs. Also keep in mind that mobs can continue to shoot at you for a while after you land, so move around and dodge or keep a Shield 5 handy.

“Made fresh from Garm” – wonderful you picked up on that joke 😀

I was acutally shocked when I read that lol

He makes it quite hard to reach some of the resource nodes in your home instance however.

This Destroyer of mice a real thing? I cannot find reference to a new cat anywhere?

Where the heck is this Destroyer of Mice? All I see mentioned about it the conversation seems to always assume you already know.

I find this map and living story to be awful. Until now I felt obligated to get my effort and money’s worth out of GW2 so I stuck with the prior stories. This is the momentum I needed. To those people who still enjoy the game- I’m honestly happy for you. Please don’t take my comments personally. And so… goodbye forever.

Considering this is the best map they have released in Living World Season 3, I don’t think GW2 was the game for you. It really feels like we are in a long dormant sunken caldera, it’s so cool, with all the layers of rock and boiling water!

There’s some nice scenery and views (once you reach them), but this map feels like a nightmare to navigate – or am I missing something?

Yep. I feel the same here. It takes awhile to figure out and remember the fastest ways to get around to particular points on the map.

Still, props for the creativity and uniqueness of this setting.

Totally agree, love the new map. Wish there were a few new enemies and a few from the past GW1 though.

Very subjective. I personally am not a fan of the too-3-dimensional map (particularly the hidden/in-between extra floors/levels between the main ones). Some of the achievements were grindy, particularly when you were only after the achievement and not the item reward (Druid’s Stone backpieces). But the worst of it is not enough to cause me to quit. In the end, it was worth doing, even if just for the twists in the storyline and additions to the world building.
Wherever you are now, good luck to you, The Real. I myself am still happy with the game.

On the Hot Splashes, you can use the oakheart vines to spiderman yourself right to the bucket–grab the oakheart essence before you dive, dive and then, as you’re getting closer if you’re off target for the bucket, use the vine to go straight there. (At least it worked last night when I did it.)

even easier (but maybe not as fast)
commander tag > go down > place green arrow marker right in bucket > back up > dive > ?? > profit

Nice bit of lore about the shoulder piece you rewarded for doing most of these. There is a note in the mercenary camp saying how it is far too hot to wear the wolf pelt in the volcano but the line members recognise it as a symbol of authority so the officers are expected to wear them at all times anyway.

Another option for the Insight: Western Boiling Sea, map to Ancient Hollow Waypoint [&BNUJAAA=] run south-west off the cliff edge, reverse direction and glide down to the insight which is just under the cliff edge.
Don’t forget to pickup a firestone shard nearby!

1) get someone in a party with you, let him open the instance.
2) while he does the entire descent bit, you stay upstairs, hiding from the destroyers.
3) once he clears the last field, just drop down for a free achievement.
4) leave and start from step 1 but you open the instance now, so the friend can get the achievement.

Fancy Flying tip – Since you only have to break one of the bottom anchors to get the destroyers to despawn, when you are at the second, re-scan the orb to release another anomaly before you throw your current one to finish off the last anchor. You’ll have that anomaly as you fall, and can quickly dispatch the anchor below without having to scan and catch with all the destroyers firing at you.

The NPC for dinosaur king achievement was moved up a bit, here’s where I found her https://imgur.com/x86hzLQ