GW2 Lessons Learned Zinn’s Recordings Achievement Guide. Special thanks to Trad, Rubik and Shaard.9741 for their help in assisting with the guide.

This achievement rewards you with 6 AP and the Sentinent Singularity consumer that can consume any excess Unbound Magic you have. 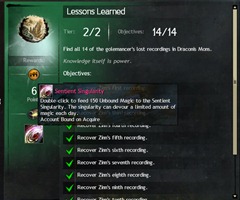 This one is in the mercenary camp hidden in a tower on the ground with stairs going down. 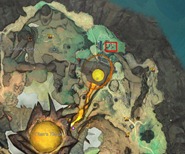 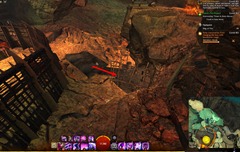 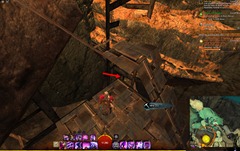 Take the 2x Thermal Tube from Heathen’s Hold Waypoint and make sure to grab the Oakheart Essence after the second thermal tube. Glide your way to the location with all the destroyers and you will see an opening. Run through the opening to the end and use your Oakheart to get up.

Take 2x Thermal Tube from Heathen’s Hold Waypoint and glide your way to the inquest camp where you can find the third recording among the Inquest mobs. 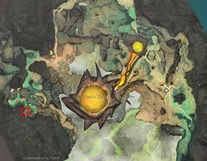 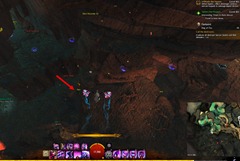 Run from Heathen’s Hold Waypoint, grab the Oakheart Essence nearby and grapple you way too this little ledge. As soon as you land, look for a tiny hole on your right that you can jump in and get the recording.

You can get out from the fourth recording using the Oakheart and then on around on the same ledge to a little tent. Behind the tent is the fifth recording. 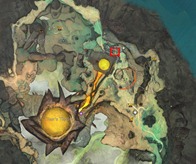 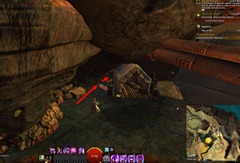 Shoot yourself to the volcano via the thermal tubes and glide across to the area that take you to the tombs. Along that path you will find a small crack in the walls with some spiders where the recording is hidden.

Go right from Ancient Hollow waypoint and grab the Oakheart essence nearby. Pull yourself to this ceiling not far from the waypoint to grab this recording.

For the eighth recording, use the double thermal tubes from Heathen’s Hold Waypoint to shot yourself across. As you begin to descend, glide to the right side in a valley filled with earth elementals. Grab an Oakheart Essence. Shoot yourself across to this large cavern opening.

Inside is a hole you have to shoot yourself across and then the final one where you have to get in the nook where the recording is located.

This recording is very well hidden. Drop down from Heathen’s Hold Waypoint to Peaceful Grounds waterfall POI below. To the left of the waterfall is a ledge with wasps so use Oakheart nearby to throw yourself on it. Once you are on that ledge, keep running and pick up the Oakheart nearby.

Keep running and look up for a crack in the ceiling. It will be tricky to get there since the crack is really high so you can’t reach it in one shot. Aim abit lower to get yourself to a higher ledge and then aim at the ceiling crack while be sure that no rocks block your trajectory. The recording is inside.

Go northwest from Ancient Hollow waypoint towards the dead end. You will find a small opening on the ground to your left.

Glide down from Heathen’s Hold Waypoint towards Savage Rise. This recording is slightly off the ground of Savage Rise. You can use an oakheart to access it.

This is inside Iota vault. Make your way to the vault from Heathen’s Hold Waypoint and take a right once inside. Make sure you have Oakheart essence and just grapple over the outcropping.

You can glide down here from Heathen’s Hold Waypoint and pick up an Oakheart essence along the way to grapple yourself up to this little cavern by the ceiling. Once you are up there, go to your right for the recording.

This one is a bit well hidden. Take the thermal tubes that shoot you to Rata Arcanum but take the Oakheart Essence by the divng goggles as you glide off. Now drop down to just below Rata Arcanum and look for rocks in the ceiling that you can use your essence to pull yourself higher.

There is a ledge on your right that you can fly up to if you are high enough. Try pull yourself to the hanging pillar with the Oakheart next to it. This will you to get to the ledge with a bunch of earth elementals. Run through them to find the recording in a hole at the end.

A bit complicated .. especialy the 9th but thank you :3

It would be unbelievably cool if we got the opportunity to combine all of the sentients into a single item a the end of this season. In the least case a mini. In the best case a legendary backpack or trinket (featuring the 6 sparks trailing behind you playfully in the air and merging into you plus some Fx during combat).

Damn you was right

I’m not sure what to do right now. Guess I should gloat or whatnot.

There was a legendary Trinket name data mined as we’ll. Waiting to see if it’s connected to this as well.

this is a very interesting achievement becuase it shows Zinn’s final moments in life.

I can’t achieve 2nd, the jump using mastery is hard to me I’m never able to get on the platform with the recording…thus having to wp back and try again since there isn’t a close recharge for mastery -.-

I lost count of how many times I had to run back to get the essence.. it is impossible..! xD
I wonder if there’s any other way to get to it..

Who has excess unbound magic? O_o

Thanks for the guide, life saver as usual 🙂
For #14 I think there’s an easier way. It was for me anyway, I couldn’t find it going via Heathen’s Hold WP.
Instead I went to Ancient Hollow WP. From there go to SW on map, to the edge, that point where there are 2 ley lines, and take the one that pushes you up. This will land you in a high area full with mushrooms. As you land, go right, and you have an Oak thingy right at the edge and you can see all the UB magic floating there and the ledge with earth eles. Just glide and oak to it and you’re at the last part of Dulfy’s guide.
Cheers!

I didn’t even try the Dulfy method on this one because it looked way too confusing.
Just from reading your short directions I was able to find it, no problem- very easy.

please just do a video next time along with it, the biomes are confusing af

Wow great instructions, might as well not waste my time on this “guide”, yes I know its on the map, and it around here somewhere. How about a GUIDE that actually tell you something and shows you what to do and where to go. 3 pics and very basic, not descriptive instructions are useless .

All of them are quite easy to find with these pics and if you actually read the description that goes along with them. Thanks for the great guide!

for the Recover Zinn’s twelfth recording you needed to have done the story on that specific character.

that ninth one is terrible :/ Plus I managed to get stuck inside invisible terrain xd

As someone said in the YouTube vid comments, for #13 you can just land on the ledge in level with the cave and simply jump in on foot, no mount or oakheart essence needed.