Arenanet is releasing a competitive feature pack in June with updates to WvW and new PvP season. 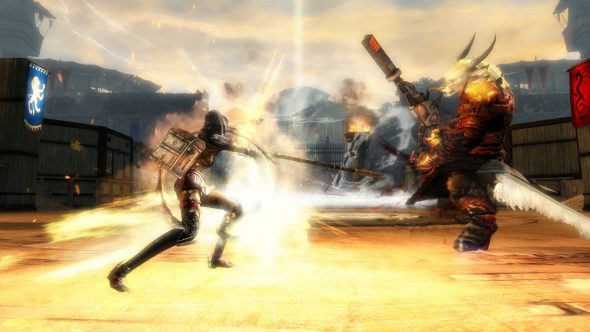 If you love testing your mettle against your fellow players, June is your month to shine! In the coming weeks, we’ll be releasing updates to structured Player vs. Player and World vs. World, along with the start of PvP League Season 7.

Updates to World vs. World will include improved LFG, new rewards, and skirmishing updates! We’re making sure skirmishing in WvW is fun and rewarding with an updated UI and new rewards. Keep an eye on the blog and release highlights in the next few days for more information.

PvP League returns on June 13. Sharpen your blades, and get ready to rock!

Automated tournaments are the future of competitive PvP in Guild Wars 2, and will let you compete in three daily tournaments for a chance to qualify for a monthly tournament and earn prestigious rewards! Structured PvP will also be updated with a custom arena map for 2v2 battles and a new and improved PvP lobby to hang out in.

hope they will add some items in WvW I would want to use my 25000 tokens on.

Hopefully they’ll FINALLY allow us to get those Triumphant Hero armor skins. And hopefully some way for us to continue earning those Mistforged Hero weapons. I already have all the base versions of the Hero weapons, but I don’t have the tickets to upgrade them.

I’ll admit, I’m interested in seeing what Anet’s running definition of “rewards” is at the moment.

Ugh, please let the WvW rewards be good for a change, ya’ll keep giving PvP all the “fun”.

What’s next? You are going to ask for a fun underwater battle system?
Pffffft

That’s a good one actually, I hereby DEMAND a fun underwater battle system!
Satisfied, cause I sure am. 🙂

yep i want an underwater pvp map in the future

…..Truely? People complaining about underwaterfight piss me off!

1. Arenanet has to seperate the traitsystem for landfights and underwatercombat like they do with the skills that automatically change when you dive.
2. The Skills have to be rebalanced and there is a replacement needed for the skills that doesn’T work underwater (in fact they even limited more skills with skillchanges for land like the medikitskill on engineers not working in underwaterfights anymore even you could use them before this change)
3.We need fucking content for underwaterfights!!!!!!!! There are simply said 2 pieces of content that are frequented well in the whole game and that is Rhendak for his state as a special mini world boss and the underwater fractals. And thats because they reward you for doing them unless the whole rest of the underwater play in the game in its current state. They even banned underwatercombat from structured PVP which is a shame as it was a nice map that just lacked for the balanceissues in underwaterfights during the traitproblem.

Frontpage of the papers today: someday we’ll have news.

CNN: this just in, we might have news in the near future

LOL, how’s the esports going for ya Anet?

They think they do but, they don’t.

They’re doing what pretty much no one asks for, and they’re ignoring what most ask for – that’s Anets business |o1

I used to play this game everyday until they released Raids. The Raids killed 3 of the guilds I was in and promoted elitism. I stopped playing when guild mates turned on each other. Thanks Raids!