GW2 gemstore updated today with new Winter in Summer Mystery Boxes that are available as 150 gems each or 10 for 1200 gems. 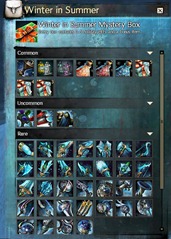 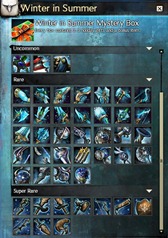 i got winter’s bite greatsword skin, ty anet for 250 gold

I hate you.
Now to rush home for my 3 snowman tonics

Wait, you mean Winter’s Heart Infusion right? Winter’s Presence is the shoulder skin, that would be the most scumbag thing to do if they put it as a RNG item when it required a collection before.

Oh yes, I meant the infusion. The previous poster threw me off because the infusion was the super rare one that dropped from the gifts. Winter’s Presence (the shoulder skin) has never dropped from gifts.

You say something about castlevania… eng dub?
check k i m c a r t o o n (.me)

you didnt hear this from me *fades into dark alley*

How to get the free one?

Get in to the gem-store. Press O.

Nevermind, you should have HoT first to see the box.

Funny I had to find out about this from a third party website. Nice of Anet to not publicize it at all.

Free.
That’s the word that you need to remember.

Free players didn’t get it at all XD

D:
It’s free, except if you are free.
Not so free after all.

One box is free, yes. But they expect ppl to actually buy this shit for 150 gems.

You’ve got to be kidding me. Is that really all they can come up with? I hope it’s because of the upcoming expansion.

after those server lag we had yesterday this all they can update today!?!?!?!

Realease last Living, not this shit. After WvW and PvP, now it’s time for PvE to set some love!

PVE has tons of love. It took 4 years for WvW to get any kind of love. And it took PvP almost as long as WvW. There is so much PvE content you’re practically drowning in it.

I’m not speaking of the whole gw2 release story, I only care about last month and, for what concern it there wasn’t anything new to “drawn in it”.
Usually between a LS episode and the next one there was some current event, even little but still something, now not even that…

Well, that was to be expected. To be honest I had quite a laugh at all these people saying “Dude I played GW1 and we had wintersday in summer there”. You guys need to open your eyes, this is not GW1. Lets hope they will not take full 3 months with episode 6 of LW S3 but I assume that is what’s gonna happen. Good thing is, I got a torch skin worth 80 gold from that free box.

I was really hoping to get the Golem-Man outfit this week. 🙁

I got… an olive dye. Great. Thanks.

I got two reindeer tonics and 4 personalised wintersday presents. yay?

I got two reindeer tonics and 6 personalised wintersday presents. Cower in the shade of my superior giftage.

How can u guys fall for shit promotions like these….

The first box is free. You don’t accept free boxes of shit?

I am obviously talking about anything other then free in this case. They are most of the time scams anyway

I’m pretty sure that everyone commenting here has opened exactly 1 box -.-

I hope. Anything more then 1 is a scam.

So.. Basically a useless box for all that server problem?

I dont get the logic behind these things. I mean seriously, why not make the boxes a once off, cost 200-400 gems and make it a guaranteed unlock of a random skin? Aye the skins are “valuable” but throw in 2.5 skin sets and buyers are unlikely to get one they’d equip anyway — meaning they’d walk away chuffed over their epic, unused steal and anet would get to save themselves 4 wintersday presents and 2 tonics -.-.

There’s no logic in gemstore. There new was. There will never be. People behind gemstore are incompatible with logic on molecular level. Their very atoms reject it.

Exactly what you said. I’ve never seen a marketingteam as bad as A’net has. But it’s not my money, so let them throw it away as fast as they can and will…

I think selling the costumes (it is Fashion wars 2 after all) is logical as well as the items such as: character expansion slot, endless farming tools, more inventory space and the remodling kits.

Those items make sense in the game and they are “extra” conveince type items- they are not required for successful play.

The rest I wouldn’t buy though.

I have to agree with you. Most players I know only get frustrated with these random box things.

I totally refuse to buy them. If they put the skins actually on the market (instead of in random boxes or those terrible chest), I would have probably bought 2 or even 3 of them.

A net lost that cash by putting them in a random box instead…….. (have to wonder who came up with that terrible idea)

Just sell the stuff outright, don’t try to be all tricky/ markety with random boxes filled with mostly crap.

All that really does is piss off your players when they buy ten boxes and get crap.

I have also never heard a player say anything positive about random boxes (chests or w/e) in any game.

So, although ppl do buy them in hopes of getting lucky- they basically just sow bad feelings in your base.

One assumes that these things are profitable or Anet wouldn’t do them. Plus I like having a high quality MMO without a monthly subscription.

The debate I’m harking on about isn’t what would best appease the player base, its what model of rng sale would be most profitable for Anet.

The current system appeals to extremely new players, gambling addicts and idiots. Not the nicest groups to target but the game engines and staff do have running costs.I feel that shifting to flash sales on limited time (limited purchase quantity) gem boxes which guaranteed to return something “valuable” would accrue more income then exploiting excessive gamblers and people that don”t understand that these skins can be bought of the trade post for gold-from-gems for less then the boxes cost.

This is a question of actual statistics and expected trends however, which we unlikely to every have access to unless an MMO actually goes this route and sticks with it.

I am seriously losing my faith, another only gem store update I am not asking for new expansion just give me some events to play with not even pointing that we are getting winter stuff in middle of summer

find something else to do

Not a chance. I barely log in now. Get dailies done and I’m out. Ten to twenty minutes tops. ANet better do something soon. Steam is taking all my money and attention.

I do the same thing. Only thing that I’m looking forward to in GW2 right now is that I’m 9 dailies away from unlocking my 20,000 achievement chest. -.-

Since there is no logic behind some of these gem store items.. Plz Anet.. give us mammoth/elephant lovers a Mini Mammoth..!

So are they doing this to keep us engaged until the expansion? I am getting really bored with it and just log in for dailies. Please, let’s get to this expansion and some new content!!!