The entrance to this flashpoint is on Odessen and there is a mission terminal right before the entrance that allow you to enter it on story/veteran/master modes. To unlock that terminal however, you will need to have completed the Crisis on Umbara storyline.

The entrance/terminal is on the Alliance Staging Room accessed by a new turbolift. 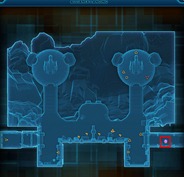 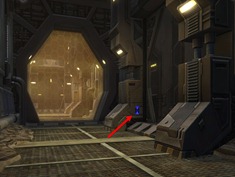 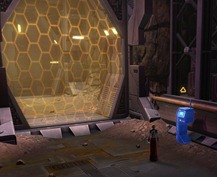 There are three difficulty modes available once you have unlocked the terminal.

Alliance Recon Data is the new currency earned by defeating the bosses in this flashpoint. It is used to purchase various rewards, including access to Trader’s Quarters that allow you to purchase the new Umbara Mobile Base stronghold. However, it is capped at 50 per week and 100 in total. You can see it by going to the inventory and look in the currency tab.

The bonus and last boss of the flashpoint will give you twice the amount of Alliance Recon Data so it is always worth it to do them.

Keep in mind that access to Trader’s Quarters costs 60 Alliance Recon Data so you won’t be able to get the stronghold the first week.

For those that just care about the story, here are all the cutscenes

This is the first pair of bosses you will encounter early on in the Umbara Flashpoint. 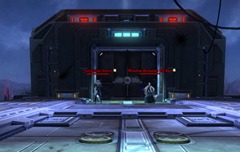 TL:DR Mechanics: Position yourself  for Assassin’s knockback. Kill turrets when they spawn/get upgraded. Need to kill Technician first due to the overwhelming damage he does. Tank taunt after Technician grapple a party member.

Technician and Assassin are a pair that you must deal together. Assassin has an annoying conal attack called Sweeping Slash that follows you and will knock you back quite a distance at end of the channel. Tanks may want to grab her and tank her in a corner (i.e. against the door to the next area) to avoid getting knocked off the train cart. Assassin will stealth out from time to time, reappearing and dropping aggro so tanks will need to taunt the Assassin back right after. 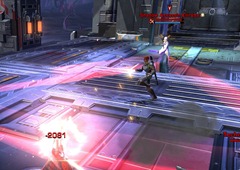 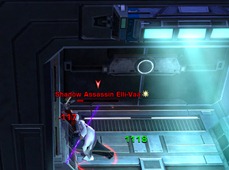 Technician has a grapple attack that can pull players to him and performs a Shotgun Blast right after that does a ton of damage on Master mode. He also loses aggro after Grapple so tank need to taunt ASAP after the grapple (wait for him to pull someone in before taunting). Additionally, he has a mechanic that is triggered when one of the pair reaches loses 25% of their HP. When this mechanic is triggered, the Technician will spawn autoturrets around the map (max of 6 at one time) and go immune (blue shield around him) to perform Tune Up on each, upgrading it and increase its HP and damage. You need to clear out the autoturrets quickly (both non-upgraded and upgraded) as upgraded turrets can do an insane amount of damage if left alive. Killing non-upgraded turrets will prevent him from upgrading it. 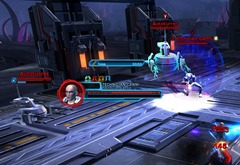 Technician need to be killed first to reduce the amount of Shotgun Blasts as it can kill your party quickly. After Technician is dead, Assassin gains an enrage mechanic and the Sweeping Slash hits much harder but it is an easy ride after that.

This is the bonus boss located in the area where you collect the Adegan Crystals. It is very important to kill him as he drops the twice amount of Alliance Research Data compared to the first and third boss.

Alpha Slybex is accompanied by two smaller Slybex. Killing these smaller ones will give buff stacks to the Alpha, increasing his damage output. Avoid killing them if you can.

Alpha Slybex’s attacks will periodically apply 3 stacks of Poison on its target. These need to be cleansed by the healer as they can deal quite a lot of damage. Sometimes more than one player can get the Poison DoT so healing can get intensive.

His deadliest attack, however, is the Poison Breath. This avoidable conal attack deals massive damage and can pretty much one shot you in Master mode. Tanks and anyone in front of the Slybex will need to move out of it.

Third boss, right at the end of the collecting crystal area. 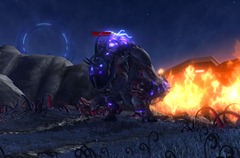 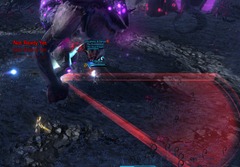 Past 20% he gains Fury and increase the damage he deals by 25%. Save your class buffs here as the damage increase is fairly significant and you just want to burn him down ASAP. He also have a new Acid Burn DoT that he throw on group members that deals a ton of damage.

Last boss at the end of the instance. A bit challenging due to the adds management. 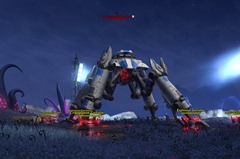 TL:DR Mechanics: Avoid Proximity Burner and watch out for the fire circles. Kill adds ASAP as they spawn and past 15% just burn the boss and ignore the adds.

Past 75% HP however, the tank will spam fire circles on the ground targeting random party members along with Concessive Blast and Proximity Burner. These fire circles do some serious damage and persist for a while so you need to move fast as he drops these circles on you and they do damage immediately. Fire fields and damage from all the ranged adds that spawn can wipe out a group quickly. 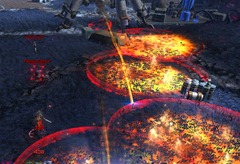 After 75%, Spider Tank will also have a new attack called Turbo Cannon, a channeled attack that does quite a significant amount of damage so healers will need to keep an eye on the tanks.

Adds spawn at 100%, ~70%, ~45%, 25%, ~15% in waves. They can be melee (Shadow Assassin) or ranged (Umbaran Troopers). You need to klll the adds ASAP to lessen the damage on your party. The ranged adds especially can be problematic and DPS need to on them fast.  Past 15% adds spawn on a time interval so you should just focus on burning the boss from that point on. The Explosive Canisters will stun the adds but do little damage to them on Master mode. It is better to clear them out first as they can make it hard to see the adds when they spawn.

Bug: There is current a bug where if you kill the last boss but get killed by the adds, you will respawn at start of the flashpoint and unable to go back in to get your loot.

The vendor for Alliance Research Data can be found just right outside the entrance to Umbara on Odessen. There is an armor set, mount, and access to the Umbara Mobile Base stronghold being sold here. Reuseable Adrenal and Stims schematics are also being sold here. 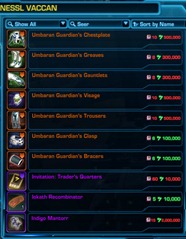 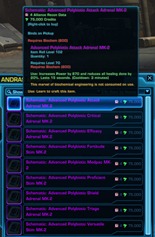 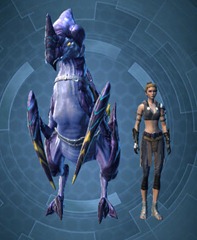 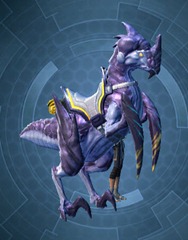 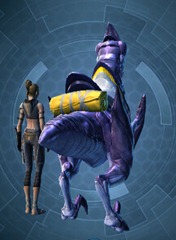 These decorations are random drops off the flashpoint (any mode)