This is a work in progress, more info added soon.

Savage Rift is a new horde defense PvE mode that have you and your allies fight waves of monsters with bosses in between that have a chance to drop boss gear and various accessories. You also earn combat XP and gold bars for defeating specific waves.

Access it by pressing Esc and then clicking on the Savage Rift button. It is only available on the 2nd, 4th and 5th channels (i.e. Velia 2, Balenos 4, Calpheon 5). You must be in the same channel as the rift channel you wish to participate in or there is a very good chance you won’t get in. Players in the same channel have priority. So if you see a channel is reaching high wave numbers, there is a good chance they will fail soon and you can swap to that channel before they finish. You can have the entire party join the same rift by having the party leader clicking the enter button instead. 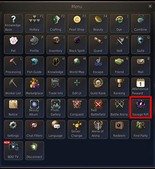 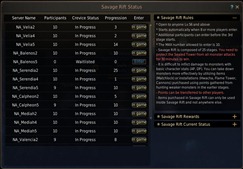 Your goal is to protect the tower at the back of the room from the waves of monsters that comes pouring out from the rift. 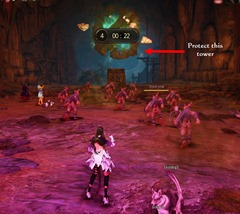 There is a special event going on right now where you can earn titles and rewards for reaching waves 1-25. Rewards will be given out on Sept 27 maintenance but the event ends on Sept 20.

Defeating monsters (getting last hits) will earn you with points. These points are used to purchase weapons and defenses by using the shop interface at the right. You get 30 points at the start, make sure to spend them on Matchlocks!

You can transfer your points to other players using the point transfer button on the left interface for bigger purchases. This is essential to get some of the better defenses such as Flame Towers or Hwacha 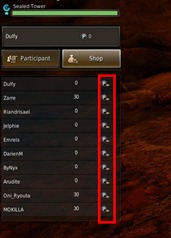 Unlike other type of PvE content, your own weapons are pretty much useless here. You will need to use various weapons that are purchased with points you earned by killing monsters

The absolute essential weapon to have is the basic matchlock and ammunition. It costs 30 points to purchase (10 for the matchlock and 20 for the ammunition. This will allow you to kill monsters much more efficiently. Harpy monsters also appear in waves 8, 13, 18 and 23 that cannot be damaged at all unless you have these matchlocks. 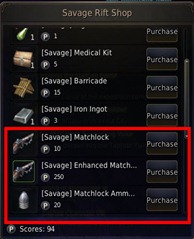 To equip the matchlock and ammunition, you need to look them in your inventory after purchase and equip the matchlock in your mainhand and the ammunition in your offhand. Ammunition have 100 uses only and must be purchased again if you run out.  Each matchlock have 3 shots and you must reload (right mouse click) after you used up these 3 shots.

Once you have more points, you can purchase the Enhanced Matchlock that costs 250 points.This is essential for waves 15+. It deals almost twice as much damage as the basic Matchlock. 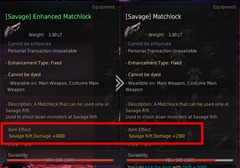 Regular HP pots do not work here so you must purchase these special HP pots for 1 point each. There isn’t much of a use for MP points. They do not work outside the Savage Rift.

If you die in Savage Rift, you cannot resurrect normally (there is no death penalty). Other players must resurrect you by buying the first aid kit for 5 points (Witch resurrection skill does not work here). It is essential to revive other players as if everyone dies, the rift fails and you will be kicked out. Dead players have a green arrow and can be resurrected by walking next to them and use the R interaction button. 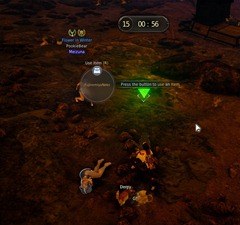 Barricades are essential to establish a chokepoint for your defensive weapons such as Flame Towers and to stop monsters from getting to the tower. Eventually you won’t be able to out kill the monsters that come pouring in so having barricades that hold them off or route them to specific chokepoints will be necessary.

The basic barricades costs 15 points for the basic version. You can purchase Iron Ingots for 3 points each to upgrade the barricades to Iron Barricades that have more HP. It costs 10x Iron Ingot (30 points) to upgrade a barricade. To place barricades, you need to find them in your inventory and right click on them (you may need to unequip your matchlock first). This will open up the interface to drop them like in node wars. 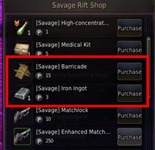 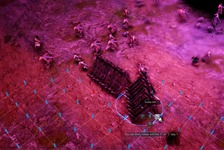 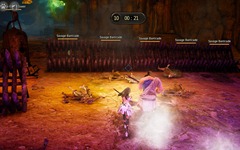 These weapons are essential for mass clearing of the monsters coming in that matchlocks simply cannot kill fast enough. They all require players to man them and need separate ammunition to be purchased and loaded into them. 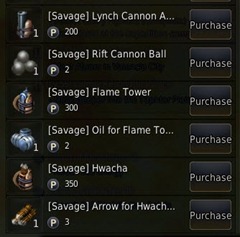 Flame Tower is absolutely essential to place in chokepoints created by the barricades. Unfortunately you cannot place Flame Towers in the back near the tower you are defending so Hwachas will be essential there.  It costs 300 points for the Tower and then 2 points for the oil ammunition. You may need to coordinate with other players to transfer points to enable the set up of Flame Tower. 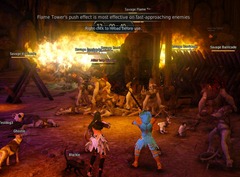 Hwacha is good for clearing mobs from long range and it is good to have 1-2 of them. It costs 350 points and 3 points for the arrow ammunition. Hwacha is essential for clearing mobs around your tower since it can reach the tower and clear out large groups of mobs there quick.

Lynch Cannon is a fairly cheap siege weapon that costs only 200 points and 2 points for the cannonballs.

The Korean players have developed a pretty solid strat for getting to wave 25.

You build a row of barricades side ways starting from the right side (facing the rift). Side barricades allow players to move through freely and monsters will still attack them. Continue this all the way to the lake and seal it off.

You should have 4 Flame Towers built up before round 16. All in front of the barricades. Upgrade barricades to steel barricades afterwards.

There are 25 waves in Savage Rift but it can end prematurely if the tower is destroyed or all players are killed. If that happens, you will receive reward for the last wave you successfully completed.

To be eligible for the rewards, you must have earned points by defeating enemies yourself (points transferred from other players do not work).

Boss spawns at wave 5, 10, 15, 20, and 25. These boss have a chance to drop their respective boss armor as a rare drop or their decorative items. You can also get tokens that can be used to exchange accessories. You must hit the boss monsters at least once to be eligible for drops from them.

Mutant Enhancer can be exchanged for the following accessories 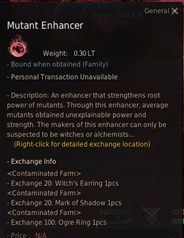