These chests can be only looted once per account (not per character) and will disappear off the map once you have looted them. They give tokens for that region’s reputation, glimmer currency and chance to give you relics for your character’s subclasses.

The chests and the map icons for them only appear once you have completed the story campaign for that area.

There are three region chests in Exodus Black sector of Nessus. 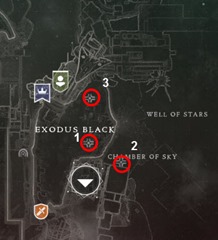 From the landing point, look to the rock to your right. Jump up to it and across to the second rock outcropping for this region chest.

Go right from the landing point until you are close to the chest marker. There should be a cave entrance. Go through the cavern until you see the teleporter and the chest will be on the left of it.

Go north from the landing point and the chest should be on some rock croppings.

There are three region chests in Glade of Echoes sector of Nessus. 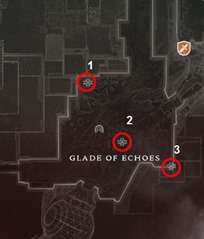 Go to the chest marker and you should see a rock outcropping. Chest is on top of that rock.

There is a container near the chest marker. Go inside and you will find this chest.

The chest is in the corner of the map. To get there, jump on the containers from the last chest and they will take you to the area where the chest is located.

There are three region chests in Artifact’s Edge sector of Nessus. 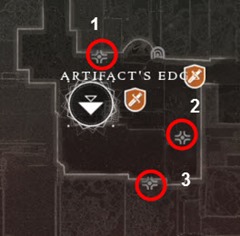 Pretty easy to get, it is at the chest marker on the ground level  and not very well hidden

Same as last chest, pretty easy to find at the chest marker.

Jump on the crashed ship to get to the area where this region chest is located.

There are three region chests in Hallows sector of Nessus. 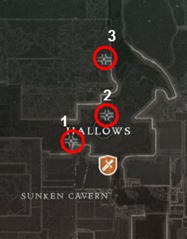 Near the chest marker are two tall rock pillars. Jump on the taller one to get the chest.

Jump through the big hole in the ground that lead you to the lower level. Near the chest marker you will see a little ledge near the ceiling. Jump up to it to get to the chest.

Also on the lower level is the third chest. You have to jump on on some rock ledges to get to this one.

There are three region chests in Watcher’s Grave sector of Nessus. 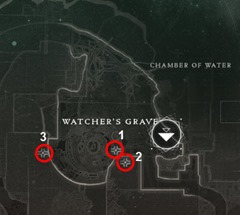 Go to the chest marker on the map and you will see a bunch of stone pillars leading up. Jump up on those and you can find the chest in one of the spacings between the pillars.

From the first chest, look down and jump down the pillar below. Then make a really long leap/jump to this stone pillar and you will find the chest on top.

You can get to this chest either directly from chest #2 or just run to the general area from the landing zone. It is on a very tall pillar. You need to make some long distance/high jumps so it helps to have a character with high mobility or use the blink jump on your warlock character.

There are three region chests in The Tangle sector of Nessus. 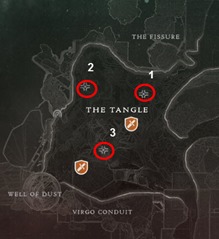 If you are coming from the road leading from Watcher’s Grave, this chest is just over a small chasm that you have to jump over.

From the last chest, jump to the higher plateau and head towards the map marker. Around the map marker you will see a tall tower and a circular ball buried on the ground. Jump on the ball and shoot yourself across to the gap in the tower that has the chest.

Proceed to the map marker and you will see a big tree. The chest is on one of the tree branches in the back.

The last sector of Nessus also have 3 region chests. 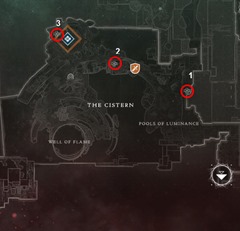 Near the map marker are some stacked square crates you can use to jump into this gap in the wall structure that has this chest.You may have to pick a jump option with strong directional control as you kinda need to turn midair while jumping to get to it.

Close to the map marker is a slanted structure attached to the building. Between it and the building is a gap you can get in and run up. The region chest is next to some beam emitting device.

The last chest is pretty easy, near the edge of the map is a broken circular ball object. Inside it is the chest.